Not your Mother's Milk

Are the Red Hot Chili Peppers riding the mellowship? 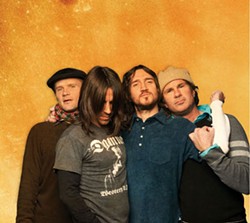 It's kinda hard to believe, but the Red Hot Chili Peppers has been making music for over 20 years now. Honestly, it seems like just yesterday when the members were standing there naked on the cover of Rolling Stone and the only thing hiding their, uh, manhood was their carefully placed hands.

Don't expect any tainted tube socks when the Chilis come to Charlotte on Jan. 23. It's only natural that the RHCP have aged and matured -- sometimes for better, sometimes for worse and sometimes in order to succeed. In the RHCP's case, there are those who might argue that the band has kinda lost its "alternativeness" in recent years. In other words: over the past decade its music has devolved to keener accessibility compared to its earlier, freaky styley days. A close listen quickly reveals when a shift to more a melodic -- let's go ahead and say it -- more radio-friendly sound came about.

In the late 1980s, a new beast categorized as "Modern Rock" radio began to sign on across the country. Here in the QC (where we're always, er, fashionably late), WEND 106.5 The End signed on in 1995. Just a few years prior, the RHCP, who released its first album in 1984 selling only 300,000 copies worldwide, had just reached superstar status with Blood Sugar Sex Magik (1991). With uber-producer Rick Rubin (Beastie Boys, Run D.M.C., Johnny Cash, Tom Petty ... just to name a few) behind the controls, the band cranked out a slew of memorable tracks including "Breaking The Girl," "Suck My Kiss," "Under The Bridge," the title track and the Grammy award-winning, "Give it Away." To date, the record has sold 12 million copies worldwide, making it the band's second most successful selling record.

Their studio follow-up, One Hot Minute, would see the band heading in bit of a different direction, but the harder rock, psychedelic-tinged sound was due in part to temp guitarist Dave Navarro (recruited after a heroin-plagued John Frusciante abruptly quit the band). It would be the following three studio releases (and most recent), Californication, By the Way and Stadium Arcadium, that would have some of the band's old school fans asking California ... whut? And by this time, modern rock stations were just a part of life, especially in a city like Charlotte where, until just recently, college radio has never really been embraced.

"I wonder if it's the RHCP's that have lost their 'alternativeness' or is that when the alternative becomes the mainstream and gains popularity, the early believers don't want to embrace it any longer?" questions WEND Program Director Jack Daniel.

Quite possibly. In the music industry, there's seems to be a vicious cycle that plagues some of the more successful acts. After years of blood, sweat and tears, a cutting edge band becomes a hugely popular arena act and the early fans start shouting, "sellout!"

And even for a band like the RHCP, who've managed to maintain a certain degree of hipness throughout, it hasn't been much different.

Daniel: "They've come to realize that a mass appeal record sells more, and it is called the music business for a reason ... as artists mature they start to hedge their bets to make sure that while they are continuing their 'craft' that they can get a paycheck. That reality often escapes music fans who loathe popularity for a band by anyone, (other than themselves)."

So is it coincidence or plain irony, that sometime around the mid-to-late 1990s the RHCP started to tone down its original funk-fueled, rap-influenced, rock hybrid of music?

Daniel: "I think it goes with the territory. U2 has experienced the same metamorphosis. Neither band is as 'edgy' as they were 20 years ago, and I think it's unrealistic to expect that. Good music is good music to the people who are listening to it and decide they like it. It's a matter of personal taste and preference."

"I field many complaints on the newer Chili Peppers' material, but here's what I am finding: original fans of the band are the ones who are displeased. New fans that maybe have not cared for them in the past ... discovered them with the newer CDs and tracks like 'Can't Stop,' 'Californication' and 'The Zephyr Song' ... these folks loved 'Dani California.' RHCP have broadened their fans and as always there is some attrition."

Maybe that's why the fella who turned me on to U2 in the early '80s refuses to listen to them today. And maybe this should serve as a warning to the Killers, My Chemical Romance, Snow Patrol et al.

One element of the RHCP that can't be questioned, however, is the band's ability to connect with a live audience and well, entertain the bajesus outta ya. At the Arena on Jan. 23, there will be something for everyone.