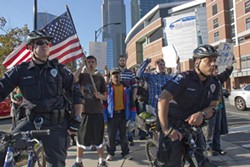 As of this writing, Occupy Charlotte protesters have been camping out at the Old City Hall on East Trade Street for more than a month. In that time, much has transpired for both the local group and the Occupy movement at large.

Occupy Charlotte has endured numerous hurdles, including bad weather, ridicule and a rift that landed protesters in court fighting among themselves. Nationally, New York City sent firefighters into Zuccotti Park on Oct. 28 to seize the power generators that kept Occupiers warm. In Tennessee, on Oct. 29, a reporter for CL's sister paper, the Nashville Scene, was wrongly arrested while covering a protest there. And in Oakland, Calif., demonstrators shut down the city following the Oct. 25 police shooting of an Iraq war veteran who was part of the Occupy movement.

In Charlotte, where the occupation remains peaceful and relations with police cordial, Victoria Suter, who's been camping with the group since Oct. 8, said Occupy Charlotte is growing not just in number but in experience. "We've been learning how to govern ourselves and how to deal with a leaderless movement despite tensions running high and despite snags," she said. "Now everyone's like, 'We can overcome.'"

When the Occupy movement reached Charlotte Oct. 1, there was no leader, and there still isn't, although Tom Shope conducted the initial "mic check" to get the ball rolling on the group's first democratic act: a vote.

There was a buzz in the air that day, a need to do something, to stake a claim. Occupy Charlotte decided to march, and its first stop was its current home at Old City Hall. After taking a group photo, demonstrators marched to Bank of America's headquarters, chanting the now familiar, "We are the 99 percent!" People honked and cheered, some joined in, some yelled insults.

A week later the actual occupation began. An estimated 600 showed up on Oct. 8 and marched to BofA's headquarters. About 30 camped out at 600 Trade St. that night, myself included.

My thought was: How can I truly understand the group if I don't embed myself? Shoving a microphone into faces wouldn't get me far. Occupiers have tried to explain themselves to some members of the local media, but protesters say their sound bites often have been out of context; some consider themselves victims of reporters who had already decided what the story was.

"It's frustrating because they'll interview you for about 10 or 12 minutes, and then just a part of a sentence will be run to try and back up whatever story they had going on," said Luiz Rodriguez, who's been with the group from the beginning. "It required some education on my part, especially when dealing with the TV news."

By the second week of camping, two dozen tents occupied the Old City Hall grounds, and within a month there were about 40. Members organized a kitchen. They began moving tents around to protect the grass. Charlotte-Mecklenburg police stopped by regularly to say hello.

Capt. Jeff Estes has monitored the movement since its inception. "We haven't had any issues. We talk practically every day," said Estes, who said occupation-related costs amount to nothing more than adding together the salaries of officers on duty at the site and during protests. Those costs, he said, would have been incurred anyway and police are not being asked to work overtime.

By the end of the first week, dissent was festering among the Occupiers. They were tired — it was a cold, wet week — and becoming uncomfortable with their de facto leader and spokesman, Shope. He'd promised porta potties and had accepted a donation to get them. When the city denied the request, cracks in the group began to spread.

Blake Barnes, owner of Common Market, donated $320 for the potties through Shope, but the campers only got one toilet (think five-gallon bucket). Shope eventually returned $120. While Barnes will no longer do business with Shope, he remains supportive of the group. "I'm down with what they're doing and am not going to let one little miscue change my opinion," he said.

Dawn Simone, a member of the Occupiers' fundraising committee, was the first to ask questions about where money from an online account Shope started was going. It appeared that nearly $400 had been raised, but campers were not made aware of the account. This didn't sit well, since the group had agreed to rule by consensus. Shope, appearing to some members as paternal and domineering, said he was working behind the scenes in the group's interest, doing things like reserving the name "Occupy Charlotte," another move the group did not vote on. "Maybe that was a little bit bold of me," he said.

It was. The group ousted Shope on Oct. 19, making it clear he wasn't welcome, nor was he to speak on the group's behalf. Shope said he can account for every dime he took in and spent, offering a manila envelope tagged "Occupy" and stuffed full of receipts.

Money wasn't the only issue. Shope accused some campers of being part of the digital hacktivist group Anonymous, and of posting Shope's personal information online. In return, some campers accused Shope of saying he wanted to use their Guy Fawkes masks — a symbol of the Anonymous movement — for target practice. Shope and the campers filed restraining orders against each other. On Oct. 31, they all appeared in court and promised to "behave" for 90 days. That same day, Shope relaunched his Occupy Charlotte website and vowed to stage a comeback, calling the current occupation a "failure."

Action NC's Héctor Vaca disagrees. Occupy Charlotte's support of the social justice group's quest to prevent Latino citizens from being evicted from their homes with little notice spurred concessions from the landlord. "I believe that the [landlords] knew Occupy Charlotte was going to be part of the protest and that's what made them change their minds," Vaca said.

Shortly afterward, Bank of America backed down from the $5 monthly debit-card fees that had raised the ire of Occupiers everywhere.

The Occupiers still face many hurdles, beyond the rapid approach of winter. For example: the Charlotte City Council is considering enacting an ordinance that may make camping illegal. Moves such as this seem to be a challenge from the city for a showdown with police, something no one really wants. We repeatedly asked Mayor Anthony Foxx to comment on this, but his campaign said he was too busy with the election.

The challenges aren't holding back the Occupiers. The group has a tax ID and a bank account at Charlotte Metro Credit Union. It has registered as an unincorporated nonprofit, and secured the help of a team of attorneys working pro bono. And the protests — Saturdays at 3 p.m. as well as smaller ones three times daily through Uptown — will continue for the foreseeable future.

Why? "We are doing nothing less than changing the world," said Rodriquez.