Back to the 'dive' with the creepy door 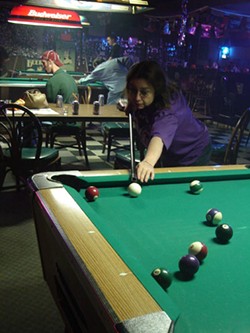 A sign that reads "Jared, get your ass in here" is posted on the cellar-like interior door at the Keg and Cue on South Tryon Street. I described this door and the speakeasy-style slit on the adjoining wall as "creepy" in an article I wrote on dive bars several weeks ago. An apt description, I thought, but the piece prompted owner Kathleen Daly to write a four-page letter condemning me for judging the place without ever seeing the inside.

Kathleen wrote: "[Getting in] includes an ancient sacred ritual where you click your heels together three times, scratch your butt twice and tell the great entity peering through the hole that you would like to come in and fill out a membership card."

Kathleen invited me to return, to make it through both doors and meet some of the regulars. A couple of Saturdays ago, I took her up on the offer.

As I walk into the bar, Kathleen turns down the jukebox volume and announces, "Hey everybody, this is creepy door guy. Everybody stare at him and make him uncomfortable." Somebody in the bar boos.

Photos of club members posing with drunken smiles cover the walls. Signs behind the bar let you know this isn't the lounge or $4-pint-type tavern you might find a mile down the road on Tryon Street. One handwritten note reads, "Absolutely no overnight tabs. No exceptions." A bumper sticker says: "Gun control is being able to hit your target." (When Kathleen turned 38 a few years ago her son Matthew said to her: "Mom for the first time in your life, your age, bra size and gun size are all the same.")

A regular named Angie explains to me that the Keg is "just a redneck bar." Angie isn't talking about the intolerance associated with Southern hicks. The Keg and Cue has had several openly gay members as well as others shaded darker than pale. Angie means that Keg patrons watch NASCAR, play in a pool league and listen to country music on the jukebox.

N.C. law, Kathleen explains, requires bars to receive a minimum of 51 percent of revenue from food sales. If that isn't possible, the proprietor can pay considerable fines or like Kathleen did, become a private club. To join, outsiders must wait three days and pay a $1 yearly fee. Located a block from Tremont Music Hall, Kathleen has to turn away many walk-ins wanting to grab a quick drink before or after a show.

She's never had to "call the law" in the bar's 11 years, but she has had to ban three people in that span. One for trying to steal, one for using drugs and the other for an offense that doesn't seem quite as egregious. An old timer named Abe constantly picked his nose, and one day when Abe's finger was up there, Kathleen yelled at him to stop. Abe stuck one of her pens in his nose instead, knowing that she had a habit of putting it in her mouth. Abe's punishment: a lifetime ban.

At the bar, I ask for whatever the regulars drink, and Kathleen responds. "If you are about to have sex, then I would say alcohol. If you aren't, I'd go with alcohol, too." After spending some time there, it seemed that the most common beverage was a can of beer drunk out of an orange bendy straw. Drinking beer out of a straw? Sounds like fodder for a Jeff Foxworthy bit.

Pranks, tricks and telling the occasional dirty joke seems to be how they pass the time at the Keg. At the beginning of the night, Angie flashes me, explaining this is the standard initiation for new members (male ones I take it). A little later, someone pulls a sign off my back that says, "I'm the new guy. Kiss me." And when I'm in the restroom, another trickster turns off the lights.

Kathleen was raised by her father and likes to tell people she can skin a deer, but she can't hang curtains worth a shit. She is also dominant in pool and claims she can beat 75 percent of the patrons with the back of a broomstick. (I foolishly challenged her and her broomstick and lost.)

Writing is her other passion (hence the four-page letter she sent in response to my 38 words). Her specialty is the horror genre, and she tells me she can whip up a personalized horror story in 24 hours, given someone's three biggest fears. I write mine on a napkin: snakes, ghosts named Henry (see last week's cover story), and ­-- to give her a challenge -- failure.

Two days after my visit, I returned to pick up my horror story and ended up staying for an hour and half (partly because of Kathleen's omnipotent skill of cracking open a beer just as you are finishing the last one). In one of the two horror stories, I turned out to be the ghost in a Sixth Sense-esque twist. I die in the fourth grade via snakebite and live out failure after failure until I finally realize I've been dreaming from the grave.

My second trip to the Keg actually turned out to be the therapeutic bartender advice session I was seeking when I first set out to write about dives. Kathleen helped me cope with my girlfriend leaving town, offering the expert advice of a life veteran who had heard it all before.

So fill out a membership card today, wait three days, then return to a bar where everybody knows yer name.