On Q Productions brings us two for the show 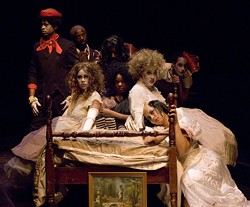 History isn't nearly as tidy or malleable as art. That's why On Q Performing Arts can bring us a season of revolution with a predetermined beginning, middle and end. With Kiss My Black Angst, at a venue where Q has never presented a mainstage production before, the beginning is provocative, exciting and worth checking out before it closes on Sept. 29.

We found the Arts Factory easily enough at 1545 W. Trade St. Just as sweet, we found parking conveniently at the rear. The building is quite contemporary, with a studio theater that resembles the boxagon at CAST's old Clement Avenue location, and a playing area about half the size. The quarters are so unusually tight that when Queen Victoria sidled by the bed in the middle of Funnyhouse of a Negro, she couldn't get by without brushing my knees with the ample bustle of her dress.

Black Angst is actually two one-acts by Adrienne Kennedy and Amiri Baraka, each clocking in at under an hour. Taken together, they paint a vivid picture of the emotions that explode into revolution: pent-up rage and bone-deep self-loathing.

Five years before Portnoy's Complaint, Kennedy's Funnyhouse took the 1964 Obie Award with a protagonist whose self-loathing far eclipses anything Philip Roth would come up with. The madwoman who inhabits that bed, Sarah, is of mixed-race descent. She hates her blackness because her black father raped her white-looking mother. Or alternately — she is crazy, after all — she believes her father raped her mother because she hates her blackness. Sarah also makes two radically different entrances, first bedridden and then sensationally bloodied with a noose around her neck.

Either way, it's a lethal hatred. We tour Sarah's tortured mind with the assistance — I can't quite bring myself to say help — of a mix of imaginary characters, including occasional peep-ins from real people in her life.

We see the imperial women first, Victoria Regina and the Duchess of Hapsburg, then the martyred men, Patrice Lumumba and Jesus. As we move through the surreal, grotesque and disjointed landscape of Sarah's imagination, the women become identified not only with Sarah but with her mother, while the men, strangely enough, are briefly and horrifyingly identified with Sarah's father. Peeping in from one corner of the stage is Sarah's landlady, an earthbound contrast to the august historical figures who share our heroine's boudoir. In the adjacent corner, we get drop-bys from Sarah's Jewish boyfriend Raymond, one last personification of Sarah's aspirations to whiteness. As for Sarah's mom, the source of a weird hair-loss epidemic, you can decide how real and how imaginary she is.

Directing the show, Quentin Talley has a fine eye for the visual details, stationing ornate mirrors in the corners of the set to point up the funhouse motif, and getting best-ever On Q design support from Dupp&Swat for costumes and Samuel Guine III for lighting. But in opting for an all-black cast, I don't think Talley gets the color scheme right.

I'm on board with the folks inside Sarah's mind being black, partly because Briana Gibson is so compelling as the Duchess, and partly because a black Duchess, a black Victoria (Eryn Victoria) and a black Jesus (Dick Johnson) are apt projections of the racial essence Sarah cannot escape. But as heartfelt as Veda Covington is as Sarah, I don't think she'd need to be quite as shrill in her anguish if Randolph and the Landlady — along with their callousness — were white. Actually, Justin Jurrell as the Jewish poet and Elsabeth Mesele as the Landlady give very polished performances, welcome comic relief that is probably far from what Kennedy intended.

On the other hand, Talley has never been more on-target than in his direction of Baraka's Dutchman. Reminiscent of the CAST tradition started at the boxagon, the scene is set by facing video projections, shot by cinematographer Dazzell Matthews, showing Clay as he boards a subway train. Even after femme fatale Lula joins him onstage, the projections persist, simulating the travel of the train and its stops.

I'm not altogether sold on Lula's outré red wig, but it may be necessary to give us some allegorical distance from the ample seductive powers bestowed on the apple-wielding temptress by Karina Roberts-Caporino. The power of her sizzling performance is no doubt augmented by the way Gerard Hazelton responds to Lula's cocktease as Clay, ranging from nervous laughter to puzzlement to slick pick-up ardor, all of it perfectly gauged until the explosive denouement.

Because this is all about the elaborate bait-and-switch game a white-dominated society was still playing with African Americans in 1965, we get a meaty and suspenseful three-part denouement that has a lot to say. It's a pretty damning picture that is far from obsolete in 2012.