Orcs and Goblins and Skaven, Oh My! 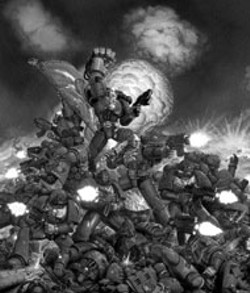 Tuttle was a bit of a latecomer to the group, having moved to Charlotte from Colorado about five years ago. He first got into Warhammer as a student at Appalachian State University.

"It snows up there a lot, so I found a hobby to get into," he said. "The aspect of building and painting an army was really attractive to me. Also, I was working on my degree in physics, and Warhammer was such a great diversion from all the rigorous studying."

Shortly after moving to Charlotte, while browsing at Heroes, Tuttle saw Frazee, whom he recognized from one of the local hobby magazines. The two struck up a friendship, and Tuttle joined the Wednesday night Warhammer sessions.

As Tuttle and Ewing discuss how to improve on their own Warhammer battlefields they've assembled at home, Frazee and Poston get a game going. An expansive 5x8-feet homemade gaming table dominates one of the bedrooms in Frazee's house. Made of plywood, foam and masonite, it's a detailed landscape complete with trees, hills, valleys and a realistic looking stream. It sits above dozens of long, narrow white boxes which house Frazee's sizeable comic book collection. Two eight-foot bookshelves display his vast figurine collection -- separated into Warhammer Fantasy and Warhammer 40k -- and numbering well into the thousands.

Perhaps the only one who has an army that can rival Frazee's is Poston, who won Best Painted Army during the "98 Grand Tournament in Baltimore. Poston estimates he's spent over $10,000 in the past decade on the hobby. When I gasp at the expense, he replies, "It all depends on how you define expensive. I like to use the analogy of playing golf -- you can easily pay $1,000 a year in greens fees. This is the same kind of thing, my hobby just happens to be war games."

Warhammer has its own unique language, and if you're not familiar with its vocabulary, it might as well be Swahili. To try to explain the specifics of the game in a few sentences would be futile. (The Warhammer rulebooks are all nearly 300 pages.) Poston sums up the basics as well as anyone.

"Essentially, you have your force, and the other guy has his force, and you have battles based on different scenarios," he explains. "Each gamepiece has a fixed movement rate and other statistics that determine how tough they are, or how well they fight with a sword, bow and arrow, etc. The randomness comes in when you're ready to attack, and roll the dice.

"You'll see some guys who have done some serious number-crunching to try to come up with an invincible army that can beat everyone," Poston continued. "Of course when you're dealing with a game of luck and dice, the best-laid plans can go awry."

"There's a lot of rules to keep track of," Frazee adds. "And some people have complained that it's too complicated, but then you see 13-year-olds dancing rings around the older guys."

As the two friends situate their armies on the battlefield and work out a plan of attack, I ask them how they first got into a hobby that has since become such a big part of their lives.

"I've always read science fiction, and some of my friends started talking about this game that had space marines like Robert Heinlein wrote about," said Frazee. "It sounded interesting, and I just got hooked."

"Largely, it started out as an alternative to our Dungeons and Dragons group," said Poston. "People were getting older and having kids, and it wasn't as easy to get five or six people together, but we could still get two or three people together to play Warhammer. Plus, I just thought the miniatures looked cool. I've always been the creative, artistic type, and I really enjoyed painting them."

Well aware of the stereotypes many might associate with grown men playing tabletop war games, Frazee and Poston half-jokingly ask if the headline of this story is going to contain the words geek or nerd. I assure them it won't. After all, when you consider how many guys have taken up alcohol consumption or watching the tube as hobbies, perhaps battling your friends across a war-torn fantasy world of heavily armored knights and hulking savages, where humanity's very existence hangs in the balance, isn't so bad after all.