Paranoia will destroy ya | Reviews | Creative Loafing Charlotte
Switch to the mobile version of this page.

Paranoia will destroy ya 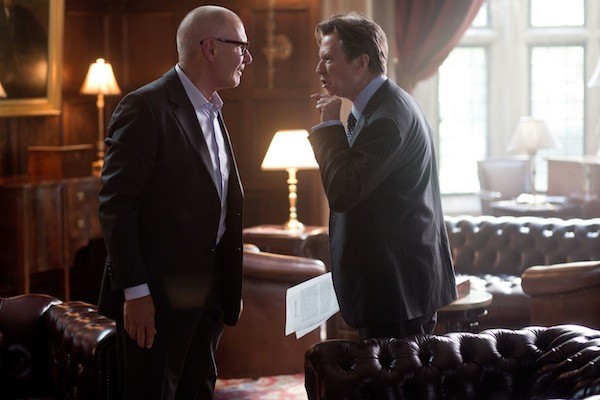 In the 1997 hit Air Force One, Harrison Ford's U.S. president bellows at Gary Oldman's terrorist, "Get off my plane!" The circumstances surrounding that face-off are far more exciting than the ones in Paranoia, in which Ford's crusty CEO yells at Oldman's cranky CEO, "Get off my Facebook page!"

OK, that snatch of dialogue isn't really uttered over the course of the film, but its inclusion might have at least broken the stupor caused by the rest of this grueling, 100-minute bomb. I've seen worse films in 2013 (albeit not many), but I doubt I'll see anything this year as soul-crushingly boring as this techno-turkey, a ridiculous and risible film that's about as thrilling to encounter as a telephone busy signal.

Liam Hemsworth, the younger brother of Thor (Chris Hemsworth), plays Adam Cassidy, who's tired of slaving away for minimum pay at a New York tech firm headed by Nicolas Wyatt (Oldman). Adam and his colleagues hope to improve their lots in life with their presentation of a new cell phone design, but Wyatt is so unimpressed that he fires them all on the spot. As revenge, Adam takes the team out for an expensive night of partying, all on the company's credit card (because, as we all know, entry-level employees not only have access to unlimited corporate funds but also aren't asked to hand over all company property upon dismissal — like, oh, credit cards). While out carousing, Adam meets the gorgeous Emma Jennings (Amber Heard), and it's back to her place for some late-night whoopie.

The morning after proves to be a downer for Adam, though. Knowing that the lad racked up $16,000 worth of booze on that piece of plastic, Wyatt gives him a choice: Go to jail for fraud or work for him as a corporate spy by landing a job with business rival Jock Goddard (Ford) and stealing his secrets. Adam opts for the latter route, and he's particularly startled when he sees that one of his co-workers at Goddard's company will be none other than — holy plot contrivance, Batman! — Emma Jennings. In a city with over eight million people, he ends up working alongside the woman he just met in a bar the night before — in the immortal words of that learned scholar and titan of industry Curly Howard, "What a coinkydink!"

A movie like The Social Network and a TV series like Alias proved that the world of gadgetry and computers can be just as exciting as any car chase or mano-a-mano skirmish, but Paranoia is so ineptly made that the ride home from the theater will be more suspenseful than anything that took place on the screen. Yet the movie isn't just unabashedly dull but also stridently stupid, with plotholes so cavernous that they might as well be sinkholes on Providence Road. Hemsworth's character is as dim-witted as the story surrounding him, and it doesn't help that the actor's performance is so feeble that a raised eyebrow or a pursed lip is what passes for deep characterization. Hammy Oldman turns tend to fluctuate between amusing and annoying, and here it's the latter. As for Ford, whose bald noggin suggests he's been seeing Woody Harrelson's stylist, he's purely in paycheck mode — which, come to think of it, is a position he's pretty much held since tossing Oldman off that airplane back in 1997.