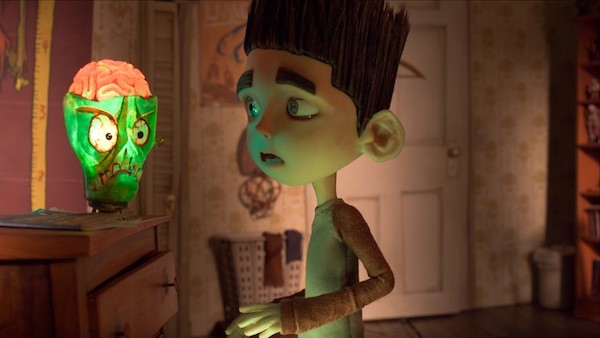 The stop-motion animated feature ParaNorman arrives courtesy of the same production company (Laika Entertainment) responsible for Coraline and Corpse Bride, so parents had best not take their small fry to the theater expecting to see talking cars or dancing penguins or anything else that would send the wee ones off to Dreamland with a smile on their face and a teddy bear (not Ted, of course) in their arms. Instead, this PG-rated attraction is open season on any child who's still afraid of the dark, so it's best to leave them at home watching A Bug's Life for the umpteenth time.

Everyone else, though, can expect a good time from this imaginatively designed and sharply scripted tale about young Norman (voiced by The Road's Kodi Smit-McPhee), a sensitive boy who, like Haley Joel Osment, sees dead people. This ability makes him the freak of his town (aptly named Blithe Hollow, a nod to both Noel Coward and Washington Irving), and only the equally lonely Neil (Tucker Albrizzi), the butt of endless fat jokes, wants to be his friend. But when Norman's estranged uncle (John Goodman) warns him that Blithe Hollow will soon be destroyed by a centuries-old witch's curse, it's up to Norman and Neil — reluctantly accompanied by the school bully (Christopher "McLovin" Mintz-Plasse), Norman's shallow sister (Anna Kendrick) and Neil's lunkhead brother (Casey Affleck) — to uncover the witch's secret, fend off shuffling zombies, and prevent the panicky townspeople from obliterating their own community.

In the wake of toon blockbusters like Brave and the Ice Age and Madagascar sequels, this charming and often very funny piece is bound to get lost in the crowd, but in the chance it makes it to Blu-ray and DVD by Halloween, it's a sound choice to pop into the player ... provided the tots are in the next room watching It's the Great Pumpkin, Charlie Brown.

ParaNorman is not showing in any theaters in the area.