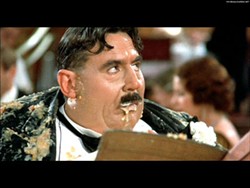 So you say you won't pig out this Thanksgiving. Yeah, right. What mere mortal can resist diving headfirst into a holiday feast of turkey, ham, mashed potatoes and gravy, green-bean casserole, candied yams, cranberry sauce, corn on the cob and pumpkin pie with a dollop of whipped cream?

Not to worry: We're here to help you curb that appetite ahead of time. If you're serious about avoiding a binge, just pop one of these notorious scenes into the VCR or DVD player. After watching these 10 gastronomical gross-outs (listed in order of the queasiness factor), we're willing to bet you'll skip the meal altogether and head right for the sofa to lie down. Or, if you're really sick, you can choose one of these classics of gluttony to be your relaxing, post-dinner, gather-round-the-TV family flick.

"Better get a bucket before I throw up."

And thus begins one of the most notorious sequences ever concocted by the bad boys from Britain: A hilarious marathon of bad taste in which Mr. Creosote vomits profusely (even on the back of the maid attempting to clean up his mess!) in between stuffing his face with an obscene amount of food. And don't forget the wafer-thin mint, which leads to the, uh, explosive climax.

Banned in 31 countries upon its initial release, this Italian gorefest (not to be confused with the previous year's equally controversial Cannibal Holocaust) made quite an impression when I caught it at a midnight showing in Portugal during the early 80s. The countless gross-out scenes in this Amazon-set bloodbath -- the top of a guy's head is sliced off, a woman is hung by hooks through her breasts, etc. -- drew little comment; no, what set the entire auditorium shouting, "Ewwwwww!" was the moment in which a bona fide native picks up a juicy caterpillar and, in loving close-up, takes a big ol' bite out of it.

Writer-director Peter Greenaway's symbolic attack on the destructive policies of Margaret Thatcher focuses on a complacent cook (Richard Bohringer), a vicious thief (Michael Gambon), his mistreated wife (Helen Mirren) and her intellectual lover (Alan Howard); it all ends with culinary cannibalism, one of many scenes that threatened to earn this film an X rating upon its stateside release. There's a popular dessert in England known as "spotted dick"; Greenaway's finale gives the term a new meaning.

In an effort to gauge the dangers of fast food, filmmaker Morgan Spurlock decides to eat nothing but McDonald's for a whole month. This enormously entertaining piece documents not only his health crisis but that of the entire nation -- still, even discussions of high cholesterol levels and livers turning to "paté" don't compare to the moments in which Spurlock, even more of a camera hog than Michael Moore, feels compelled to show us the hair strand he finds in his sundae or his own barf on the ground after he completes his first day of binge eating.

There's no telling what sort of stuff finds its way into the nation's food establishments: I once worked a summer job at a Charlotte movie theater where baby cockroaches camped out in the soda machine spout, and my cousin used to crow about how he and his fellow fast-food employees once took a piss in one of the drink dispensers. So there's an air of exaggerated truth to the sequence in which a burger joint employee (Anthony Anderson) informs Harold (John Cho) and Kumar (Kal Penn) that a secret ingredient was added to the hamburger's special sauce: "Semen. . . Animal semen."

The second Indiana Jones adventure is full of icky sequences (remember all those creepy-crawlies in the hidden chamber?), but who can forget the fine dining experience in which Willie Scott (Kate Capshaw) recoils in horror at the appetizer (eyeball soup), the entrée (chilled monkey brains served in the actual heads) and the side dish (a boa constrictor filled with eels)?

In a future world where the Earth's surface is almost entirely covered with ocean and where drinking water is scarce, a renegade known as The Mariner (Kevin Costner) comes up with a solution for staying hydrated: He creates a contraption that distills his own urine and converts it into water, which we promptly see him gulping down. Hey, a man's gotta do what a man's gotta do. . .

Since we're discussing gluttony, it only makes sense that we include this serial-killer thriller, in which the murders are based on the seven deadly sins. Gluttony marks the first victim, an obese man who's forced by our resident psychopath (Kevin Spacey) to wolf down food until his stomach bursts. The nauseating atmosphere is so pungent in this scene that when Detective David Mills (Brad Pitt) peers into a bucket filled with the man's puke and recoils from the overwhelming smell, we practically feel our own nostrils burning at the rank odor.

ASPCA supporters may want to steer clear of this enjoyable horror yarn in which a hammy actor (Vincent Price) gets revenge on all the critics who gave him bad reviews by killing them during reenactments of Shakespearean scenes. In the case of the portly scribe (Robert Morley) who lavishes all his attention on his poodles, the selected work is Titus Andronicus, as the critic is forced to eat meat pies in which the "meat" is actually his prized pets.