What's so funny about religious pluralism in a free society? 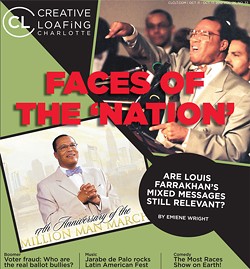 Over the weekend I did something I had never done before and never imagined I would do: I was the lay service leader at my church on Sunday morning.

The reason I never thought I would do something like this is because I never expected to be so intimately involved in a church. I don't self-identify as Christian or Muslim or Jewish or any other faith tradition. Nor do I consider myself an atheist. If I had to pigeonhole my personal belief system, I suppose it would most accurately be humanism.

But I have found a place of worship — a place where I get the spiritual fulfillment I need and desire. I'm a member of the Unitarian Universalist Church of Charlotte. It's a denomination that has no specific creed or dogma; its primary goal is to try and see the inherent dignity and worth of every person on the planet. It also has a rich history. Five presidents were Unitarians, including John Adams and Thomas Jefferson; so were other notables including Susan B. Anthony, Ralph Waldo Emerson and Henry David Thoreau. Contemporary Unitarian Universalist services draw from all of the world's religions, as well as from science, philosophy, poetry and literature. Whatever one's spiritual path — whether or not it's traditionally religious — UU churches are welcoming and inclusive. That works for me.

Like any church or religious organization, however, Unitarian Universalism is not for everybody. Also like any other religious organization, it is often misunderstood. UU's have been called everything from godless devils to lazy thinkers who are unwilling to take specific stands on god and other matters of theology. I could go on about how neither of those statements is true, but that's not necessary nor appropriate in this space. However, discussion of religious misunderstanding is at the very core of this week's cover story about Nation of Islam leader Louis Farrakhan, who will be in Charlotte to celebrate the 17th anniversary of the Million Man March.

The first time Farrakhan's worldview came to my attention was in the 1980s, when some of my favorite musicians began dropping his name and singing (or rapping) his praises. On Public Enemy's now-classic 1988 album It Takes a Nation of Millions to Hold Us Back, Chuck D name-checked Farrakhan on two key tracks, calling him a "prophet" in "Bring the Noise" and in "Don't Believe the Hype," rapping to those who would criticize the Nation of Islam leader, "Don't tell me that you understand / Until you hear the man."

During the '80s and '90s, many other rappers and members of the extended hip-hop community changed their names in accordance with Nation of Islam tradition and regularly dropped NOI references into their lyrics, graphic imagery and interviews, including Rakim, Boogie Down Productions' KRS-One, Guru of Gangstarr, the Poor Righteous Teachers, and later the Wu Tang Clan, Common, Nas and others. Public Enemy's lyrics and media comments during hip-hop's golden age drew outrage from Jewish organizations that characterized Farrakhan's worldview as intensely anti-Semitic.

Even last year, the Anti-Defamation League of B'nai B'rith — whose one-time chair Nathan Perlmutter once characterized Farrakhan as a "black Hitler" — wrote on its website that the Nation's minister has never been more anti-Semitic than he is today. "Not only have the speeches delivered by Louis Farrakhan been among the most hateful of his 30-year career as head of the NOI, but the organization's media arm has also reinforced these messages through a range of propaganda." That was a reference to a seminar on the controversial 1991 NOI-published book The Secret Relationship Between Blacks and Jews, and its updated publicity materials showing a Jewish star over an illustration of a black family being auctioned off during slavery.

Which brings me back to the Unitarian Universalist Church of Charlotte. What I love about that place is that it not only welcomes Jews and Muslims and Christians, blacks and whites and unauthorized immigrants, lesbians, gays, Republicans, Democrats, Libertarians and Socialists — its only creed is to try and find the inherent dignity and worth of all those different kinds of people. Is this too much to ask in a world rife with angry and hostile divisiveness? Is it too much to ask that each one of us entertain the possibility that, as fellow human beings, we're really all in this thing together?