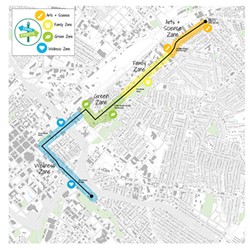 Aside from road construction, concerts, festivals and 5Ks, it's hard to imagine a reason for shutting busy streets down on a Sunday.

There is, of course, the fictional case of zombie apocalypses and other catastrophes that movies have left imprinted on our minds. But that's not what Open Streets 704, happening on roadways scattered about Charlotte neighborhoods on May 1, is about. Describing the event is no easy task. It's part festival and part community gathering with a focus on transportation via feet and wheels.

The route — approximately three miles, so similar in distance to a 5K — will run from NoDa, Villa Heights, Optimist Park, Belmont and First Ward neighborhoods to Memorial Stadium in Uptown.

The initial conception was partly fueled by Susan Patterson (former program director of Knight Foundation), who traveled to Copenhagen, Denmark, a city where cycling works as a viable source of transportation. The trip left an impression on Patterson and got the wheels turning in her head, which led to further support for cycling programs.

The Knight Foundation also hosted Gil Penalosa of 880cities.org — a Canadian-based non-profit organization that promotes community engagement through walking, biking, urban parks and public dwellings internationally — in Charlotte for a lecture. Penalosa, who launched the first Open Streets in Bogota, Colombia, spoke about the program, inspiring Charlotte leaders & initiatives and folks from a variety of organizations and non-profits to hop onboard.

Sustain Charlotte, a nonprofit, plans to make sure the spirit of the Knight Foundation's grant for its bicycle program is recognized through cultural vibrancy, civic engagement and economic equality.

"The chosen route is to serve as a linear park that connects people from all incomes brackets and backgrounds to one another in a dignifying and meaningful way," says Jordan Moore, bicycle program director at Sustain Charlotte. "Gil Penalosa, father of the Open Streets, says that transportation is the great equalizer."

Open Streets events are hosted in more than 100 cities in the U.S. and Canada.

The Q.C.-based event will be scattered across a variety of Charlotte neighborhoods, some of which don't get regular foot traffic. This includes spots like First Ward, Belmont and Optimist Park.

"Open Streets 704 gives us all the opportunity to connect with folks in spots we might not ordinarily visit, or maybe just pass through on the way to somewhere else," says DC Lucchesi, a spokesperson for the project. "There's no reason not to stop now."

The event also raises awareness of proximity to and from neighborhoods on the route.

"The goal is to go beyond just the day of the event, to let folks see that we are in every sense of the word much closer than we think. If for only a few hours on a Sunday afternoon we can eliminate some of the physical barriers between us — like a busy street — the concept will be so much easier to grasp," says Lucchesi. "If we have the chance to explore the neighborhoods and routes, we can get a visual as to how we might also be able to navigate them the other six days of the week, and maybe even gain the courage and confidence to replicate the process in our own neighborhood, commute to work, route to school, and the like."

While Lucchesi admits that without the street closures some portions of the Open Streets 704 route could be dicey, especially for inexperienced bikers, he feels that this event could give more confidence to folks who don't cycle regularly.

"Just as bike lanes give cyclists the confidence to ride alongside traffic, the more comfort they gain there, the more they'll be willing to 'go with the flow' on the rest of the asphalt," says Lucchesi.

Although cycling enthusiasts and longtime riders like Dianna Ward of Charlotte B-Cycle don't fear the streets, she believes that the event could be an eye-opening experience to folks who don't frequently set out on wheels.

"There are a lot of people who are afraid to walk or cycle on the streets of Charlotte. Hopefully someone's life will be changed forever by this experience. Someone is going to bike in the streets for the first time ever," says Ward. "There are people with significant health challenges whose lives will be forever changed by walking or cycling the three-mile course. Hopefully this will enhance people's lifestyles."

Ward's organization, Charlotte B-cycle, is participating and will host a bike valet and rent out bikes for free on during the event.

While Open Streets 704 has some of the elements that are seen in other street festivals and fairs, it varies in its organic, neighborhood-driven nature.

Events and programmed activities will be sprinkled along the route.

"The goals are to involve the entire community — not just the neighbors and businesses along the route — in an afternoon of healthy activity, social engagement, and to develop a whole new perspective as to how streets can more closely connect us rather than serve the singular purpose of carrying cars," says Lucchesi.

The event encourages busking and activity participation. That means folks are welcome to start up their own activities, whether it's double-dutch jump roping, break dancing circles, corn hole or four square tournaments.

Planned stops and activities along the route include an arts and science zone (with music, dance and art), a family zone (with games, demos and more), a green zone (with gardening and wildlife) and a wellness zone (with cooking demos, yoga, and more).

While street closures will affect residents and drivers on the route, Scott Curry, pedestrian program manager for the City of Charlotte, believes traffic flow will be minimal, posing less conflict to regular traffic patterns and detours. Since the event is being held on a Sunday, he believes traffic will be lighter.

As for residents, they are repeatedly being notified of the pedestrian-only route and detours.

"We're hoping the residents along the route see this as a great benefit," says Curry. "After all, we're essentially creating a public park right outside their front door."