Piano Pop In A Hard Place 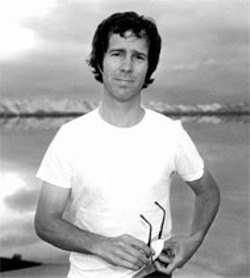 Back in ´95, when Ben Folds was working on the album that would introduce the Ben Folds Five to the world, he wondered what would constitute success. So he turned to one "successful" bandleader he knew, Archers of Loaf frontman Eric Bachmann, and popped the question.

"My measuring stick for success was selling as many records as Archers of Loaf," Folds says when I catch him "decompressing" in LA after a long flight from Australia, where he now spends most of his time. "I remember one night Eric dropped me off at my house, and I didn't really know what to say, so I just asked him how many records the Archers had sold. He said something like 40,000, and that number stuck with me - even after we got popular and I became some kind of 90s one-hit-wonder bitch boy - because last year, when I found out I'd sold that many copies of those EPs I released, I was very happy."

Oh yeah, the EPs. There wouldn't be a Songs for Silverman (Epic) without Super D, Sunny 16 and Speed Graphic, the trio of solo EPs Folds released in 2004. The difficult road that led to Songs for Silverman was full of false starts, breakdowns, and side trips, including a scrapped solo album recorded last year. That one was a follow-up to Rockin' the Suburbs (Epic), his commercially disappointing 2001 solo debut with the unfortunate release date of September 11. Folds' 2004 effort never saw the light of day, though two of its tracks appear on Songs for Silverman. Instead, Folds entered what he describes as a midlife crisis, as he slouched toward 40 with a wife, twins and no band. He did collaborate with Ben Lee and Ben Kweller as the Three Bens; he arranged and produced a solo album for his pal William Shatner, the star-studded Has Been (Shout Factory, 2004); and he recorded those three EPs.

But, confused by his solo debut's lukewarm reception, Folds struggled with the idea of recording a new full-length.

But when each of his EPs found its way to the #1 spot on Billboard's then-new downloading chart, Folds became an unwitting pioneer in pop's brave new digital world. The EPs reintroduced wayward fans to the manchild piano prodigy who has a talent for confessional songs (like his early hit "Brick," inspired by a real-life situation involving a girlfriend and an abortion), a quirky "geek-rock" image, and a wry sense of humor reflected in song titles like "Battle of Who Could Care Less." The bright piano melody that opens the Sunny 16 EP is undercut by the mixed emotions of the song it kick-starts, "There's Always Someone Cooler Than You."

Folds goes on to attack the perennial ugly American from an amusingly skewed angle in "All U Can Eat," a song peppered with gorgeous background harmonies, tastefully jazzy piano refrains, and more than enough f-bombs to keep it out of Wal-Mart.

The Super D EP opens with a guitar-less cover of the Darkness's "Get Your Hands Off My Girlfriend" that makes for a decent tongue-in-cheek piano ballad. And the Speed Graphic EP offers a straight-faced rendition of the Cure's "In Between Days." Each EP is all over the musical and emotional map: a spare piano-and-voice recording of "Give Judy My Notice" (a tune reworked on Songs for Silverman) runs up against the brisk, drum-driven, harmony-laden "Protection." "Get Your Hands Off My Woman" gives way to the sobering introspection of "Kalamazoo."

It's easy to see (or hear) what Folds had in mind when he opted to take the EP route. But in the wake of Rockin' the Suburbs' perceived failure, it was still a risky commercial move.

"It probably came from the same bad business mind that had the idea to play punk-rock clubs with a piano in the first place," he says. "But the music business should also be about music. A German magazine said that if that the EPs had been released as an album, it would be one of the best American albums of the year. This sounds like such an old-dude thing to say, but they actually signed a petition to bring me back to Germany because of those EPs. I played for 3,000 people in Berlin."

Songs for Silverman is full of lyrics that detail the growing pains of a guy wrestling with the downside of domestic bliss. Folks says it has nothing to do with the film Saving Silverman, a Jack Black vehicle that deals with some of the same issues. "I found out about the film after I named the album," Folds says. "I'm sure I heard of the movie somewhere, but the album is just songs for 'somebody else,' songs for 'blah, blah, blah..." I was going to use a real person's name, but I was told I couldn't. So it became Songs for Silverman."

The first single, "Landed," nails a morning-after hangover that follows an interlude of misguided romantic intoxication to an exuberant chorus and a piano hook Elton John would be proud to call his own. The mood ranges from shame to sorrow to liberation, as Folds uses a fragile falsetto to put himself on the line: "And I'm not sorry if you're not sorry/And you're not sorry until I make you..."

On Silverman, Folds goes farther than he ever has to define and reveal himself as himself, not fellow piano men John or Billy Joel. And Folds knows it.

"The Ben Folds Five made a big first impression and it became hard for people to see beneath that. We were 'the piano band that rocks,'" he says. "It was something solid you could affix to the band. But as you evolve, it becomes harder to put what you do into one sentence. Now it's 'the 38-year-old piano dad who had one hit in the 90s showing us his fucking diary.'

"And we came of age in an era when crafting songs about yourself was considered emotionally lewd and pretty fucking dodgy. Irony was in and the singer/songwriter was bad news. So we had to make the songs hard and strong, because I was emotionally lewd on [1997's] Whatever & Ever Amen. The hit song's about my teenage experience with my girlfriend having an abortion. All those songs were as café singer/songwriter as it gets: they just had all kinds of bells and whistles on them to disguise that fact."

Songs for Silverman doesn't lack bells or whistles, as the pitch-perfect Beach Boys harmonies that adorn "Jesusland" attest. But Folds's lyrics are more direct. There's no mistaking the subject of the Elliott Smith eulogy "Late," because, well, the line "Elliott, man, you played a mean guitar" gives it away. "Gracie" is a rockabye ballad about Folds's daughter; "Sentimental Guy" is unadulterated introspection; "Give Judy My Notice" is a bitter, bruised kiss-off to an ex-lover. It's classic and contemporary at the same time. But if confessional songwriting isn't your cup of tea, then no amount of cream and sugar will make Folds palatable.

He knows that, too. "I'm a little scared about the way this album is going to hit people," he confesses. "I'm attached to the music world. I don't live in a cave. I hear all this big fucking shiny-ass shit on the radio. But I don't have to do that anymore. The thing that disappoints me about mainstream music is that we don't seem to be moving away from that. Everyone still has their shades on. And then I think about my little album trying to sink or swim out there with all this gaudy stuff, I get concerned."

I remind him of his discussion 10 years ago with Eric Bachmann. "Yeah, I guess it would be nice to sell 40,000 copies."