Rage Against The Machine | Features | Creative Loafing Charlotte
Switch to the mobile version of this page.

Rage Against The Machine

The revolution continues in hard-driving sequel 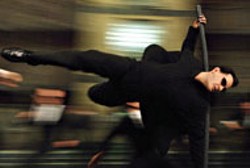 Apparently, it's easier to build a better mousetrap than to build a better Matrix. Still, that won't stop worldwide audiences from beating a path to the box office to catch The Matrix Reloaded, the second installment in this popular techno-trilogy.That The Matrix Reloaded doesn't equal 1999's The Matrix should come as a surprise to no one. After all, the first film in the series was not only a commercial smash that fared well with critics and the Academy (going 4-for-4 on Oscar night), it was also that rare movie that appealed to numerous demographics, winning over young boys and middle-aged women, slackers and CEOs, potheads and philosophers (and pothead philosophers, while we're at it). Perhaps the most influential science fiction film since Blade Runner, The Matrix one-upped Ridley Scott's masterpiece by not only inspiring other filmmakers to copy its revolutionary style but by also establishing a foothold in the real world, as witnessed by its trend-setting costume design (which many tried to connect to the Columbine killers) and by enough on-screen theorizing to justify the publication of at least five books covering the film's heady subject matter (including The Matrix and Philosophy and Taking the Red Pill: Science, Philosophy and Religion in The Matrix).

In other words, we're not talking about the typical "mindless action film" here, not when directing-writing siblings Larry and Andy Wachowski have taken care to include allusions to Christian doctrine, Greek mythology and Zen meditations in their occasionally overstuffed outline for the trilogy.

But for all its attributes, Matrix Version 2.0 never quite rivals Matrix Version 1.0 -- in that respect, then, it's best not to compare it to its predecessor but to its competition in the action and sci-fi fields. On that level, it's hard to be disappointed by this second helping, which offers some intriguing food for thought as well as a pair of smashing action sequences.

Picking up pretty much where the first film left off -- that is, on a future Earth in which machines have taken over and control mankind -- this one finds Neo (Keanu Reeves) no longer a naive, fresh-faced kid grappling with issues of choice vs. destiny and illusion vs. reality but instead an all-powerful entity grappling with -- well, still the same issues, but at least he now has the means to perhaps make a difference in the ongoing war between humans and computers. Or at least that's what Morpheus (Laurence Fishburne), Neo's mentor, believes. Convinced of the validity of the prophecies declaring that The One will be the person to save humankind -- and equally convinced that Neo is The One -- Morpheus feels emboldened enough to go where few others dare venture: to the very core of The Matrix, where, aided by Neo and riot grrl Trinity (Carrie-Ann Moss), he hopes to permanently "unplug" the computers. Easier said than done, of course. A new set of villains, including a pair of scary siblings with dreadlocks and chalk-white faces, manages to complicate matters, as does the reemergence of Neo's old nemesis Agent Smith (Hugo Weaving), who now has the ability to clone himself ad nauseam.

Agent Smith's newfound Xeroxing skill leads to one of the movie's central set pieces, a terrific battle royale in which Neo battles dozens of Agent Smiths simultaneously. At first, the scene looks like nothing more than what we got in the first film -- deft martial arts moves, those groovy "bullet-time" effects -- but as the sequence goes on and on (and on), long past what should be the breaking point, the fight morphs into a ballet of brute strength, not so much a video game simulation (as many contend) as a tribute to the visceral impact of cinematic effects and how, when done right, they can envelop and enrapture us. And equally as accomplished is the film's other conversation starter, a highway chase sequence that lasts a quarter-hour yet, like the Neo-Smith face-off, never wears out its welcome.

The Matrix Reloaded would truly have been something special had the central characters been allowed to grow along with the effects, but, curiously, they've all largely been reduced to treading water. Reeves' Neo has attained such godlike powers (he can even fly!) that he's become something of a bore, a Christ figure without a complex or complexity. Fishburne's Morpheus is reduced to mouthing Kenobi-like statements about Neo's potential, while Moss' Trinity, one of the series' most interesting characters, spends too much time casting puppy-dog looks toward main squeeze Neo. Luckily, some of the new characters compensate, including Monica Bellucci's mysterious Persephone and Lambert Wilson's tart-tongued Merovingian. (Jada Pinkett Smith is largely wasted as warrior-woman Niobe, though one senses she might have more to do in the next chapter.)

The Matrix Reloaded could stand some trimming during its opening half-hour, which is relentlessly talky without being especially enlightening and even includes a rave party that seems out of place. But once the action kicks into high gear, and once the dialogue begins to address the conundrum that informs Neo's every move (specifically, how much of what he does is by choice, and how much is predestined?), the picture takes off and never looks back. And neither will audiences: The final installment, The Matrix Revolutions, will be released on November 5, 2003. Get ready to reboot.