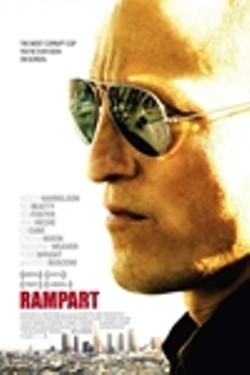 Los Angeles, 1999 - Officer Dave Brown (Harrelson) is a Vietnam vet and a Rampart Precinct cop, dedicated to doing "the people's dirty work" and asserting his own code of justice, often blurring the lines between right and wrong to maintain his action-hero state of mind. When he gets caught on tape beating a suspect, he finds himself in a personal and emotional downward spiral as the consequences of his past sins and his refusal to change his ways in light of a department-wide corruption scandal seal his fate. Brown internalizes his fear, anguish and paranoia as his world, complete with two ex-wives who are sisters, two daughters, an aging mentor dispensing bad advice, investigators galore, and a series of seemingly random women, starts making less and less sense. In the end, what is left is a human being stripped of all his pretense, machismo, chauvinism, arrogance, sexism, homophobia, racism, aggression, misanthropy; but is it enough to redeem him as a man?

Rampart is not showing in any theaters in the area.