It's campaign season and signs are planted in the ground alongside roads and among the front yards of dedicated supporters. But you won't find the typical signs poking out of the grass from the lawn of actor/filmmaker/director Ravi Patel's parents' home in South Charlotte. Instead, you'll find campaign-like propaganda promoting Meet the Patels, a documentary that stars the Patel clan.

Ravi's father ordered the signs and has distributed them to other family members and friends around the Q.C. The family-focused motion picture, co-directed by Los Angeles-based siblings Ravi and Geeta Patel, is slated for release in theaters on Sept. 11.

Indian-American Ravi Patel, who has Carolina ties through his family (he also attended Myers Park High School and UNC Chapel Hill), takes the spotlight in his debut film, which tells the whimsical story of his quest for love and a family union that grows stronger throughout the journey.

At the start of the film, viewers meet Ravi, a 30-year-old guy who has just broken off a two-year relationship with his white girlfriend who he never told his parents about. The timing comes perfect as a family trip to India jump starts his parents push to find him a wife. But what entails is so much more. After the trip, Ravi goes on a series of dates, arranged by his family through community ties and biodata — a matrimonial resume of sorts — sorting.

Mr. and Mrs. Patel, who met through a traditional Indian arranged marriage, relentlessly long to help Ravi find a wife. One of the most compelling aspects of the flick is the Patels' openness. They unleash moments of joy, frustration and love in an organic, natural way that doesn't seem forged for an audience — because in many ways it wasn't. What started out as private family footage and Geeta's camera shooting trials during the family vacation to India, evolved into the public release of the documentary. After five-years of editing, the flick was released and screened at film festivals across the globe, where it received positive reception. It even picked up an audience award at the Los Angeles Film Festival.

"We started off thinking this could be a really good like Michael Moore and Morgan Spurlock type of documentary thing and then it became about me. Even then, we thought this was a movie about me searching for love. By the time we were done with it, what we learned was that it was actually about family," says Ravi, who believes his relationship with his family is more transparent than before the cameras started rolling. 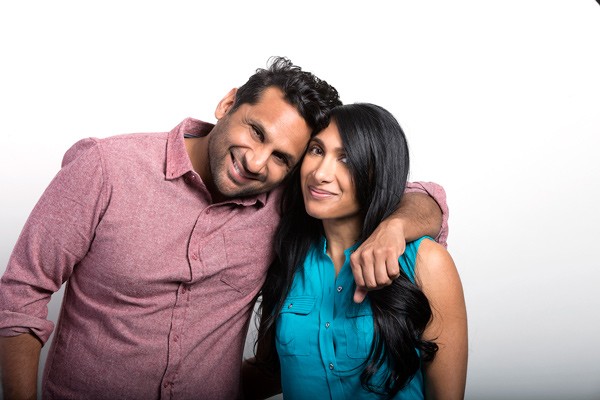 That concept is reassured through the relationship between Ravi and Geeta Patel. The siblings, who had their fair share off fights off camera, pick fun at each other during the course of the film. But there's also a heart-warming respect that develops between the pair, both of whom have similar worries over the cultural aspects of an Indian marriage and pleasing their parents. They bounce ideas off of each other and call one another out when needed.

A highlight of the siblings unity comes when Ravi Patel goes on an arranged date that's filmed by his sister. Afterwards, Geeta Patel probes her brother about the experience and he turns the tables asking her what she thought as an observer.

An interesting element of the film includes animated scenes throughout. "One of the things we did out of respect for everyone in the film was we actually didn't put camera on them during, in a documentary, what would be the juiciest parts," Ravi says. "That was where the animation part came out of. We were trying to find a way to tell these important stories in a way that felt better and didn't feel surrogate."

Overall, Meet The Patels is a film about one family's hopes, love and acceptance. But folks struggling with singlehood will get kicks out of the tremendous efforts made to find Ravi Patel a partner.

Ravi believes that despite the movie's focus on Indian marriage rituals, there's something that everyone can relate to.

"It is a confusing time for dating. I think it's partially because of the internet. I think we're at a time when people are choosier than ever and when we make choices we're not happy with what we have and are always thinking there's something better," says Ravi, who will also star alongside of John Stamos in the upcoming TV series, Grandfathered, premiering on FOX on Sept. 29. In the show he'll play Stamos' character's best friend, a divorcee and charismatic cook in need of guidance.

"Here in America, I think we're trained to believe that the only thing that matters is the individuals and the concept of love, where as in India it's more about the communities and families coming together and it's more about commitment and compatibility. I think when you look at all of them together, you realize that all of that stuff matters. You have to look at the full spectrum and not just one piece of it."