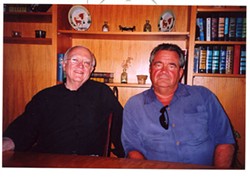 New York City attorney Joshua Colangelo-Bryan met three weeks ago with Jumah al-Dossari, an inmate at the US military prison in Guantanamo Bay, Cuba. When al-Dossari said he needed to visit the restroom, guards walked him to a cell equipped with a toilet. The prisoner was gone for a long time, so Colangelo-Bryan went to check on him. He found al-Dossari hanging from a noose, blood spilling from a cut on his right arm. Precise figures are hard to come by, but al-Dossari was somewhere between the 20th and 40th suicide attempt at Guantanamo.

Charlotte lawyer George Daly told me about al-Dossari last week as he and attorney Jeff Davis and I sat around a the table at a Park Road-area coffee shop. "He (al-Dossari) didn't die," said Daly, "but the lawyer said he did it to bring attention to the plight of the prisoners there."

Now Daly and Davis are gearing up to represent a prisoner in Guantanamo -- a prisoner who, like al-Dossari, asked for a lawyer the only way he could, by getting word out through another inmate who had an attorney.

"(The prisoner's) name is Mazin Salih al-Harbi, he's from Saudi Arabia, and we want to get him either charged or released," said Davis. He and Daly don't know anything else about al-Harbi. Just that he wants a lawyer.

The Charlotte attorneys, like Colangelo-Bryan, are working through the Center for Constitutional Rights in New York, which is coordinating an effort to provide representation to Guantanamo prisoners.

Daly is uncertain what he and Davis will find at Guantanamo. "You don't know what to expect when you go down there," he said. "You meet your client and you don't know if he's going to be psychotic or what. Plus, the government has sent people in to trick prisoners into thinking they're their lawyers, so it's possible you could go all the way down there and then the man won't talk to you because he thinks you're a government agent."

At Guantanamo, called "the gulag of our time" by Amnesty International, the US government is holding approximately 500 men indefinitely and without charges. Daly and Davis say this is contrary to Constitutional guarantees. So does the US Supreme Court, which in June 2004 declared that the Guantanamo prisoners have access to United States courts to challenge their detention. Since then, around 400 American lawyers, including many from highly prestigious law firms like Shearman & Sterling; Venable; Pepper, Hamilton and others have become involved in providing representation to inmates at Guantanamo. The prison camp has earned additional notoriety from reports that some prisoners there are being tortured, largely corroborated by US personnel. The Bush administration claims the inmates, because they belong to no organized army, are not covered by the Geneva Conventions regulating treatment of prisoners of war.

"Some of these people need to be in prison, but we don't know which ones," said Davis. "But we do know the government has imprisoned hundreds of people who didn't deserve it -- and we know that because they've released 250 of them. The thing that's so scary is that even though some of the prisoners were picked up on a battlefield which means it's pretty certain they're combatants, many others were picked up off the streets of Bangkok, or the Sudan, or Detroit. In other words, this could literally happen to you or me or someone you know. Informants pointed fingers at people and some of them have languished for four years for no reason. It's medieval and barbaric. . . .I don't give a rat's ass whether the Geneva Conventions apply to them or not, frankly; they shouldn't be tortured. No one should be. We're Americans. We don't torture people. It's about as un-American as anything you can imagine."

It's also apparently enough to drive some of the prisoners to try to kill themselves, either through a hunger strike that's been going on for two months, or by other means. Colangelo-Bryan doesn't think his client al-Dossari will be the last. "A lot of these men have been told they'll be in Guantanamo the rest of their lives," he explained. "They're exercising what they believe is the only form of control over their own lives they're able to. It just underscores the desperate nature of the situation at Guantanamo -- the desperate need for the rule of law and the fact that the prisoners there may repeat this sort of act in the future, if things aren't drastically changed."

Daly plans to meet Mazin Salih al-Harbi in January, after the FBI has finished checking him and Davis out and has approved their applications for security clearances. He describes what will happen: "You go to Fort Lauderdale and then you fly 3-1/2 hours in a small plane to Guantanamo. They take you to the solitary confinement part of the camp. They bring the prisoner in, in chains hand and foot, and they set you down at a little table with him and a translator and they chain him to a bolt in the floor. There's a guard right outside the door and a television camera; the sound is supposedly turned off but who knows?"

If all goes as planned, Daly will interview al-Harbi, then he and Davis will fly to Saudi Arabia to get information from the man's family members and friends. Afterward, both will go back to Guantanamo and, as Davis put it, "continue trying to get the District Court in DC to either set him free or give him a hearing after he's been appropriately charged."

"The legal part of this is interesting," said Daly, "but the human rights and publicity part of it is equally interesting. Lawyer after lawyer after lawyer are going down there; that begins to tell the American people what their government is doing. And it's fascinating that it's not just the usual liberal voices bringing up this issue, it's also military people and CIA folks who are stepping up. Now, (Vice President) Cheney wants John McCain to change his bill in Congress in order to allow the CIA to torture people overseas. That's unprecedented in American history, as far as I know, for the government to ask for the legal authority to torture people.

"I think it's important to try to do something," Daly continued. "This whole thing is so frustrating, that our government would be doing this kind of thing; so, just to know you can try to do something is gratifying. We'll see what happens."

When asked if they were optimistic about the end result of their efforts, Davis responded, "I live my life optimistically, that's the only way to live."

Daly countered, smiling, "I live my life pessimistically, that's the only way to live. So between us we've got it covered."

Attorneys interested in volunteering for Guantanamo duty should contact the Center for Constitutional Rights in New York, 212-614-6464, nfo@ccr-ny.org.