For Pradeep Gurung, April 2009 marked the end of a difficult time in his family's history. For 18 years, Gurung lived with his seven siblings and two parents in a refugee camp in eastern Nepal. He lived in this camp from the time he was 12 years old until he was 30. His two children were born in the camp; raised on the dirt floors and under bamboo roofs that rarely stopped rainwater.

Just as he and his family were preparing to leave the camp for America in 2008 after going many years with "no hopes and no options," as he put it, his father fell sick. He would pass away before Pradeep's family could make the voyage.

Gurung now owns a house where he lives with his family in east Charlotte. At the beginning of this year, he earned full United States citizenship status.

"I must consider myself the luckiest person in the world," he says. "We have experienced ups and downs. Life can be a bed of roses and a throne of thorns. We knew that. We have lived it and experienced it. Here we are very happy."

Gurung was one of nearly 200 people who gathered in Plaza Midwood on Sunday afternoon to send a welcoming message to refugees in Syria who need a place to resettle.

The "Welcome Refugees" community gathering and potluck was held outside of the ourBRIDGE offices, an organization that helps refugee and immigrant students in Charlotte adjust to American culture, perfect the English language and succeed in school.

After speeches from Jennifer Roberts, still Mayor-elect just a day before being sworn in, and students who have been helped by ourBRIDGE's services, attendees shared food from more than 30 different countries.

Susanna Pradhan, who came to America from Nepal at the same time as Gurung, spoke of being born in a refugee camp. She said she didn't know the seriousness of her situation until she came here. Like Gurung's family, her family was forced out of Bhutan because of their Nepalese heritage, but were not allowed to become Nepalese citizens either.

Pradhan struggled when she first arrived in America in the middle of her third-grade year. She said ourBRIDGE helped her greatly, and in 2016 she will be graduating from Harding University High School with honors.

"Programs like ourBRIDGE help us not only bridge the gap between our former lives and our lives here now, but also to keep our traditions and values with us while we're in a different country," Pradhan says. "I'm here because someone advocated for me and it's time that I advocate for Syrian refugees, who are in a much worse situation than we are."

Sil Ganzo, founder and executive director of ourBRIDGE, said she was excited to see so many new faces in the crowd on Sunday.

"I think people needed a place to show support, because there are so many people that are in favor of Charlotte becoming one of the most welcoming cities in the United States," Ganzo says. "The refugees don't know, so we need to give the people an opportunity to show they're welcome in a stress-free environment."

The political climate in America following attacks by Islamic extremists in Paris and San Bernardino, California has been anything but stress-free in regards to concerns about refugees fleeing violence from ISIS and a long-running civil war in Syria.

On the day following the ourBRIDGE event, Republican presidential front-runner Donald Trump released a statement calling for the banning of all travel by Muslims to the United States. In November, North Carolina Governor Pat McCrory joined more than a dozen other governors, most of which Republicans, in calling for the federal government to cease sending Syrian refugees to their respective states.

Neither the governor nor Charlotte's new mayor truly have the power to stop incoming refugees or bring them in, but Roberts' message on Sunday sharply contrasted McCrory's from last month.

"We are a welcoming city. We will continue to be a welcoming city. Refugees are fleeing violence in their home countries. They fear for their lives," Roberts says. "They are industrious, they are productive, they arrive here with documents, with papers, with legal status. We need to do everything we can to let them be successful and to continue to welcome them into our community."

As a former foreign service officer for the U.S. State Department, Roberts has more insight than most into the screening process for incoming refugees.

"I have worked with the United Nations and the High Commissioner for Refugees. I know that vetting process and I have every confidence in it. I know that we should continue to welcome refugees," she said. "If you look at the main street businesses — the dry cleaners, the convenience stores, the gas stations — it's more than 60 percent that are owned by immigrants (along the Central Avenue corridor). We couldn't survive as a city without the energy and vitality of immigrants."

Although Gurung says he has been treated well by Americans in his time here, the current climate of fear-mongering and Islamophobia has made it more difficult for Muslim-American families.

Nareefa and Marjana Abdallah (names changed upon their request) are an Iraqi-American couple who were settled in Charlotte in 2009. They were not given a choice as to which country to live in, and were terrified upon arriving here without knowing anyone. They had lived in Baghdad and then Amman, Jordan and were used to the bustling streets there. Charlotte's emptiness scared them.

"In the beginning when we came you always hear America is something big, that you say, 'Wow,'" Marjana says. "Then when we came to Charlotte, we thought, 'What is that? Just a village?' Because the buildings are small. The houses are far apart."

Her husband was not comfortable on the streets without the crowds he was used to.

"For us, if there are not people in the street, that means the city is empty. You may see one or two people walking here; that's scary," Nareefa says. "If you see that in our country it must be the middle of the night or something is wrong."

Soon, things became more personal for the family. Almost immediately, the couple's nine-year-old daughter began getting harassed and was confused by the things classmates told her about her own religion.

The daughter, now in 10th grade, wears a hijab around her head. This year a teacher told her class as she sat there that Muslim people are terrorists and others are not. Her mother went to the school to complain, but nothing was done.

"We have terrorists here but never would a teacher say, 'Oh, all Americans are terrorists,'" Marjana said. "I talked to the counselor and told her that Americans are the biggest threat to my country and never have I judged any Americans or told one, 'Hey, you destroyed my country.'"

Nareefa says he leaves it up to the government to screen refugees because they know better, but that he wishes people would stop generalizing Islam and lumping him in with terrorists. He has lost three family members to terror attacks in the Middle East, he said, and does not like being compared to hate groups.

"It is not a problem of Islam, it's a problem of terrorism," he says. "These terrorists are not Islam, they will kill me before you. If you are alive you are threatened. They are killing in Iraq and Syria more than in America. My life is in danger as your life is, so you cannot say it is Islam, you can say it is those groups."

While politicians and social media pundits continue the debate, the refugee and immigrant population in Charlotte continues to grow, and it's been getting harder for ourBRIDGE to keep up. 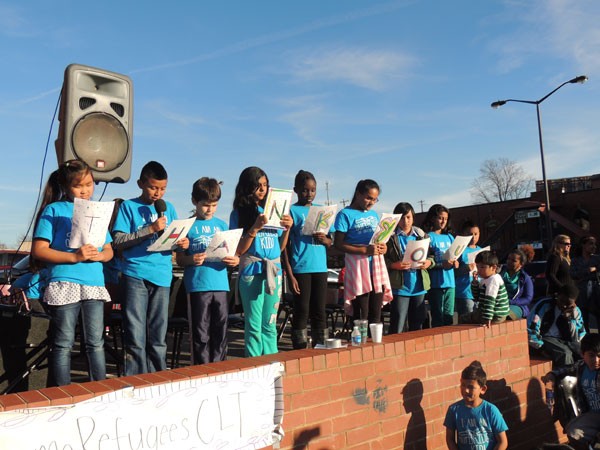 Earlier this year, Ganzo began looking for a bigger space near Central Avenue to house their offices and couldn't find an affordable one within the right area to reach their key demographic. She said she estimated about 2,000 newly arrived students need ourBRIDGE's help in the five east Charlotte elementary schools the organization works closest with. She also hopes to expand to middle schools soon.

Now, an old friend might be able to help.

Thomas Morgan is an award-winning filmmaker who worked with ourBRIDGE when he lived in Charlotte. He now lives in Singapore with his family and is currently working on a documentary about refugees in Lebanon. He said his goal is to connect the story of refugees in a camp in the middle of Beirut with the stories of those recently settled here.

He plans to use funding and resources from the film to build a community center in Beirut and new ourBRIDGE facilities in Charlotte.

"It's desperately needed. The population of refugees is growing. The amount of work and the amount of necessary facilities and positions is growing and I feel like I'm speaking to the choir here," Morgan told the crowd at the event, "but hopefully our message can reach beyond the choir. We have two of the largest banks in the world right here. It's ridiculous that I'm calling a guy in Germany to see if he can build a structure in the United States and he says, 'Are you kidding me?' But hopefully we can engage people here and show the incredible work that Sil has done."