Review of American on Purpose by Craig Ferguson 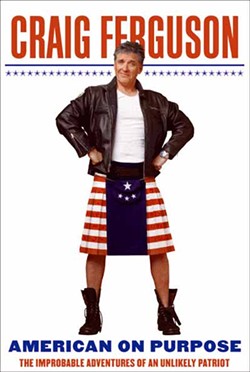 Craig Ferguson, the host of The Late Late Show on CBS, is a recovering alcoholic, workaholic, smartassed, impulsive, and earlier in life, a philanderer. He's also a very good writer, and he's produced that rarest of books: a show business autobiography that's not a load of self-serving whitewash. Ferguson is an irreverent and reflective writer, too, the result of which is that American on Purpose is funny, poignant, and, to cut to the chase, one of the best showbiz bios ever. The key is Ferguson's honesty.

Born in Glasgow, Ferguson was raised in suburban Cumbernauld, which the BBC declared was the second worst place to live in Great Britain, losing out to a town named Hull. Ferguson disagrees with the choice of Hull, saying, "I've been to Hull, and although it's indeed a first-rate shit-pile, it's got nothing on my home town."

The book, funny and fast-paced, is riddled with snarky, humorous asides like that one which, in a way, give readers some insight into how Ferguson survived his rough upbringing. He had loving parents, but opportunities were few and far between in Cumbernauld. Early on, he became fascinated by the '60s space race, and, by association, America.

As a teenager, he visited an uncle living in New York City and fell in love with the city and thrived on America's peculiar energy. He determined then and there to live in the U.S. one day. He returned to the U.K., quit school at 16, worked various jobs, got drunk a lot and dabbled in drugs. Actually, "dabbled" isn't the right word for Ferguson's drug use at the time. "Dove in headfirst" is more like it. Pot, hash, acid, coke, pills, heroin; if it was around, he tried it. And tried it. And tried it. Ferguson admits, "I have an addictive personality. I'll try something a hundred times just to be sure I don't like it."

Ferguson evaded responsibility as if it would kill him, like many young men. He tried various occupations: construction worker, punk rock musician, you name it -- he even married and moved to New York for a while -- and eventually got into theater. His description of performing in an extremely low-budget avant-garde play in London is nearly worth the price of the book alone. The leap from theater to stand-up comedy seemed a natural move, and he eventually became one of the most popular comedians in Britain, performing a rage-fueled act under the name Bing Hitler.

He moved to Los Angeles in 1994, scrounged up a few acting jobs, and wound up on a sitcom with Marie Osmond, which he quit when he couldn't take the lousy writing anymore. His big U.S. break happened when he landed a substantial part on The Drew Carey Show, playing Carey's boss Mr. Wick, with an exaggerated English accent ("to make up for generations of English actors doing crap Scottish accents"). He then wrote and starred in three films, including the worth-looking-up Saving Grace. His stand-up career took off, and he was the first person CBS asked to take Craig Kilborn's place when the latter quit The Late Late Show.

In January 2008, Ferguson became a U.S. citizen (after answering one of the test questions, "Who wrote the Star-Spangled Banner," with "Francis Scott Key and Puff Daddy"). Three months later, he was the "designated comedian" at the White House Correspondents Association Dinner, an experience he recounts in the book's first pages, including an unscheduled one-on-one conversation with George W. Bush.

Running through Ferguson's story are his ongoing, raging battles with alcoholism, which he had conquered by the time he came to the States. As he told his late night audience in 2005, he hasn't had a drink since 1992. "Occasionally," he admitted, "I'm tempted to have one beer. The problem is that if I have that one beer, I wake up in Tijuana four days later with a tattoo and a sore ass."

He's remarkably honest about his "relationship issues," and what a crappy mate he's been in the past. Ferguson is in his third marriage; he has one boy, Milo, by his second wife. He's his own most severe critic, but he has a knack for softening the blows with a brilliant combination of candor, wit and defiance. Humor eases the blows a bit, but it's obvious that Ferguson put himself, and some of his loved ones, through very hard times. What's refreshing, though, is that unlike many Hollywood stories, Ferguson's doesn't include self-pity, blame, kissing-and-telling, wise gurus, sudden enlightenment, or Jesus-in-a-blinding-flash. What you get is just a decent, very talented guy with manic energy who grew up hard and made his way, making tons of mistakes in the process. It's somewhat a miracle that Ferguson made it, as his actions in this autobiography make clear. The fact that he came through it all with his sense of humor and self-respect intact and strong as ever, is a good thing for everyone.

American on Purpose: The Improbable Adventures of an Unlikely Patriot by Craig Ferguson