Right Side of the Tracks 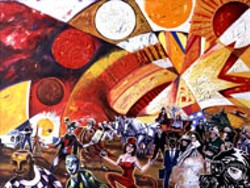 NoDa, Charlotte's most established renegade arts community, has crept a little further north, across the railroad tracks. Sanctuary Art is the newest installment to Charlotte's only counter-cultural community. The new art gallery is an easy walk down Davidson Street, past 36th, past Boudreaux's, over the tracks and around the bend. There you'll see The Colony, a new development of residential condos and street front retail shops.The crumbled sidewalk becomes new and makes a hard right, straight to Sanctuary Art. Here, artist and now gallery owner Jerry Kirk displays his potent visual brew.

Sanctuary Art is haven for entrenched veterans and nomad newcomers, the known and the unknown. I predict we will be served up the rebellious, risque, ridiculous, and perhaps, one day (one can only hope) the reviled. But not yet -- we're still exhaling from Angels in America. Is Sanctuary Art an extension of Charlotte's only scary art scene -- NoDa, that down-at-the-heels, ragged village of sensitive souls and mad dogs sniffing out a home? Well, no and yes. Sanctuary Art is second generation NoDa, the legitimate spawn of Talent and Persistence. Kirk is first generation NoDa, a founding father of the offbeat tribe that rooted here in the early 90s. Given the original pioneers' paltry resources, vulnerable management skills and dubious choice of neighborhood, it's a small wonder this once shaky satellite still orbits Charlotte's beaux arts galaxy 10 years later. It's done more than survived -- it's thrived and now expanded.

Everything inside this gallery is clean, well lit, well framed, new. The walls aren't dinged, the floor doesn't move under the weight of your feet, no one's smoking reefer in the parking lot. Nothing resonates with the seedy, tattered fringe, the slumped sidewalk freak show ambience of the old 23 Studio and Pat's Time For One More Gallery/Bar. Nothing in the clean, crisp lines of the Colony development, home to Sanctuary Art, reeks with the nose-curdling promises of decay and rebirth.

Nothing except the art. The artwork is still NoDa. The art still carries a bit of the shock of the new, and that will likely be this gallery's lifeblood. Kirk has assembled artists he likes -- some friends, some sought-after out-of-towners, some hits, some misses. The work is a Studio 23 Upgrade, a reflection of the director's tastes and the opportunity to take his solitary vision public. In the next few years, Kirk will sink or swim on his choices, but he's begun with his head above water.

Haas' paintings are line and extravagant color and World Wrestling Smackdown fighting to the death. They are an idiot savant on a blistering roll. They are not morning people.

Raed Al Rawi was a recent recipient of a fellowship at McColl Center for the Visual Arts. Rawi's ethereal and comical images of floating beds and flying pigs streaming over shimmering wheat fields are serene enough to seem familiar, even expected. His paintings remind me of dreams I meant to have. Floating fish and flying donkeys with briefcases -- Charlotte needs that kind of traffic.

Randy Crawford is Marcel Duchamp on thorazine. Marcel would be amused with Crawford's idea of coffee stain as art, though I think he would have preferred it remain as an idea or accident. Crawford has blurred, blotted, stained and wiped his way through the decorative possibilities of coffee on canvas. The stuff works better in your belly.

Rusk Masterson, artist and musician, is tighter and more contained than his Eclipse brethren. He says he believes "in the rhythmic motions of time, space, life and thought. The expression of that rhythm is my main concern." His paintings are quite small, his beliefs are admirably expansive. I wish his paintings were larger.

Kirk has many of his own paintings here, some from his own hand, some from the hand of his caffeine-stoked alter ego Tony Java. Kirk continues in a now established path that approaches broad human issues -- death, love, desire, salvation -- using both historical and anonymous characters, sane and maligned, which invade his prodigious imagination.

"Chaos Troubadour (March of the Republicans)" depicts the arrival of Jesus carried by Amish buggy, accompanied by a host of players marching fretlessly toward the Apocalypse. It's Mardi Gras merged with a funeral procession. Soldiers, tanks, secret servicemen, Superman and Moses, nuns, clowns, masked men and a stylin' Moolah. This confederacy of dignitaries and dunces forges a path beneath a sky of orbiting planets in an enraged sky -- chaotic, fiery, explosive. I get the feeling the man is either warning us or making fun of us. Am I paranoid? Is he? Should we all be?

Kirk's Jesus and Elvis series has the King of Hosts and the King of Rock hanging out together in a grocery store, a bar, a theater and riding along the coast in Elvis' pink Cadillac. The pair appears distant and chummy at the same time.

The photographers were the best part of my visit to this show.

Nemo Nieman is a successful commercial photographer who is obviously in love with Ireland. So who isn't? I've seen a thousand photographs of those verdant landscapes, but none quite like Nieman's. All his photographs are digital black and whites.

The images appear magnified, like chin stubble resembling tree trunks, detailed microscopically. Nothing is close-in or tightly cropped, but impossibly clear, as if my vision improved three-fold in the last five minutes.

No fog in these Irish dales. No color. Void of the too often seen luscious greener-than-green ancient Irish hills appeal, these photos can't trade on the lush "n' lovely card. Drained of the chlorophyll effect, the photographs show the ageless hills and ancient structures as sculptural and stark and remote. The loss of color robs the land of romance and you still can't stop looking. That's a good thing.

Bradley Thurber photographs strippers hanging out in industrial wastelands. His images are technically faultless visual essays on love in the ruins. Women sit, walk and stand in what appears to be set locations waiting for Tony Soprano to strangle someone. Young, beautiful women wearing little more than suggestive and exhausted expressions in abandoned train yards, junkyards and condemned industrial waste sites, flesh rubbing up against rusted steel.

The juxtaposition is jarring, but initially the women seem to fit. Not because of who they are or what they do, but because they appear to feel at home in the vacant steelyard, comfortable in their own skins, completely vulnerable and still unafraid.

Oops, I can't maintain that tired naughty fiction long. Their tattoos and tough poses won't free these women from looking like newborn babes tossed in a junkyard. Looking "at home" turns into looking a little lost and feeble and silly. And looking like they're already dying and they've barely been born.

This show runs through the end of June.

On Crawl night, Friday, June 6, artists from Sanctuary Art will perform live art acts in and around the gallery. Come see if they can perform under scrutiny. The gallery is located at 3440 N. Davidson St. Call 704-877-2692 for more info.