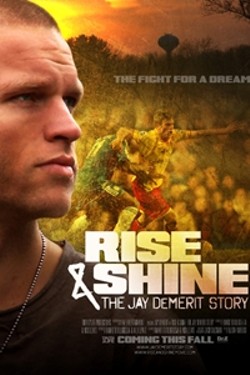 Rise and Shine: The Jay DeMerit Story is the true story of a young American's impossible journey - a journey never experienced or heard of in the soccer world. After college, Jay's dream of playing pro soccer in Europe seemed unreachable. Sleeping in an attic, painting houses and eating beans and toast to survive, Jay took the most unlikely route to the top. After not making the professional leagues in the U.S., Jay left for Europe at the age of 21 without any professional experience - only a passport, $1800 and a backpack full of dreams. The film documents Jay's journey from the bottom - playing in Sunday park leagues and lower level division London clubs earning 40 pounds a week - to playing in the English Premier League - to starting in the 2010 World Cup. Featuring US National Team players Stuart Holden, Tim Howard, and others and cameos from Wayne Rooney, Didier Drogba and more, the film tells the story from Jay and the people who lived it.

Rise and Shine: The Jay DeMerit Story is not showing in any theaters in the area.