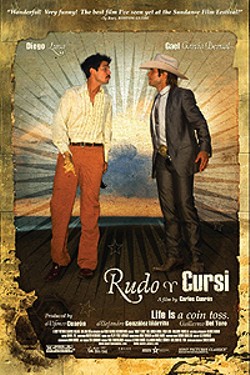 Beto and Tato are a pair of rivaling, dim-witted brothers who work on a dusty banana ranch and play soccer for their local team. Beto, a goalie whose hot temper on the field earns him the nickname of Rudo, dreams of becoming a professional soccer player, while Tato wants to be a famous singer. They both share the dream of building a big house for their mother, Elvira, but all of their desires seem completely out of reach, that is, until a talent scout, Batuta, discovers their skill on the field. To Beto's chagrin, it is Tato, whose curlicue field play earns him the nickname of Cursi, who is chosen to become a star player. Not to be bested, Beto scores a goalie position on a rival team, further intensifying the competition between them. But success makes the brothers confront their own personal demons and sets them on a chase for more than just soccer balls. Cuaron keeps the energy high and the laughter rolling even as he crafts a moral into the story. But even if the dueling brothers do find a way out of the banana ranch, will the banana ranch ever find a way out of them?

Rudo y Cursi is not showing in any theaters in the area.