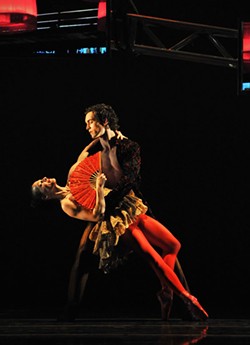 Suspense built steadily last Thursday at Knight Theater as we awaited the world premiere of Sasha Janes's Dangerous Liaisons. Had the former principal-dancer-turned-choreographer at North Carolina Dance Theatre overreached in attempting to distill the intricate epistolary De Laclos novel into a mere 50 minutes? Would the original live music, composed and played by cellist Ben Sollee, suit the decadent elegance of this quintessentially French tale? And how could anyone replace Kara Wilkes as femme fatale Marquise de Merteuil, let alone Rebecca Carmazzi, the blooming mother of three?

As the tension was mounting, we had the pleasure of seeing a reprise of Dwight Rhoden's Artifice, first presented at the Belk kicking off NCDT's 2007-08 season. David Ingram, who would play rakehell Valmont after intermission, was no less central to Artifice as Joker Swing King, putting on moves that ranged from Chaplin to Elvis. All 10 satellite characters were activated by Joker's will or imagination, and all — including Joker — had robotic, Toys-R-Us tendencies as we went from an opening harlequinade to carnival to Vegas before reaching a full Elvis immersion and wallow. From this fantastical swirl, Jamie Dee emerged as Joker's girlfriend/nemesis, Grace unto Blue, while Anna Gerberich as Loop Purple Pop stood equally apart, doing her customary soubrette shtick amid the prevailing seediness.

Then as the curtain finally rose on Dangerous Liaisons, we found Sollee perched high above the stage with his cello. He sang an original song by way of prologue, and that, sadly, was the last of Sollee's voice. But the rest of the score wasn't merely cello as the composer cued up pre-recorded music with foot-pedals while his perch conveyed him up and down like an elevator. So yes, Janes added choreographing a cellist to his already bulging to-do list. Another unexpected part of the spectacle was John P. Woodey's video design, a mélange of abstraction, portraiture, cursive writing, and — in the denouement — crimson spider webs. All of this was splayed across three banks of video monitors that spanned the stage.

Janes did more than merely call upon the mother of his three kids to deal with the absence of the long-limbed Wilkes. He and his design team made necessity the mother as they changed the costume concept and themed it. We first saw Merteuil in an insane asylum, swaddled in a fiery red ribbon that two attendants unraveled as the Marquise's reminiscences began. Instead of the S&M rig worn by Wilkes on the program booklet's cover photo, Carmazzi wore a less revealing costume design by Jennifer Symes, its most distinctive feature a pair of flaming red stockings — the same shade as her future straitjacket.

What remains is more than sufficiently steamy. In the "Meet Valmont" scene, the Marquise is kept waiting as Ingram copulates with two courtesans simultaneously, Melissa Anduiza and Sarah Hayes Watson, the sizzling threesome silhouetted against a sheer screen. Janes eschews the usual balletic lifts and jumps, more likely to send his characters rolling instead of flying. But what distinguishes Liaisons — and makes it a sure bet to be reprised in future seasons — are the two sword dances that Janes contrives to put in his scenario. Of course, there's the climactic duel when the apprentice in cuckoldry, Chevalier Danceny, learns that he has been cuckolded by the master, Valmont. So wily that he can outwit himself!

As finely as this fatal scene is danced by Ingram and the nobly athletic Pete Walker, it is upstaged by the great ensemble sword dance four scenes earlier. Men and women in this taut "Scene 6: Fencing" are alternately romantic and adversarial as they pair off, fencing one moment and dancing the next. Sometimes each of the dancers has one foil, and sometimes the men or the women wield two. Every step and thrust of the way, the clash of weapons is precisely timed, turning them all into percussion instruments. Magnificent.