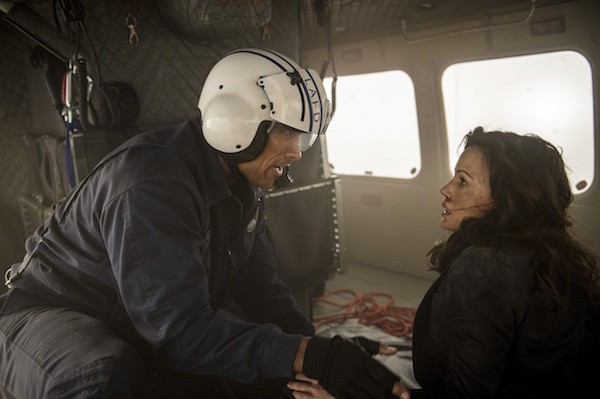 The new disaster flick San Andreas features an earthquake that measures 9.8 on the Richter scale, but on the cinematic scale, the film itself only rates a 5. That's actually not too bad a number, considering the dismal quality of most of the similar shake 'n' bake duds that pass through theaters, whether fantasy-based (Battle Los Angeles), history-based (Pompeii) or imbecility-based (2012).

San Andreas, which basically pits The Rock against tons of rocks, offers the common theme of personal problems set against a massive backdrop. And while Bogart's Rick Blaine in Casablanca opined that "it doesn't take much to see that the problems of three little people don't amount to a hill of beans in this crazy world," in the disaster genre, the problems of the little people are paramount. In the case of San Andreas, the three would be Ray (Dwayne Johnson), an LA-based search-and-rescue helicopter pilot, his wife Emma (Carla Gugino), whose inability to crack her husband's defenses following a past tragedy has left her no choice but to file for divorce, and their daughter Blake (Alexandra Daddario), whose inner decency matches her outward beauty.

Hanging around another part of the plot is Lawrence Hayes (Paul Giamatti, lending necessary gravitas), a Caltech seismologist whose own research has revealed that a gargantuan earthquake is set to hit California, with most of the damage occurring in San Francisco. Sure enough, disaster wallops the West Coast, and it's up to Ray to rescue first his wife and then his daughter, the latter off spending the day with her mom's new boyfriend Daniel Riddick (Ioan Gruffudd). Riddick's a wealthy architect, the sort of workaholic who calls his skyscrapers his "kids," and he's eventually revealed to be a heel molded in the same cartoonish manner as Billy Zane's Cal Hockley in Titanic. But while Blake can't count on Riddick for her survival, she does encounter brothers-in-arms in the form of British siblings Ben and Ollie (a winning pair of performances by Hugo Johnstone-Burt and Game of Thrones' Art Parkinson).

The 1974 all-star idiocy Earthquake is notorious for the casting of 52-year-old Ava Gardner as 59-year-old Lorne Greene's daughter, so rest assured there's nothing that daft in any aspect of San Andreas. The actors play their likable characters with conviction, making it easy to sympathize with their plight, and the special effects are consistently excellent, with some visuals that really pop in 3-D. But after about an hour, the picture hits a brick wall, settling into a measured routine that grows tedious. How many times does a character smile and relax, believing he or she is out of danger, only to be faced with another crisis within milliseconds? It's this film's equivalent of the horror film trope wherein a cat suddenly leaps into the frame, scaring the protagonist but boring the viewer, and it occurs repeatedly. And as the mayhem grows more monumental and the rescues more outlandish, the film loses much of its initial personality and settles into standard-issue CGI chaos.

Still, there's enough wholesale destruction that FX junkies might return for more. "What now?" someone asks The Rock's Ray late in the film, and we half-expect him to answer, "The sequel, if this one kills at the box office."