Saving Mr. Banks: Author of Mary, quite contrary | Reviews | Creative Loafing Charlotte
Switch to the mobile version of this page. 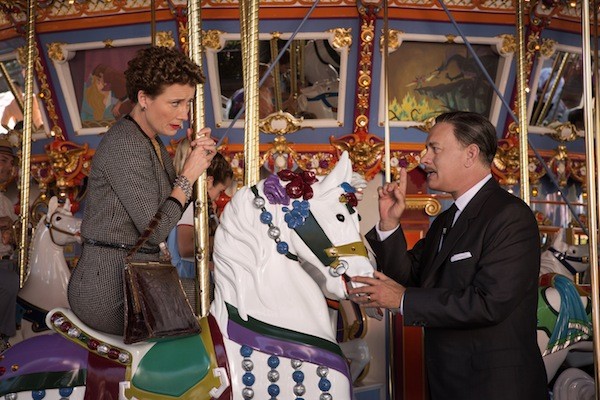 The beloved 1964 film version of author P.L. Travers' Mary Poppins finds the title character (played by Julie Andrews) describing herself as "practically perfect in every way." It's almost guaranteed that some modern-day quote whore — maybe Peter Travers (no relation to P.L. Travers, I assure you) — will serve up a blurb to the studio's ad department describing Saving Mr. Banks with those exact words, but don't believe it for one moment.

Now, if someone wants to describe this new picture as "practically pleasant in every way," I won't take as firm a stand. Saving Mr. Banks is pleasant for much of its running time — at least the sections that follow how, in 1961, Walt Disney (Tom Hanks) ended his 20-year attempt to get Travers (Emma Thompson) to meet with him to discuss bringing her novel Mary Poppins to the big screen. Travers had spent two decades refusing to allow her cherished character to become cheapened in a Hollywood production, but with her finances growing tight, she has little choice but to at least entertain the possibility of a motion picture adaptation. Yet as soon as she sets foot in Los Angeles, she becomes impossible, and Disney and his Poppins partners, scripter Don DaGradi (Bradley Whitford) and composers Richard and Robert Sherman (the enjoyable tag team of Jason Schwartzman and B.J. Novak), do everything in their power to please her. Yet her demands in terms of the film version (for which she has yet to sign over the rights) are tough ones: no Dick Van Dyke, no animation, no songs and — why not? — nothing colored red in the entire production. Yet as history has proven, the film did get made, it was a huge critical and commercial success, and Disney and Travers allowed all their differences to melt away and lived happily ever after.

Or at least the film would have one believe — in truth, Travers was so offended by the movie and by Disney's treatment of her that she refused to ever do business with him again. Of course, this wouldn't be an apt ending for a cheery holiday release produced by — you guessed it — Walt Disney Pictures, so the sour notes are relegated to the distant past, in the flashback sequences that show Travers as a young girl (played by Annie Rose Buckley) living in Australia with a loving but alcoholic father (Colin Farrell) and a weak-spirited mother (Ruth Wilson). These segments are meant to provide the psychological impetus for Travers' actions later in life, but it's facile material and takes time away from the more entertaining segments that find the author contending with all the California dreamin'. Certainly the most factually bogus storyline involves Travers' relationship with Ralph (Paul Giamatti), the chauffeur the studio assigns to cart her around, and yet it's also the most uplifting piece of the film, thanks largely to Giamatti's turn as a man whose eternal optimism won't be broken by anyone.

Thompson is fine as the persnickety author, but the one-note nature of the part hardly makes it a stretch for the actress. And Hanks is suitably avuncular as everyone's Uncle Walt, though it's hard for him to disappear in the role of so familiar a person. After all, Disney was more camera-friendly than any studio mogul in history — and not just because he hosted over 300 episodes of The Wonderful World of Disney — and it's easier to believe Hanks saving Private Ryan than saving Mr. Banks.