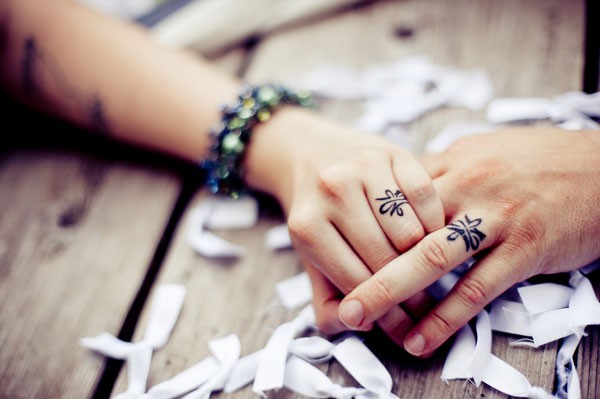 "It feels like taking a hot bacon-grease shower with a 9-volt battery attached to your dick."

That's how the artist at NoDa's 510 Tattoos describes the process he recently endured to remove the small diamond he and his ex-wife got tattooed on their ring fingers during their marriage. The diamond, which three grueling laser treatments reduced to a small, dark-purple circle, probably looked like a freckle compared to the colorful sleeves he sports on both arms. But what the tiny mark lacked in size, it compensated for in meaning.

With the advent of Pinterest came an increased interest in finger tattoos, particularly those that signify commitment, Kotula says. The website features hundreds of thousands of photos of fresh finger ink, owners gushing about their lover's initials or the date of their wedding ceremony, permanently ingrained in their skin. But ask one of them to take a photo of their finger in five years, and that pretty little diamond will probably more closely resemble a lump of coal.

"[Finger tattoos] are big no-nos in my opinion ... because they don't heal well," Kotula says. "Your hands and feet shed skin every day; the rest of your body about four to six weeks. And on the very tops of your fingers, the pigment tends to spread faster." (Sometimes practicality trumps common sense: Kotula got his tattoo because he doesn't like wearing jewelry.)

"They won't come out and say 'I'm branding my wife,'" but it's implied, Kotula says.

Men in the military are also more likely to request an initial or wedding-date tattoo for their significant others. "They're going to be deployed, so they push it as an extra little 'Don't sleep with my buddy while I'm in Afghanistan'" measure, he says.

The tattoo enthusiast offers advice and some alternatives for anyone contemplating inking themselves in the name of love. If you select a commitment tattoo based on how easy it will be to cover up later, should the relationship end, reconsider getting one in the first place. If you think your love will last for eternity, think about a place for a tattoo other than your hand. Not only do hand tattoos fade, but they also may affect your future employability (and that's coming from a guy who tattoos for a living). Consider getting a matching tattoo that signifies something greater than the relationship. Barring the diamond, Kotula remains fond of the matching tattoos he and his wife collected in a few of the cities they visited together.

"I'll sit with people and ask, 'What are you guys into?' and try to figure out a matching tattoo for them," he says.

Many couples are opting for conflict-free, environmentally friendly rings. Examples of this are wooden, lab-created, simulated or recycled bands and diamonds, which are all free from the baggage of human rights abuse and environmental harm from mining. Buying a vintage gem or shopping from sites like www.simplywoodrings.com and www.nodirtygold.org can ensure you purchase your wedding rings responsibly.

Some couples are also going for alternatives to traditional bands, with finger piercings or kitschy trends indicative of current culture. Tweet-Rings (www.tweet-rings.com), for example, are bands that can be inscribed with favorite lines from your or your significant other's social media accounts.