His partner of 15 years, Ron Sperry will be standing by his man at the Feb. 25 event 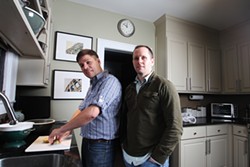 In conversation, Bishop and Sperry refer to themselves as an "old married couple," but they are not actually married. They could legally marry in Bishop's hometown of Boston. They could form a recognized civil union in Sperry's hometown in Illinois. But they choose to wait until gay marriage is legal in the city they call home. "It would seem bizarre to go to another state to get married. Our friends are here. North Carolina is our home," Sperry says.

"Oh sure, it's disappointing," Sperry adds. "What a wonderful thing it would be if we could [be married], but we don't need a marriage certificate. It would still be an amazing thing to have that happen."

Bishop completes the thought: "Getting married to me would just be the formalization of what we have now."

Sperry and Bishop moved in together not long after they started dating. "I was not looking for something long-term," says Bishop. Get them talking about the very beginning and there are lots of laughs — and a few missing answers. The exact details are fuzzy, but both agree they met on a Tuesday night at a now-long-gone neighborhood gay bar not far from the bagel shop they now visit each Saturday morning. Bishop, the more serious of the two, was 29 and an up-and-coming project manager at Ernst and Young when they got together. He was newly "out" to his friends and family, and had seriously dated only one other man.

Why did Bishop wait until almost 30 to come out? His partner of more than a decade wants to know, too. "Yeah Scott, why did you wait?" Sperry asks with a smile in his voice.

"I guess it was a matter of becoming more comfortable with myself," Bishop answers. "I mean, I knew, but I didn't want to admit to it. I think moving here, away from my family, allowing myself to figure out who I was, being more comfortable with myself ... it allows you to tell everybody." Bishop wanted to tell his parents in person and remembers specially planning a weekend getaway to their Boston home. "I actually told them on National Coming Out Day, Oct. 10, 1996." He remembers sitting outside and telling his dad, who hugged him and said simply, "I still love you."

Bishop's mom took a few months to get used to the idea, but she now regularly contributes to the HRC and proudly reads its newsletter every month.

Sperry had a different coming-out experience. Grinning, Bishop points to his partner and exclaims, "He told his mom when he was 12!" Sperry's older brother was gay. "It was a recognized thing in our house," Sperry says. "We already understood the concept of gay, so it wasn't a big deal at all. I felt like the support group was already there. Everybody already understood what it meant. I didn't have to explain anything to them."

Besides, Sperry adds ruefully, "I had to define normal for myself anyway." His father had a hook in place of his arm after being shot down behind enemy lines as a paratrooper during World War II, he says. "So there were a lot of things in my family that were just normal, whereas other kids might have been like, what's that? To me, it was all just normal."

There seems to be a new normal in Charlotte these days. Most recently, voters elected the first openly gay City Council member. And, of course, planning is well underway for the Democratic National Convention, which comes to Charlotte in September. This is all on the heels of the last presidential election, when North Carolina went blue for the first time since Jimmy Carter. Bishop played a big role in those milestones. He successfully helped with LaWana Mayfield's council run and now works full time as the director of project management for the DNC host committee.

The LGBT community has been a large part of the Democratic Party for a long time, and this year, Charlotte, as the DNC host city, is expected to welcome more LGBT folks than any other previous political convention. Its leaders have repeatedly said they are working to make this the most open and accessible Democratic convention ever. "The local LGBT community was a big part in helping to bring the convention here," says convention CEO Steve Kerrigan. He points out that the gathering is not just about officially nominating the president, but also reaffirming what Democrats stand for. "Diversity is a big part of the Democratic Party and who we are."

Kerrigan hedges when asked about the possibility that the anti-gay marriage amendment could pass in the same year that the Democratic spotlight is shining on Charlotte. "My hope is that it will be defeated in May, and we are going to continue to push the president's agenda," Kerrigan says. "I believe the president has said this, that we should not be enshrining discrimination in any state constitution, and I'm truly hopeful it won't happen in the state I'm calling home."