Chefs and owners dish on what goes on back there ... and on the irksome habits of some diners 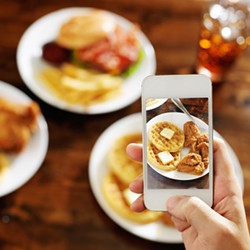 It's been 15 years since celebrity chef (and my personal heartthrob) Anthony Bourdain unintentionally blew the lid off the restaurant industry with the publication of Kitchen Confidential: Adventures in the Culinary Underbelly.

He wrote about the camaraderie of the restaurant kitchen — of "working together in a confined space under extreme pressure." He made it seem dangerous and alluring. Bourdain taught the dining public that eating out could be risky. He cautioned us not to order the fish "special" on Monday because it was probably left over from the weekend. I remember being stunned — but also thinking it made sense. Of course, no one was getting fresh seafood delivered on Monday.

"Monday? It's ... when whatever is left over from the weekend is used up, and hopefully sold for money," Bourdain wrote.

Bourdain's warning may have been true in 2000. But no longer.

"We can get shipments of fresh fish pretty much every day of the week," says chef Stephen Schmitt of Wolfgang Puck Pizza Bar at Phillips Place. "Since Bourdain wrote that book, there have been large improvements in the way fish is packaged, held and the time it takes to get from dock to door."

Whew, that's a relief. But then we wondered what other secrets we could get a few of Charlotte's favorite chefs and restaurateurs to share with us.

Local is the new black

When Bourdain wrote Kitchen Confidential, Pacific Rim cuisine was the big, new thing. The locavore movement wasn't yet a gleam in anyone's eye. Now, it's practically a cause célèbre. Some restaurants even boast of herbs and veggies that came straight from the chef's home garden.

Jason Pound, chef at Soul Gastrolounge, believes in local but cautions not to take "buy local" as gospel. "I get my bacon from Benton's," he says. "They do a better job than I could ever do. Just because you see 'house-cured' on a menu doesn't mean it's the best bacon out there."

Bourdain warned diners against Sunday brunch because it was often the restaurant's B-team working it.

Frank Deal, owner of East Boulevard Bar & Grill, says brunch can be a nightmare for servers and kitchen staff. He recalls a Sunday morning when he was first working in the business — at a now-closed restaurant on East Boulevard — when one of the line cooks used salt, rather than sugar, in the cinnamon rolls.

"During brunch, you get an influx of people from three different churches all at once," he says. "When you've made 40 pans of muffins, and the first one comes back, you know 50 million are on their way back. You can't recover from that."

Deal discounts Bourdain's theory on the people who cook brunch being the also-rans. "You hire people who are good at brunch," he says. "Eggs are so simple, but you have to know how to do them. And you have to do them right the first time."

At brunch, more than any other meal, there's no time for mistakes. "You do a whole shift of business in about an hour-and-a-half," he says.

We diners have Yelp, Facebook, Twitter, Instagram at our fingertips. Just as we talk and tweet about where we're getting good (and bad) food and service, the wait and kitchen staff can dish about us, too. (But just not in a public forum — unless they want to get fired.)

For example: "Someone once asked for mussels in Alfredo sauce," Wolfgang Puck Pizza's Schmitt says. If you've ever had mussels — or Alfredo sauce — you realize that ordering the two together is like ordering Kung Pao chicken au gratin.

Some unusual combinations (chocolate and bacon) work. Others are potentially disastrous. In culinary matters, the customer does not always know best.

"One time, someone requested a four-pound lobster," Schmitt says. "We didn't have lobster on the menu, and the larger ones don't have as good flavor."

Schmitt says his restaurant always tries to accommodate special requests. But he adds, "There are special requests in the sense of wanting to replace a vegetable — and then there are requests that essentially overhaul the dish. We want to make the guest happy, but we must also protect the reputation of the restaurant."

Pound agrees. He says he and his staff are happy to prepare meals for takeout ... if the dish is still going to look and taste good when you get it home. Sushi works as take-out. Ice cream, which people have asked for to-go, does not.

Diners can also be sneaky. Schmitt says his restaurant has had diners claim to have an allergy to a particular ingredient, when they're trying to make extra sure the ingredient they don't like doesn't show up in their dinner.

"We take our customers' health (and their allergies) extremely seriously," Schmitt says. "We are happy to accommodate special requests. We just ask that the truth be told about allergies so we don't take unnecessary, extreme steps in the kitchen to avoid the food allergy."

That sounds so ... professional. Definitely not the anything-goes kitchen Bourdain described in 2000.

Pound says the phenomenon of taking food photos has altered the restaurant experience for guests and the kitchen staff. Diners may not realize how much texting and photo-taking can delay service. Soul's wait staff has been known to check in with a table three and four times and no one in the party of four will have glanced at the menu because they're all on their phones.

When you ask your waiter to take your pic (oops, guilty!), you're keeping him or her from other tables. And from your own. "It dilutes the art of good service," Pound says.

Bourdain painted a picture of a restaurant kitchen as a naughty, testosterone-filled den of swearing and sin where the staff was often hungover or worse. Pound recalls those days but says the restaurant business has since been elevated to a respectable profession. "The kitchen isn't a renegade, outlaw place anymore," he says. "There's a different class of cook today."