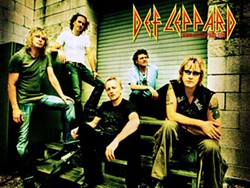 
The founder of the Art of Living Foundation, HH Sri Sri Ravi Shankar, will be in Charlotte to teach his unique meditation and stress reduction techniques. Sri Sri Ravi Shankar has taught his breathing techniques, derived from ancient elements of yoga and ayurveda, to people all over the globe. Sri Sri's main message is that quality of life depends on the quality of the mind, where stress-free living can enhance the entire being. Art of Living Foundation, based in Bangalore, India, is one of the largest volunteer-based NGOs in the world and celebrated its 25th anniversary earlier this year. Sri Sri Ravi Shankar will talk about "Success Without Stress" at McGlohon Theater tonight and will present a day-long seminar at the Extravaganza Depot on Saturday. For further details call 704-299-1790 or visit artofliving.org/charlotte. (Shukla)

Let freedom ring -- It's Independence Day! Except this time, substitute the fireworks and hotdogs for a night of French cuisine and drinks, as the French American Chamber of Commerce of NC celebrates Bastille Day. The 6th Annual Bastille Day Festival celebrates France's liberation from a constitutional monarchy and will host an array of entertainment including a mime, juggling and French music. Not to mention, guests will be able to purchase $5 raffle tickets for prizes, including a pair of round-trip tickets to Paris. Looks like celebrating Independence Day twice this year could be an explosively fun idea. The festivities are free and will be held from 5-9pm at the Wachovia Plaza. For more information call 704-841-0506 or go to www.faccnc.com. (Marta Ostrowski)

Headlining Carlotan Rock 2006, the Carolinas' only Latin Rock festival, is the way-fun, Grammy-nominated Venezuelan pop-funk band Los Amigos Invisibles. Other national acts slated to appear are Louisiana's Palo Viejo and the Washington DC-based Papas Underground. Local acts performing are La Rúa, who started the ever-burgeoning (it now includes amigos in Asheville, among other area burgs) festival in the first place, as well as Bakalao Stars, La Marea and Sin Recursos. The show at the Neighborhood Theatre starts at 8pm. Admission ranges from $15-$20. Details at 704-358-9298. (Davis)

In his Laugh Yo'Self 2 Life Comedy Show, Jonathan Slocumb refuses to compromise as he entertains with clean comedy suitable for the entire family. Having appeared on such cable fare as HBO's Def Comedy Jam and BET Tonight, it's hard to believe he's never slipped up and let fly a four-letter bomb. But he really does live up to his billing as "quality family entertainment." Known for his role as "Clyde the Slide," the Hi-Top stuck in a '70s time warp, on the national syndicated sitcom The Steve Harvey Show, Slocumb is the first African-American comedian to be warmly received by churches. This time around it's University Park Baptist Church, 6029 Beatties Ford Road, at 7:30pm. Ms. Toni Jinwright will open. Tickets are $13 in advance and $15 at the door. Order online at www.ccauthority.com or at 1-877-777-4TIX. (Calloway)


Last year Def Leppard marked a quarter century of recording melodic hard rock. This spring the boys released Yeah!, a marked return to form of the old days, albeit with an album of covers of songs from late '60s/early '70s rockers. Leppard ruled high school battle of the bands, radio airwaves and MTV in the '80s, all the while drowning out the critics with damn catchy guitars. Fellow much-maligned and also mega-selling rockers Journey, sans Steve Perry, will open at Verizon Wireless Show beginning at 7:30pm. Tickets range from $28.50-$75. Call 704-522-6500 for suggestions on hair teasing as well as info for the show. (Shukla)

Snap your fingers and shout Ole! It's time for some salsa dancing, live Latin music and sizzling cuisine as Paramount's Carowinds celebrates the culture of the Carolinas' Latino Community in Celebración Latina, sponsored by DeporVita. Tonny Ferrer plays Latin lover with songs from his latest Entre Suenos while comedian Louis Thomas' impressions leads the audience in a game of "Guess Who?" The weekend event ends on Sunday, July 16, and is free with park admission. All Celebración Latina activities will take place in the Carolina RFD section of the park. For more details, visit www3.paramountparks.com/carowinds/events/events.cfm. (Marta Ostrowski)


Taking cues from lead howler Jason McMaster's first band, Dangerous Toys, Broken Teeth is all about raw rock & roll and hair metal imbued with punk ethos. McMaster hasn't lost the requisite wail over the last couple decades. Will the good times never end? Fran Hammer and Strip City Sinners round out the bill tonight at the Milestone Club. Bring eight clams for the show that starts at 8pm. Details at www.themilestoneclub.com. (Shukla)

Ably combining the warmth of soul music and feisty hip-hop, Mary J. Blige went straight for the gold outta the gates with her debut in the early '90s. Even though she never shied away from commercial accessibility, Blige's urban sensibility and a knack for phrasing helped her from falling into the revolving door of bland, overproduced crap of many of her contemporaries. Blige was once hailed as the heir apparent of Aretha Franklin. After all these years, she still can't touch Ms. Franklin, but when at her best, Blige can reach the crescendo of classic soul and rap with minimal effort. Jaheim will warm up the crowd beginning at 7pm at the Verizon Wireless Amphitheater. Tickets are $49.50-$65.50. Further info at 704-522-6500. (Shukla)


So the press announcement hyped this as "two of the biggest Southern rock bands in the history of this country heading out on the road together ..." and we were thinking, cool, Tom Petty's headed back to town with the Allman Brothers Band possibly? Apparently not so much, instead the Lynyrd Skynyrd/3 Doors Down "Double Trouble Summer Tour" makes a stop at Verizon Wireless Amphitheatre tonight. OK, so we'll give them this much. It should have never taken seven nods to get Skynyrd into the Rock & Roll Hall of Fame. Those guys definitely deserve a spot in rock history, but the incarnation that is currently touring as the once-legendary greasy, blues-rock masters would be better off sticking to the "Lynyrd Skynyrd Tribute Tour" label they used in the late '80s. It's just not the same Skynyrd, period! And last we heard, those nice fellas from 3 Doors Down still employ a couple of our good, Charlotte-based friends, but musically they're about as unique as a 90 degree summer day down south. If you do plan on going, be sure to show up early and catch the opener Shooter Jennings, only child born to the late Waylon and Jessi Colter. He's the one who is actually doing some justice in keeping the Southern spirit in rock music alive today. Doors open at 5:30pm; music cranks up around 7pm. Tickets run $23.50-$65. Call 704-549-5555 for more info, or visit www.livenation.com. (Farris)