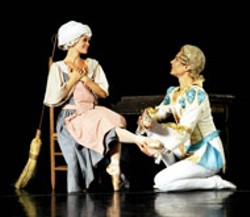 NC Dance Theatre will present Jean-Pierre Bonnefoux's ballet Cinderella for five performances beginning tonight in Belk Theater. One of the most elaborate productions the company has mounted, Cinderella includes music from Sergei Prokofiev, 20 DancePlace students and eight full-sized puppets. Showtimes are 7:30pm tonight, 8pm on Friday and Saturday and 2pm on Saturday and Sunday. Evening performances also include Dwight Rhoden's Verge, a piece that combines ballet, modern and jazz styles. Tickets range from $10 to $55. For more info, call 704-372-1000. (Wicker)

BareBones Theatre Group is currently presenting Marc Camoletti's farce Don't Dress for Dinner at the new SouthEnd Performing Arts Center on Rampart Street. Directed by Lon Bumgarner, the comedy involves lots of pratfalls and mistaken identities in the tradition of the classic farce. Showtimes are 8pm for all Thursday through Saturday shows plus there'll be a matinee on May 18 at 3pm. Tickets are $15. Call 704-332-5300. (Wicker)

Golfers tee off this morning at 7am for the first round of the inaugural Wachovia Championship at Quail Hollow Club. At press time, 143 players have committed to compete for the $5.6 million purse (one of the biggest of the PGA Tour), with more than $1 million going to the winner. This event is way sold out, but there will be four days of live coverage with rounds 1 and 2 (today and Friday) on USA Network and rounds 3 and 4 (Saturday and Sunday) on CBS Sports. Visit wachoviachampionship.com for details. (Herman)

Diana Son's comedy Stop Kiss opens tonight at Off-Tryon Theatre. Presented by Off-Tryon Theatre Company and directed here by Joanna Gerdy, the show was an off-Broadway hit. Shows are Thursday, Friday and Saturday at 8pm through May 24. Tickets are $15 per person. The Wednesday, May 14, show is "Pay What You Can Night." Call 704-375-2826. (Wicker)

Victory Pictures and Carolina Actors Studio Theatre (C.A.S.T.) will open their first production, Things You Need To Know Before The World Ends, tonight at the Central Avenue Playhouse. It's a dark, post apocalyptic comedy. Directors Michael R. Simmons and Chris Oneill are offering to perform free marriage ceremonies each night after the show. To showcase the new space, all 12 performances through May 24 will be free; reservations are strongly suggested due to limited seating. Curtain is at 8pm each night. Call 704-451-4155. (Wicker)

The Charlotte Film Society's Second Week/Second Chance series continues today at the Manor Theatre, as well as the following Friday, May 16, at Movies at Birkdale. This month's offerings are the Holocaust drama The Grey Zone, the indie hit Real Women Have Curves and the Korean import Take Care of My Cat. For details on prices and times, call 704-414-2355 or go online to http://charlottefilmsociety.com; for reviews, see this issue's Flicks section. (Brunson)

Deep Gap, NC's Arthel "Doc" Watson, a standout in the world of bluegrass, country, folk and blues for almost half a century, will play two shows tonight at Spirit Square's McGlohon Theatre, at 7 and 9pm. Doc will be joined by Richard Watson, his grandson, David Holt, Jack Lawrence, and special guests Ralph Stanley and the Clinch Mountain Boys. See our interview with Doc Watson elsewhere in this issue. Tickets for the event are $30-45, available by calling 704-372-1000. (Davis)

Isabel Zuber, author of Salt, will be at the Barnes & Noble in Pineville today at 2pm to read from and sign her book. Salt is a moving novel about a woman who gives up her dreams of art and travel to marry a successful landowner in early 20th century Appalachia. Call 704-341-9365 for more info. (Wicker)

The Charlotte Asian community will celebrate its heritage today with the 4th Annual Asian Festival, commemorating Asian Heritage Month. The festival offers food, fun and entertainment for all ages. Cultural activities include performances by Chinese Phoenix Arts and members of the Charlotte Symphony. For the first year, a beauty pageant will be held as contestants compete for the title of Miss Asian Festival. Celebrate the year of the ram at Marshall Park from 10am-5pm. Admission is free. 704-332-5656. (Herman)

A retrospective exhibit of the work of Raymon Elozua opens today at the Mint Museum of Craft + Design. Constructing Elozua: A Retrospective will showcase the work of Elozua's 30 year career as a ceramic artist as well as his interests in photography and sculptural landscapes and his more recent use of computer as a tool for photography and design. For more info, call the Mint at 704-337-2000 or go to www.mintmuseum.org. (Wicker)

If you are a meat eater, join rocker Ted Nugent today at Borders Books & Music at Morrocroft at 3pm. The Nuge and wife Shemane will be signing copies of their cookbook, Kill It & Grill It. Later, Nugent will join ZZ Top and Kenny Wayne Shepherd with Double Trouble at Verizon Wireless Amphitheatre for a show at 7pm. Tickets for the show are $20-$49.50. Call Ticketmaster, 704-522-6500. (Wicker)

It's Mother's Day. Do something nice for her - take her out to eat at least. After all, she is your mother!