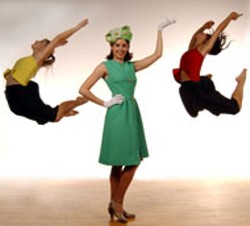 NOVEMBER 19 - WEDNESDAY
The dancehall legend has been doing his thing since the age of five and, at the age of eight, took first prize at the 1981 national Teeny Talent contest in Jamaica. Beenieman eventually hooked up with reggae legends Sly Dunbar (the Upsetters) & Robbie Shakespeare (the Aggrovators), both of whom were instrumental in guiding the young DJ toward Rastafarianism. His latest works find the Jamaican lyrical king working his magic on ragga, hip-hop, reggae, and dancehall jams. Of course, he's also produced the debut album by "actor" Steven Seagal, so it's not all wine -- or ganja -- and roses. With Tanto Metro and Devante @ Amos' SouthEnd. Advance tickets are $18, doors open at 9pm. Call 704-377-6874. (Schacht)

NOVEMBER 20 - THURSDAY
Comedienne Paula Poundstone is hilarious, intelligent and, umm, hilarious. And that's all you really need to know. The left-leaning Californian is one of the best stand-up comics working today, has her heart in the right place, and apparently can take a punch and keep coming back. See our story in the Arts section for more details. Poundstone will be at the Comedy Zone tonight and Sunday at 8pm, and Friday and Saturday at 8 and 10:15pm. Tickets are $20. Call 704-348-4242. (Grooms)

Colorado artist Laurie Dickson put together a gorgeous, creative book called Artists' Interiors: Creative Spaces, Inspired Living. Before you start thinking that we're plugging some high-end decor coffee-table cruncher, slow down. Dickson's book showcases more than just various artists' living spaces; she also delves into the artists' own personal interiors, giving examples of how they make their creativity work throughout different aspects of their lives. Two Charlotte area artists, Willie Little and Eric Anderson, are featured in Artists' Interiors. Laurie Dickson will be at the Noel Gallery at 5pm for signings. For more info, call 704-343-0050. (Grooms)

NOVEMBER 21 - FRIDAY
The Charlotte Checkers host the Greenville Grrrowl at 7:30pm tonight, a team they handily beat, 5-2, in Greenville on October 24 in the two teams' only previous regular-season meeting to date. The Checkers are running a promotion tonight: bring a canned food good and receive a free ticket to the team's March 10 game against the Louisianna IceGators. Tickets begin at $7 and run up to $20, and can be purchased at Cricket Arena. For more information call 704-335-3100. (Schacht)

NOVEMBER 22 - SATURDAY
If you thought that Charlotte had no more than a couple of contemporary dance companies, American Dance Art wants to expand your horizons at Booth Playhouse. "Urban Fleur," inspired by a Vogue magazine layout, revives one of the company's signature pieces choreographed by artistic director Sabrina Sandvi Berry. Next on the bill, company member Keesha Beckford's "On a Tear" is set to Dvorak's Serenades. Jumping into a more fun-filled mode -- and back to a 1940s setting -- the evening concludes with an exuberant "Judy Greengrass" by associate artistic director Heather Fox Obleada. Call 704-372-1000. (Tannenbaum)

The second annual Southern Exposure Film Forum will be held today and tomorrow in CPCC's Sloan Morgan Building and Monday at the Visulite Theatre. A wide variety of films will be screened from 12noon to 8pm this weekend, with select filmmakers in attendance for audience Q&A participation. Among the works are two local productions that recently won audience awards at the inaugural Asheville Film Festival, Emma's Gifts and Rewind. Judging will be juried, and a people's choice vote will also be taken. Then from 7pm to 11pm Monday (preceded by a cocktail reception at 6:30pm), the awards ceremony and screenings of the winning films will take place at the Visulite. Admission to the CPCC showings is free, although donations to the Charlotte Film & Video Association's scholarship fund will be accepted. Admission to the Visulite's awards ceremonies is $7 (free for CFVA members). For details, call 704-676-0868 or 980-722-8422, or go online to www.cfvonline.com. (Brunson)

The Kumbia Kings are one of the top Latin bands currently touring. Their music is largely their own brand of pop tunes, overflowing with the rhythms and sounds of Cumbia, salsa and even rap. The Grammy-nominated group has won numerous Tejano music awards as well as Billboard awards and are guaranteed to make you shake that thang. They're in concert tonight at 8pm at Cricket Arena, along with female pop artists La Conquista and Odaly's. Tickets are $35. Call Ticketmaster at 704-522-6500.

After trial runs in Davidson on Thursday and Matthews on Friday, Charlotte Symphony's Mostly Mozart series finally touches down in the Queen City. Glossing over the fact that the musicians' strike has left the abbreviated series with no Mozart this season, we're delighted that maestro Christof Perick is on hand, delighted that every Mostly program is being played at the acoustically friendly First Baptist Church, and overjoyed that the menu includes 20th Century music. Igniting with J.S. Bach's Orchestral Suite #3, the music-making zooms forward to 1916 and Franz Schreker's Chamber Symphony. Free parking and general admission seating. Call 704-972-2000. (Tannenbaum)

NOVEMBER 24 - MONDAY
The Davidson Wildcats host the UNC Tar Heels in their college hoops season opener at the Charlotte Coliseum (remember that joint?) tonight, tip-off at 7pm. The Tar Heels are expecting huge things from ex-Kansas Jayhawk coach Roy Williams, a perennial Final Four visitor and a former Tar Heel. The Wildcats, meanwhile, are hoping to improve on last year's No. 1 seed in the Southern Conference tournament. All tickets are $20 (pre-Ticketmaster). For more information, call (704) 357-4701 (Schacht)

A year ago, poetry slammers began shaking up American theatre as Russell Simmons Def Poetry made an audacious leap from HBO to Broadway. Now the Simmons jammers are taking it on the road - and bringing it to the Blumenthal. The entire Tony Award-winning design and technical team, with director Stan Lathan, is intact. Seven of the nine original Def poets come to Belk Theater for one night only. Black Ice and Poetri are in the house, y'all! You're behind the curve if you miss this moving, hilarious, in-your-face celebration of freedom, youth, and the spoken word. Call 704-372-1000. (Tannenbaum)