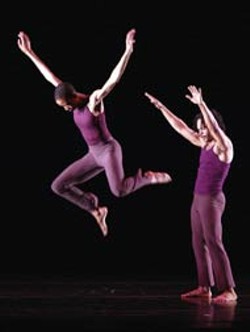 09 - WEDNESDAY
Actor's Theatre of Charlotte takes us back to the segregationist South of 1948 for A Lesson Before Dying, Romulus Linney's adaptation of Ernest J. Gaines's award-winning novel. Our protagonist is Jefferson, sentenced to die for a crime he didn't commit. Now he's devolving into animality under the stress of facing death and the humiliation of being processed by a prejudicial justice system. Jefferson's godmother wants him to die with dignity and uphold the honor of his people. So she recruits a local schoolteacher, Grant Wiggins, to prepare Jefferson for his martyrdom. But is Grant up to the task? Sidney Horton directs the touching drama, playing at 650 E. Stonewall Street through February 26. Nicholas Johnson stars as Jefferson, with Terrell Dulin as his reluctant mentor. Feb. 9-26, Wed-Thu, 7:30pm; Fri-Sat, 8pm; Feb. 20, 2:30pm. Tickets are $17-$22 with a pay-what-you-can performance scheduled on February 15. Call 704-342-2251. (Tannenbaum)

If you like your music with an improvisational twist, then this Jazz Improv Night at The Room is an absolute must. The night features the Dragons 1976, a musically well-connected trio out of the fertile Chicago scene, two members (Joey Stephens and Ben Best) of local experimental rockers Pyramid, and the Hundred Dollar Orchestra, a big band made up of a dozen local and regional musicians led tonight by Brent Bagwell, reeds man in the jazz trio Eastern Seaboard. The groups hit the stage at 10pm, and only $7 gets you in. For more information go to www.theroom.tv. (Schacht)

In a land of plenty, it's not difficult for African Americans caught up in their struggles toward upward mobility to forget their African roots — and the more momentous struggles of their ancestors. All kinds of SOS signals are broadcast, with a satirical edge, from the dysfunctional black family in Kirsten Greenridge's Sans-Culottes in the Promised Land. Plucked by director Michael Simmons from the Humana New Play Festival in celebration of Black History Month, the heavily charged comedy plays at C.A.S.T. (1118 Clement Ave.) through February 26. Obsessed by the almighty dollar, our wacko materialists threaten to strip their Caribbean voodoo nanny of her spirituality before she can save them from themselves. Feb. 9-12, Feb. 17-19, Feb. 24-26, 8pm. Tickets for the battle, featuring a black daughter convinced she's Snow White, are $15, or $12 for students and seniors. Call 704-455-8542. (Tannenbaum)

10 - THURSDAY
Emerging triumphant from last month's jousts with the Classical Clown, Charlotte Symphony Orchestra's resident conductor, Alan Yamamoto, quests onward with a series of Neighborhood Concerts. All feature Mozart's Horn Concerto #3 with CSO principal Frank Portone handling the heraldry. The program is handsomely filled out with Symphony premieres of Chen Yi's Shuo for String Orchestra and Haydn's Symphony #90. Tonight's concert is in University City at St. Thomas Aquinas Church, tomorrow the musical crusade ventures down to Westminster Presbyterian in Rock Hill, and Saturday the deeds of derring-do arrive downtown at First Baptist. All at 8pm. Tickets for these general admission concerts are attractively priced at $15, just $5 for students. Call 704-972-2000. (Tannenbaum)

11 - FRIDAY
In the wake of the South Asian tsunami disaster, the latest IMAX film to debut in Discovery Place's IMAX Dome Theatre seems more than appropriate, not to mention sobering. Forces of Nature takes a look at natural occurrences that threaten the fragility of the planet, from volcanoes to earthquakes to tornados. The film follows various scientists as they examine lava flows in the Caribbean, fault lines in Istanbul, and funnel clouds in the American Midwest. Forces of Nature begins its local run today; for showtimes and prices, call 704-372-6261, or go online to www.discoveryplace.org. (Brunson)

Friends and Lovers, a new stage play based on Eric Jerome Dickey's best selling novel, comes to Ovens Auditorium today and tomorrow. The star-studded cast includes Leon (Waiting to Exhale, The Five Heartbeats), Monica Calhoun (The Best Man, The Players Club), Miguel A. Nunez, Jr. (Juwanna Mann), Mel Jackson (Soul Food, Deliver Us from Eva), and Lavell Crawford (ComicView). Performances are at 8pm on Friday and Saturday, plus a 3:30 matinee on Saturday. Ticket prices vary by performance. For information and tickets, go to www.ovensauditorium.com or www.ticketmaster.com. (Vespa)

12 - SATURDAY
If your adrenaline doesn't start pumping to the news that the Garth Fagan Dance Company is coming to Belk Theater, it's probably because you don't realize that Fagan won his Tony Award for his choreographic exploits in The Lion King. 'Nuff said? Fagan's work is firmly grounded in the speed and precision of ballet technique. He layers on the torso-centered movement and energy of Afro-Caribbean dance and sets it all ablaze with rule-breaking spontaneous combustion of post-modernism. Jazz, classical, and reggae are all in the musical mix as Fagan's gravity-defying troupe invades the PAC for one night only, at 8pm. Tickets are $12-$40. Call 704-372-1000. (Tannenbaum)