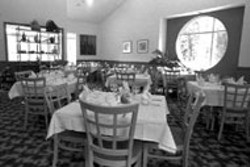 When Dr. Jane Goodall came to Charlotte a few weeks ago for the opening of her film Jane Goodall's Wild Chimpanzees at Discovery Place, Chef Geoff Bragg was asked to cook for a private event in her honor. The choice of Bragg is not surprising given the fact that Goodall is a vegetarian, and Bragg, a Johnson & Wales culinary graduate who had worked at the Pewter Rose, is now the chef of the vegetarian restaurant within the recently relocated The Peaceful Dragon Cultural Center.When the Peaceful Dragon opened in 1997 in a strip shopping center in Pineville, it featured a holistic approach to a vegetarian lifestyle by offering vegetarian dishes, teas, and classes in the martial arts, T'ai Chi, and meditation. Before it opened, Charlotte had suffered a dearth of vegetarian restaurants. The early 1980s brought They Laughed at Edison, which was short-lived. In the late 80s John Berres opened Cafe Flavors, which was not a vegetarian restaurant, but employed the image of a cow with a slash through it to indicate vegetarian choices on the menu. Today only a handful of vegetarian restaurants exist in the area.

The Peaceful Dragon moved to a tract of land in southwest Charlotte. "What inspired the move," said owner Eric Sbarge, "was our lease was up and either we had to renew it or do something else. We decided that for not much extra expense we'd have six acres. We doubled the building size. In the long run we plan to develop organic gardens on our property. The location may be further out of the way for some people, but in return, this setting is a mini escape, a place for people to come and enjoy."

When the hostess seated us, she gushed, "You know we are a vegetarian restaurant." Later when I asked Chef Bragg about this, he laughed and said, "We had to start having the hostess inform our diners because some people did not realize we were vegetarian and would get almost offended. Some think since we are an Asian restaurant we should have a buffet.

"Our biggest challenge is getting the word out that we serve strictly vegetarian. Our menu is 100 percent vegan except the mayo in the chickpea spread, which has egg, which we use on the veggie burger served during the lunch hours. Some dessert items are not vegan, but our molten chocolate cake is. I will always come out to a table to talk to people who have concerns about the ingredients. There are people who are vegetarian for health reasons."

Added Sbarge, "Our cuisine is Asian in flavor and purely vegetarian. We try to let the flavor of the product come through. We use organic foods when possible, low salt whenever possible, and nothing is greasy. You don't have to be a vegetarian to eat here, in fact probably the vast majority of our customers are not vegetarian. None of us here are fanatic vegetarians. For my wife it was a religious choice. For me, I became vegetarian at 18 because I felt better eating vegetarian."

The main dining room is tranquil, spacious, and light. A corner fireplace waits for colder weather. The brief beer and wine list is a mix of American and international choices and wines by the glass are offered as well. The longer hot tea list is fully descriptive. The menu offerings are extremely fresh and a mix of Asian: dumplings, stir fry, curries, noodles, and such. Some vegetarians and vegans may take offense at the use of such captions as "chicken" skewer bowl, even though the description of the dish lists the skewers as seitan, a wheat protein product frequently used as a meat substitute. But perhaps this is meant to be informative for non-vegetarians. In any case, Chef Bragg prepares pretty plates that are good for you and demonstrates his talent by melding nutritious virtue with culinary cleverness.

We began with a parade of starters. A crunch of a bright spring roll unlocks a blast of crunchy carrots and cucumbers, herbs, and mellow rice noodles. Deftly scented steamed dumplings bespeak the confidence of Bragg's kitchen. Organic greens, shredded vegetables, pumpkin and almonds work together with a smack of tahini dressing to form a flavor-infused arrangement. Our table's favorite, though, was the scintillating scallion cake with its accompanying ginger dipping sauce.

After a round of appetizers, do not forsake the other side of the menu. The north Indian yellow curry is a mix of chickpeas and potatoes while the Vietnamese Bahn Xiao crepe is undeniably delicious. Desserts are a real treat. The vegan Molten chocolate cake did not overcome the challenge of moistness, but the non-vegan pumpkin was sensational.

The Sunday brunch menu lets loose a bit with some Italian and French items as Bragg plays with the challenges of a vegetarian restaurant.

One of the dilemmas of a vegetarian restaurant is the food is the draw. That may seem strange, but in today's world of selling a restaurant's image or ambience or cache, I find a restaurant all about food charming. Time will pass before Charlotte has enough restaurants to justify the kind of vegetarian restaurant guide so popular on the left coast, but if such a guide existed here, the dining room in the Peaceful Dragon would be at the head of the list.

Carolina Beer Company of Mooresville has released a bottle batch of its seasonal spice beer, Cottonwood Pumpkin Ale, a medium bodied lightly spiced amber ale first developed in 1997. Sounds weird, so it must be good, right?

Do you have a restaurant tip, compliment, complaint? Do you know of a restaurant which has opened, closed, or should be reviewed? Does your restaurant or shop have news, menu changes, new additions to staff or building, upcoming cuisine or wine events? You can fax this information, at least 12 days in advance of event date, to Tidbits: 704-944-3605, or leave voice mail: 704-522-8334, ext. 136.