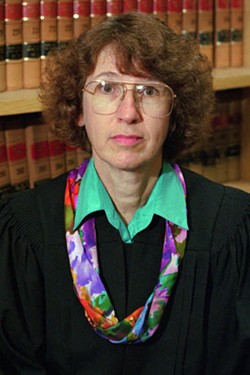 How one savvy businessman got out of paying child support

Duane Bennett wasn't one of those people who had wealth handed to him. With only a high school GED and no college education, he managed to amass $1.5 million in real estate by his late 20s. By his 40s he was running a million-dollar business and knocking down $500,000 a year.

Then he met Jane. Wealthy men looking to unload their wives and children cheaply don't seem to fare well in Judge Jane Harper's courtroom, as Ric Flair learned recently when Harper awarded the wrestler's wife $20,000 per month in alimony after the judge decried their lavish lifestyle.

Bennett's wife Sharon, mother of his four children, brought little more than some furniture to their 14-year marriage, and her husband had given her most of that, his lawyers noted.

Since Sharon had signed a prenuptial agreement that would leave her with essentially nothing, Duane probably figured he was in the clear when they divorced in 2001. Harper had other ideas.

The judge started by nullifying the couple's prenup and freezing more than $1 million dollars worth of their assets for later distribution. Duane tried in vain to convince Harper that he didn't really make $500,000 a year, but she didn't buy that either.

"The plaintiff has gained in revenue at least $500,000 a year for the past three years and the court further finds his testimony as to expenses was not convincing," Harper wrote.

She ordered him to pay $4,200 a month in child support, the full cost of health insurance for the children and $12,000 in attorney's fees Sharon had accrued fighting him in court.

At that point, most men grit their teeth and cry to their girlfriends. But Duane was a man of action. If Harper couldn't be reasoned with, she'd have to go. So in February 2002, according to a memo written by Harper, Duane called up Mecklenburg County Democratic Party Chairman John Cotham and offered the party a $50,000 bribe if it could get Harper, a registered Democrat whose election campaigns the party had supported, off his case. He wanted to reduce his child support from $4,200 to $1,000.

Cotham reported the bribery attempt to District Attorney Peter Gilchrist, who is also a Democrat, and Gilchrist then called Harper to inform her about it, according to a memo Harper wrote about the incident.

At this point, most people would probably assume Duane Bennett was flat busted and would be facing jail time. Instead, the attempted bribery turned out to be a stroke of genius.

When Harper learned about it, she immediately recused herself from the case.

"This information, provided to me out of court, would affect my thinking about this case in the future," Harper wrote in a memo to the attorneys of both parties.

Duane's attorney, Jonathan Feit, says his client has no comment.

Though business stories from the period tout the growing success and revenues of Duane Bennett's company, Xenicent, Inc., he told Lisa Bell, the new judge in his case, that he was unemployed and making only $6,000 a month. Bell knocked his child support down to $1,427 a month plus the children's health insurance.

By the end of 2003, Bennett was claiming to be making only $2,500 a month. Sharon claimed in court documents that he was enjoying a "luxurious lifestyle," including a three-week European vacation, while he owed her $16,000 in child support.

In 2004, Judge Nathanial Proctor dismissed Sharon's motion of contempt for Duane's alleged failure to pay child support and knocked his monthly child support payment down to $1,000.

Creative Loafing couldn't find any evidence that Duane Bennett actually paid anyone a bribe, but attempting to bribe a public official or someone elected to office is illegal in North Carolina. The problem, as is so often the case in politics, is the definition of "public official."

Gilchrist says that while he found Bennett's offer "reprehensible," he couldn't prosecute because technically Bennett didn't break the law.

"I think to be a public official you probably need to hold an office that is part of government and the political parties are not part of government," said Lawrence. "Normally we would not impose the kinds of requirements on the two parties that we would impose on a public entity." (Translation: Duane just pulled one over on the court system and got away with it.)

Stunts like this are more common than you would think, says Eileen King, the regional director of Justice for Children, a Washington-based group that helps parents fight custody battles. She's seen desperate parents go to extreme measures to keep their kids or to get out of paying child support. Parents, in particular those with money, often succeed in getting a tough judge -- or a fair one, depending on your perspective -- removed from their case. In one case in New York, a man ran political TV ads trashing a judge, King said. Like Harper, the judge eventually recused himself from the case.

What disturbs King the most about the Bennett case is that Harper ordered that the memo she wrote describing the bribery attempt could not be included in the family's court documents. She did this so the new judge in the case wouldn't be prejudiced by it. In today's custody battles, parents are often subjected to multiple psychological tests designed to find the slightest flaw in their personalities and parenting skills, King says. They pay attorneys to defend them against the latest accusations of their ex.

In the Bennetts' case, those accusations have been plentiful. He claimed she was a crackhead. She claims he stole her car and that he forced the children to chop the heads off chickens. He allegedly enlisted the children to take down the license plate numbers of her jewelry customers, who he alleged paid her in cash so she could hide her income.

"I would think the bribery attempt would be information that the judge should know about because it goes to the father's intent not to take care of his kids, but to actually undermine the system," says King. "I'm not quite sure why the judge recused herself."

Harper sees things differently. She asked CL not to do this article because it could cause all 17 judges eligible to hear the case to recuse themselves if they knew about the bribery attempt she described in her memo. Then the family wouldn't be able to have their ongoing custody and child support skirmishes heard in court in this county, she said.

Whatever the case, the Bennetts appear to be doing fine for the moment. Though she was so broke she had her gas and water turned off at one point, Sharon was eventually awarded $125,000 of the money Harper froze and 20 percent of the stock in Duane's company. According to the case file, the kids are doing well in school and seem happy in both parents' homes.