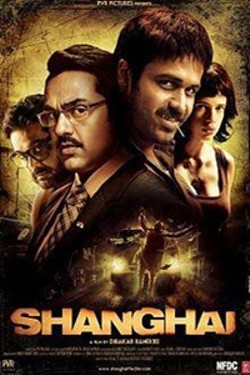 In a bustling Indian city gearing up for the latest celebrated political elections, four individuals find themselves tied up into a gruesome game of crime and politics. A young activist encounters a shocking and disturbing road accident which leaves a prominent political figure in critical condition. A lone girl on the street believes it to be a murder. A porn film maker claims to have documented proof that will bring the government down. A high-ranking bureaucrat is brought in by the government for damage control. As days go by, those involved discover a hidden secret in the governments sector: a vision of a new metropolis, a pipe dream, a dream called "Shanghai".

Shanghai is not showing in any theaters in the area.