Only proven solution to homelessness struggles to get rooted in Charlotte 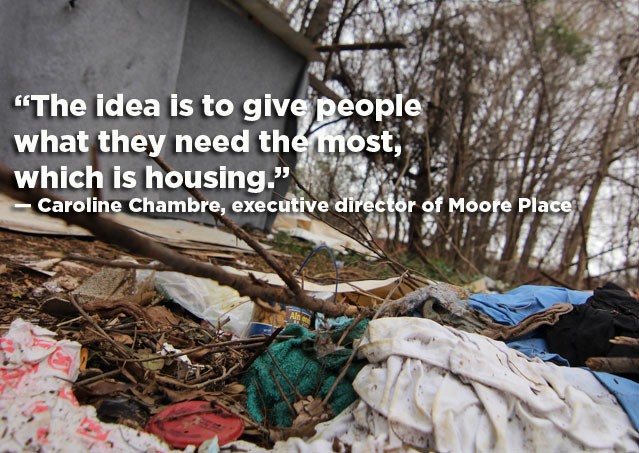 On a recent chilly morning, Bernard Hernandez sits in front of the shack he built with wood boards and plastic tarp, listening to a battery-operated radio. Inside, a hanging tarp divides a 15-by-15 foot area, half of which is for Hernandez, the other for his roommate, Jorge. Bags of food, tools, multiple bicycles and other items clutter the living area, and several blankets cover the beds. A barely audible Pink song plays as Hernandez smokes a cigarette and talks about how much his life has improved in the past year.

The 53-year-old Cuban-born American has been struggling with homelessness since getting out of prison in the early '90s. After two years of fights and falling victim to theft at the Men's Shelter, the largest temporary facility in Charlotte, he decided in July 2012 to build a shack on some abandoned railroad tracks on the east side of town. He gets by on money he makes from odd jobs at a local church, but hopes to find consistent income during the summer so he can afford his own place. His living area isn't ideal, he said, but it's better than what he used to rely on.

In 2006, the city and county published "More than Shelter!: The 10-Year Plan To End and Prevent Homelessness." The 43-page document offered suggestions to curb or end chronic homelessness. Advocates had said for years before the plan that because of a lack of permanent housing options in Charlotte, temporary shelters unfairly carried the burden of housing the chronically homeless. Consequently, shelters suffer from unsanitary and unsafe conditions.

The plan — filled with many alternatives, including permanent housing — was supposed to help. But it took until this year for major suggestions to be implemented.

In March, the Housing and Neighborhood Development Committee proposed to invest $12 million to develop what advocates call "permanent supportive housing" complexes for the chronically homeless over eight years. Studies and advocates of the homeless champion such housing, which provides a portion of rent, social workers and medical support, as the only practical way to curb — and possibly end — homelessness. But this kind of housing is not without controversy. To neighborhood associations, particularly representatives of historic areas that require a board's approval for even small home renovations, such housing complexes are eyesores that pose potential safety issues.

SAM ANTHONY, 51, lived in the Men's Shelter for two and a half years before being given tenancy at McCreesh Place, which looks and acts like an apartment complex — tenants sign leases and have keys to their own places — but with a few additions: social workers and medical personnel are on staff.

McCreesh Place opened in 2003, partly as a result of another study, "Out of the Shadows," from 2002. Similar to "More Than Shelter," its aim was to reduce the impact of homelessness in Charlotte. No other permanent affordable housing was built for years after McCreesh, however, and homeless numbers continued to rise in the city through 2010.

Anthony opted out of the lease with McCreesh and now lives at Moore Place. 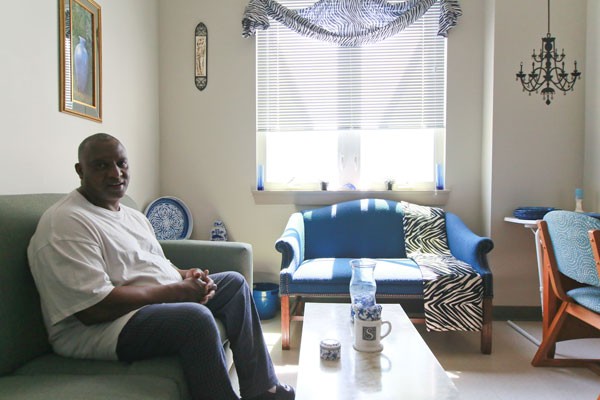 He is proud of his apartment. He enjoys the flat screen television and sofa in the living room, which came furnished, but he's also quick to point out a new chair that he bought and moved in himself. He doesn't need to bring attention to the chicken and peppers stewing on the oven — the aroma of Southern cooking is undeniable.

"I'm just trying to do the best I can to keep this place," Anthony said.

Moore Place came to fruition in 2011 and opened its doors early the following year after advocates grew tired of waiting for the city to implement more plans from the 2006 report. Once the founders designed the permanent housing structure, they went to the city, county and Charlotte Housing Authority, a government entity that connects people with affordable housing, for financial support. As a result, the three public entities subsidize 70 percent of Moore and McCreesh's rent, and the rest comes from tenants, of which there are about 180 total.

"It took an entity outside of government to say, 'We have to do something that actually speaks to [the 'More than Shelter' report],'" said Caroline Chambre, executive director at Moore Place. "[Homeless individuals] don't get stuck [in temporary shelters] because the staff is doing a bad job of getting them out of there; they get stuck because there's nowhere for them to go."

Moore operates much like McCreesh, but with a few differences. While McCreesh houses men only and has guidelines for those wanting residency, including mandatory sobriety, Moore Place is open to men and women and runs under a "housing-first model," which has rules but none relating to sobriety.

"We don't say you have to be clean and sober," Chambre said. "You don't have to be stable on your meds to move in. It is very much a come-as-you-are philosophy, and we meet you where you're at. The idea is to give people what they need the most, which is housing."

Many members of the homeless advocacy community believe, and have witnessed in other cities, that permanent supportive housing, especially through a housing-first model, is the most effective way to curb or end homelessness. But they've also run into the problems permanent housing complexes across the country have faced. When the founders of McCreesh Place pitched building a separate permanent-supportive housing complex in Elizabeth to the city in 2011, neighborhood associations strongly opposed it. Their outcry, together with a lack of long-term funding from the city, stopped it from being built.

HUNDREDS OF ELIZABETH residents attended meetings last year to discuss the proposed permanent-housing community, which would have taken over an old nursing home. Some voiced concerns about its proposed location next to an elementary school. After the meetings, members of the Elizabeth Community Association received a letter from Supportive Housing Communities, which operates McCreesh Place, and The Affordable Housing Group, stating that the project was being scrapped due to financial concerns.

"Elizabeth is still open to the affordable-housing conversation," said Beth Haenni, president of the Elizabeth Community Association. "As with any other development coming into our neighborhood, it has to be a good fit in terms of appropriate location and scale." Haenni pointed out that the association is donating the proceeds of this year's Elizabeth Home & Garden Tour to Elizabeth House, a newly opened transitional shelter for homeless families.

When McCreesh Place was built about a decade ago, there was strong push-back from residents in the surrounding NoDa and Villa Heights neighborhoods. They were concerned about transience, panhandling and other issues they believed came with housing the homeless. After a series of community meetings, McCreesh Place was finally built.

"Now you can go to our neighbors and they will happily provide a reference for us about what good neighbors we are," said Pamela Jefsen, McCreesh's executive director. "It's hard to make the case for permanent supportive housing bringing down neighborhoods."

Chambre ran into the same trepidation from the Druid Hills neighborhood, next to Moore Place, but since its construction has heard few complaints at community meetings. Druid Hills Neighborhood Association President Darryl Gaston said he was initially miffed that no one from Moore Place had contacted him or his group about construction plans.

"The Druid Hills Neighborhood Association is visible, vital and valuable to the north end quarter, and I just could not understand how a project of this nature was going to take place in my community without the neighborhood organization having been engaged in some type of dialogue," Gaston said. "They did not need our permission to establish this facility ... and personally, I was not against the facility. I have a pastor's heart. However, I was just concerned at the lack of respect, or no respect at all, about sharing with us information about this proposed project." 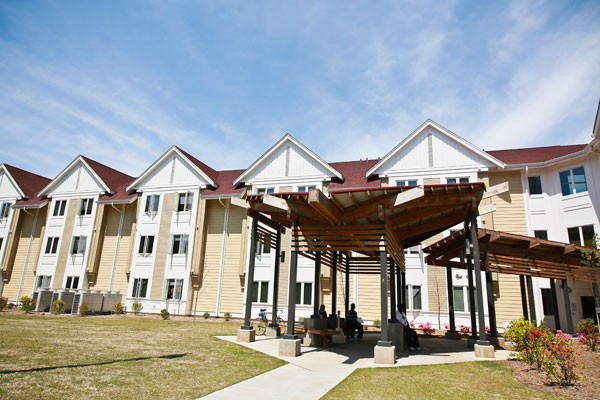 He said some within the association were against Moore Place, which they thought would bring more crime to the neighborhood. Some residents were panhandling soon after it was built, but it was nothing conversations with Moore Place staffers couldn't fix. Gaston said he now considers the housing complex a part of the community.

"After Moore Place has been established, it's a positive thing," he said.

To avoid complicated bureaucracy and neighborhood associations altogether, Chambre runs a "scatter-site" program within Moore Place, which connects with landlords across the city to use empty residential units in apartment complexes as permanent supportive housing.

The benefits of places like Moore and McCreesh extend beyond providing homeless individuals dignity and security. In 2012, the Urban Ministry Center, a homeless resource center, conducted a study using 75 Moore Place tenants that examined the cost of their utilization of hospitals and jails during the two years prior to their move into Moore Place. In those two years, the tenants racked a $5.9 million bill — about $39,500 per tenant, per year — most of which came from trips to the emergency room, often a homeless person's only source of medical treatment. In contrast, Moore Place can house a chronically homeless person and provide them amenities for about $14,000 a year.

The benefits helped one of Charlotte's most well-known homeless citizens, Larry "Chilly Willy" Major, who moved into Moore Place for eight months before he was struck and killed by a car in October 2012. Major was in and out of the ER before he found permanent housing at Moore Place, where on-site nurses monitor vitals and perform routine check-ups. A primary care physician also visits once a week.

MAYOR ANTHONY FOXX's new budget proposal, which he'll try to push through City Council in June, would fund construction of even more permanent housing — about 680 units.

While curbing homelessness has been a priority during his term, the mayor said the economy and, most recently, state legislation are working against him. Foxx worries that a recently passed state law that cuts weekly unemployment benefits and caps the time one can receive those benefits will only worsen homelessness in Charlotte and around the state.

"There's a whole new group of people vulnerable to homelessness now and [the city is] their last backstop," said Foxx.

For many in that new group, the first stop will be the Men's Shelter.

Executive Director Carson Dean is on board with permanent housing and returning the temporary shelter he runs to just that: a temporary, emergency-only alternative. He's spent the past three years getting people out of the Men's Shelter by finding them more permanent living situations. He tries to put willing men through a process that includes finding steady income and permanent housing and building a support network that includes drug counseling and job training. Men's Shelter staffers frequently connect occupants with assisted living or boarding houses and encourage them to reconnect with nearby family or seek out their own housing.

Of the 3,000 men who visited the shelter in the past year, about 350 have found permanent housing.

"At the end of the day, whether it's our agency or another agency, that's how we solve homelessness," Dean said. "That gets us back to not being a place where people take up residence, but where we provide an intervention and get them back into the community."