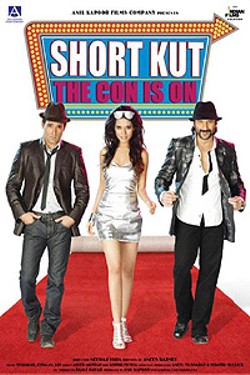 "Shortkut" is a young and heart-warming slice-of-life comedy about the trials and tribulations of the two con artists as they face some truly zany situations in the pursuit of their tinsel town dreams. Set in the thick of the buzzing Bollywood industry, the film is about two strugglers, Chandu and Shekhar, one who makes it big as a superstar after stealing a movie script, and the other, whose struggle as a director continues after his script gets stolen! Destiny again brings the two face to face when Shekhar is set to direct his first film with Chandu. A fight of egos ensues, and what happens next as the real-life drama of the reel unfolds, is the crux of the plot.