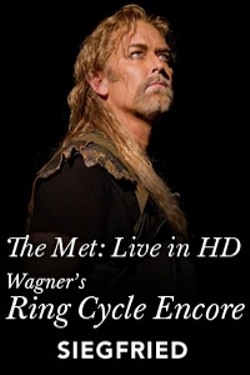 An encore performance of Wagner's Siegfried will be shown in select theatres on Wednesday, May 16, 2012, at 6:30 PM in all time zones. Part three of the Ring follows the journey of Siegfried, son of Siegmund and Sieglinde, from naive fearless boy to supreme hero. With the re-forged sword of his father, he conquers magical obstacles to reach his prize, Brünnhilde. Jay Hunter Morris took over the title role, one of the most demanding in the repertoire, days before the production's premiere and reprised his acclaimed portrayal in this live transmission the following week. Deborah Voigt is Brünnhilde and Bryn Terfel sings the Wanderer.

Siegfried: Met Opera Ring Cycle Encore is not showing in any theaters in the area.