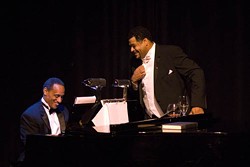 By any conventional reckoning, the biography of Paul Robeson is the story of five or six extraordinary black men. As the current On Q/Opera Carolina production reminds us, Paul Robeson was a Phi Beta Kappa scholar and valedictorian at Rutgers University, a first-team All-American football player in 1917 and 1918, a Shakespearean actor and Hollywood star who played Othello on Broadway, and the bass-baritone inspiration for Joe in Jerome Kern's Show Boat.

All of these formidable achievements have been nearly obliterated by one last thread that runs through Robeson's life — his fiery activism. For Robeson was also a peace-loving, world traveling troubadour who found more racial harmony and acceptance in 1934 Soviet Russia than in his native New Jersey. As a man who personally confronted prejudice on the Rutgers campus, on the gridiron, at Columbia Law School, and during a brief law career — he quit a prestigious law firm when a secretary refused to take dictation from a black man — Robeson was certainly qualified to make the comparison.

The State Department revoked Robeson's passport in 1950, and his standing with J. Edgar Hoover's FBI certainly wasn't redeemed when the Soviet Union awarded him the International Stalin Prize in 1952. Robeson's nadir came in 1956 when he was called to testify in front of the House Committee on Un-American Activities after refusing to sign an affidavit saying that he was not a Communist. After affirming the legality of the Communist Party and taking the Fifth Amendment, Robeson was shunned by Broadway, Hollywood, and the civil rights movement.

While Phillip Hayes Dean's script sidesteps Robeson's pro-Stalin sentiments, it's shocking enough to hear him declaring the vaunted Harlem Renaissance a sham — because W.C. Handy couldn't hear his own music at the Cotton Club. Little else, to paraphrase Othello, is extenuated in a show that runs 133 minutes plus intermission and manages to give a rich sense of Robeson's manifold gifts and achievements.

It takes a fairly mighty pair of performers to pull it off as Robeson and his longtime arranger and accompanist, Lawrence Brown. As the demigod Robeson, you need to be able to deliver Othello's dying monologue and sing the money notes at both the bass and treble ends of "Ol' Man River." You also need the humor and flexibility to portray assorted extra characters that Robeson mentions in his narrative. Just to be greedy about it, you need to possess the imposing physicality of the All-American athlete and the tempestuous Moor.

Jason S. McKinney has it all in a phenomenal Charlotte debut, his robust unmiked voice reducing Duke Energy Theatre to the size of a closet as it resounds through a songlist that includes blues, folk songs, and Negro spirituals besides the Kern classic. Quentin Talley directs the show with admirable artfulness, deploying McKinney to all corners of the stage and around the piano, while sound designer Mania Rosen has the luxury of including actual Robeson recordings in his soundscape. The likeness of the two voices is that close, nor are we confronted with the stiffness that often afflicts opera singers called upon to act. Dressed in black tie and tails for this concert setting, a regal aura of dignity crowns this Robeson.

But let's not underestimate the pliancy of Ron Taylor in his supporting role. At the keyboard, Taylor noodles away at a hodgepodge that ranges from Mozart and Chopin to "Swing Low, Sweet Chariot," and he sings the tenor part in a "Nobody Knows You When You're Down and Out" duet with McKinney in the Harlem segment. Most impressively, he steps away from the keyboard and takes on the role of Grand Inquisitor when Robeson's career hits the rocks during the height of 1950s anti-Commie hysteria.

Bravos all around, especially for a Friday performance that turned out to be a first-night preview. It will be even more powerful on opening night this Thursday. C