Song and Dance | Reviews | Creative Loafing Charlotte
Switch to the mobile version of this page. 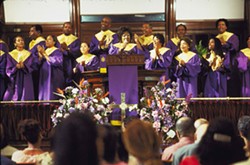 Preaching to the Choir is a small movie with big emotions. One of its earliest scenes introduces the church choir that will figure in the story's action, and it's imperative that audience members immediately feel the passion and commitment emanating from this outfit. Since the lead singer of this choral group is played by no less than Patti LaBelle, that goal's pretty much accomplished from the get-go.

LaBelle's appearance is little more than a tasty morsel of a cameo, yet what follows is no less diverting. Preaching to the Choir, directed by York, SC, native Charles Randolph-Wright, receives this month's Truth In Advertising Award: There's not much on tap that's particularly surprising, meaning that this may have trouble luring anyone besides the faithful (read: target audience) into the fold. Yet the lack of pretension, the exuberant musical numbers and particularly the conviction of the actors easily overcome some narrative rough spots to transform this into an agreeable picture for moviegoers of all persuasions.

In one way, this film recalls vintage-era Warner Bros., specifically the 1938 melodrama Angels With Dirty Faces. In that one, fate decreed that one kid would grow up to become a priest while his pal would grow up to become a thug. Preaching likewise kicks off with two young lads standing on the brink of their destinies -- in this case, brothers coping with the death of their mother in 1988 South Carolina. Now orphaned (their father died shortly before their mom), Te and Wes move to Harlem to live with kindly but stern Aunt June (Novella Nelson). Once they reach adulthood, Te (now played by Billoah Greene) moves to Hollywood and finds success as a hard-core rapper named Zulu while Wes (Darien Sills-Evans) remains in Harlem and becomes the neighborhood church's minister.

Te hasn't communicated with his family in over a year, but after he runs afoul of his brutish record producer, Bull Sharkey (Adewale Akinnuoye-Agbaje), he decides to head back home and lay low for a spell. His arrival immediately affects the members of this staid community: A pretty churchgoer (Janine Green) finds herself attracted to him, the struggling church choir recognizes that it might benefit from his musical expertise and Wes grows resentful over his mere presence. Meanwhile, Bull Sharkey searches high and low for his wayward music star, locating him just as Te is helping the chorus prepare for -- but of course! -- a major competition between gospel choirs.

If Preaching to the Choir has a more direct screen antecedent than a Cagney gangster flick, it's 2003's The Fighting Temptations, in which city slicker Cuba Gooding Jr. returns to his small Georgia hometown and ends up leading a church choir in a gospel competition. The musical interludes in Temptations were knock-the-roof-off terrific, but Preaching emerges as the better film because, unlike the earlier work, it takes the extra step of allowing its characters to break free from formula. Wes isn't the unblemished man of God we might expect but rather a troubled minister whose foibles (particularly those stemming from his relationship with his brother) allow him to emerge as recognizably human. And Te in his Zulu-rapper stance isn't introduced as a venal lout who then experiences a ludicrous, lightning-quick transformation into a decent guy; instead, it's clear from the start that Te has always been too sensitive to fully inhabit the hard-core gangsta lifestyle, meaning his posturing really is only surface-deep.

As Wes, Sills-Evans displays some of the fiery intensity of Denzel Washington -- as the minister delivers an impassioned lecture, we almost expect to hear the words, "We didn't land on Plymouth Rock; Plymouth Rock landed on us!" coming out of his mouth -- while Greene exhibits an easygoing demeanor that makes it easy to warm up to his character. Both actors are as likable as everything else in this dulcet entertainment.

Like a vampire scurrying to avoid the rising sun, an unfortunate number of filmgoers still insist on steering clear of documentaries, which even in this era of Michael Moore and penguins are often presumed to be dry-as-desert-sand. Fortunately for these audience members, Hollywood is always willing to water down the formula by offering fictionalized versions of true-life tales.

Therefore, viewers not interested in the superb nonfiction feature Spellbound have their choice of Bee Season (released on DVD last week) or the upcoming Akeelah & the Bee. Similarly, if watching the enjoyable doc Mad Hot Ballroom sounds too much like work, there's always the new theatrical release Take the Lead.

Fortunately, because Tinseltown has always been partial to underdog stories, its inspirational sagas are often told with a certain amount of panache and a flair for button-pushing melodramatics that will entertain as many moviegoers as it irks. Take the Lead might be a tad too predictable to fully satisfy my palate, but it's just the sort of uplifting yarn that could conceivably generate enough positive word-of-mouth to emerge as a modest sleeper hit.

Inspired by a true story (and rarely has that opening disclaimer been used so loosely), this centers on the efforts of ballroom dance instructor Pierre Dulaine (Antonio Banderas) to teach his elegant craft to a high school class of rowdy inner-city youths. Initially resistant to his efforts, the kids eventually come around once Pierre agrees to mesh his moves with their hip-hop music.

The issue of whether the best way to reach troubled kids is by diluting what they should learn with components of what they like is an interesting one -- in this case, should the music of Nat King Cole and George and Ira Gershwin be allowed to stand on its own regardless of the consequences, or is American history being pushed further to the back of the bus by burying the tunes under electronic beats? It would take a more courageous movie than this one to even attempt to answer that, but for its part, Take the Lead allows both sides to weigh in on the argument.

The climactic ballroom dance competition (surely you didn't expect this to end any other way?) is clumsily presented, and I could have done without the heavy-handed "villains" of the piece: a blonde high-society dancer who talks down to the inner-city kids and a busybody teacher who all but foams at the mouth as he rails against Pierre and his teaching methods. Still, Banderas and his young co-stars are attractive and appealing, and the subplots involving the students' troubled home lives carry more currency than one might expect. Take the Lead takes viewers on a straightforward journey, but there are some pleasant sights and sounds along the way.

PREACHING TO THE CHOIR