Sorry to Bother You: Worth the Hassle | Reviews | Creative Loafing Charlotte
Switch to the mobile version of this page.

Sorry to Bother You: Worth the Hassle

SORRY TO BOTHER YOU
*** (out of four)
DIRECTED BY Boots Riley
STARS LaKeith Stanfield, Tessa Thompson 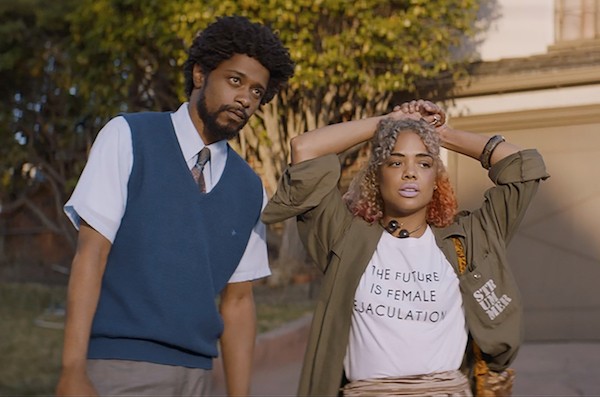 An outrageous and uncompromising assault on capitalism, consumerism, racism and other unpleasant -isms that have come to define these United States of America for all but the most myopic, ignorant or uncaring, Sorry to Bother You stars LaKeith Stanfield as Cassius Green, a struggling young man who lands a job at the telemarketing firm RegalView. Cassius is having no luck landing any sales until an older colleague (Danny Glover) informs him that he must adopt and employ a “white” voice.

Cassius takes his advice (David Cross provides the Caucasian vocals), and it’s not long before he becomes a raging success at the company. His meteoric rise gets noticed by Steve Lift (Armie Hammer), the CEO of a company (WorryFree) that promotes a modern version of slavery. Steve feels that Cassius is just the man he needs to take his plans to the next level, but is Cassius willing to sell out to such an unprecedented extent?

Written and directed by Boots Riley, Sorry to Bother You — based loosely on his hip-hop group The Coup's album of the same name, which editor Mark Kemp reviewed in CL in 2012 — is both bold and unpredictable, with radical characters (including Tessa Thompson as a fearless performance artist), a plethora of killer quips (Will Smith and Lionel Ritchie had best duck) and a smattering of ingenious sequences (the interlude where Steve forces Cassius to rap for a room of well-privileged whites is a mini-masterpiece).

It’s only after the potent first half that the film takes a turn into a truly fantastical direction. This gamble on Riley’s part will doubtless thrill many while turning off an equal number — personally, it didn’t wreck the movie for me, but I was disappointed that Riley felt such a lurch was necessary to bring his points home. The film’s structure — a simmering first half followed by a risk-taking back end — mirrors that of last year’s superb Get Out as well as the excellent “Black Museum” episode of Black Mirror, but whereas those challenging works eased into the outrage and thus made them believable and acceptable, this one steps too far over the line into occasional silliness.

Sorry to Bother You will remain one of this summer’s more memorable releases, but had Riley maintained a tighter grip on the reins, it might have resulted in a true cultural phenomenon.