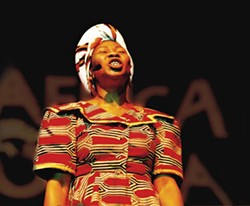 It's easy enough to coin the phrase "South by South Africa," the ersatz festival that is nearly midway through its run from January through June. Gathering groups from across the Metrolina region under this umbrella hasn't been too difficult for the Arts & Science Council. The lustiest contributors have been Winthrop University, the Levine Museum of the New South, the Afro-Am Cultural Center and the Light Factory.

Creating the crossroads that's coined in the phrase has been more elusive during this "Crafting Cultural Understanding" enterprise. Most of the events, tethered by the necessity of performing or curating existing artworks -- or swiftly whipping up new ones -- are firmly situated on one side of the Atlantic or the other. Symphony managed to drop a Nelson Mandela reading into its "Daybreak of Freedom" concert on MLK Day, and the Levine will be screening Double Vision on May 11, a film that documents the South African community in North Carolina.

UNC-Charlotte and Johnson C. Smith have been the most conspicuous MIA's in this worthy project, though the lackadaisical participation of the Char-Meck Public Library puts them in the same dubious class. The most ambitious new artwork in the "South by South Africa" experience has to be Johannesburg Stories, which Moving Poets Theatre of Dance brought to McGlohon Theatre for a five-performance premiere last week.

If the ASC needed a demo of what Moving Poets can accomplish with the funding their talents deserve, Johannesburg was it. Here at last was an artwork that zeroed in on the confluence that "South by South Africa" implies, the parallel legacies of Apartheid and Jim Crow. Organized by artistic director Till Schmidt-Rimpler, the newborn piece brought music, theater, dance, video and sculpture together in a fantasia that transcended the usual multidisciplinary Poets stew.

Credit that largely to the contributions of griot extraordinaire Gcina Mhlophe. From Mother Africa, she brought the gifts of song and storytelling in a uniquely engaging, joyful package. She spent more time transporting us to the rhythms and folklore of the Dark Continent than the oppression of Apartheid -- more time, in fact, on the uphill climb of her gender among blacks than the ravages of racism.

While Mhlophe was freshening Africa and its mythic enchantment, the depiction of the American South -- by the Poets and playwright Jim McLure -- was all too predictable, stereotyped and myopic. McLure has given Broadway Laundry & Bourbon and Pvt. Wars, but he definitely shortchanged Charlotte with a tedious series of dialogues between university profs, one black (Brian Daye) and one white (Randell Haynes), on the subject of petitioning against the Confederate flag on campus.

Coupled with an operatic Southern belle (Cynthia Farbman) singing "Dixie," we saw a dismal South that was decisively trounced by the vitality of Mhlophe's South Africa. Look away, indeed!

Fortunately, the Poets design team was inspired to new heights by Mhlophe's bravura. Costumes by MyLoan Dinh and Verna Witt were as eye-popping as they were exotic, beginning with the feathered outfits for "Bird Dance." Schmidt-Rimpler reveled equally in African motifs with his choreography, injecting the break-dance brio of Donell Stines at strategic moments to effectively bridge the South-South gap.

Too often in the past, Schmidt-Rimpler has slowed down the Moving Poets cavalcade by having his fine dance troupe elaborate upon dramatic action we've already seen. In Johannesburg, he brilliantly reversed the order with his climactic "Hat Dance," where the white dancers taunted a lone black by taking his leather hat and tossing it from one to another.

That ritual hazing served as a perfect preamble to Mhlophe's "Fly Hat Fly," where the hat becomes an emblem of oppression during Apartheid, jubilantly tossed into the ocean after that tyrannical era ends. By this time, thanks to her griot magic, Mhlophe was able to expand the exorcism beyond racism to war, poverty and all the self-inflicted prejudices and injustices that plague mankind.

Yup, Moving Poets has proven to be the top team players in the ASC's "South by South Africa" lineup. Hopefully that will earn them newfound respect at funding time.

Charlotte Symphony topped off its Pops season with a Carol Welsman visitation that yielded an unusually sophisticated mix of swing and jazz. For once, conductor Albert Schramm went easy on the microphone -- and into some challenging musical regions. A half dozen Gershwin faves from Porgy and Bess led off the concert. Then after intermission, CSO tackled a trio of outré time signatures in a medley of classics by Dave Brubeck and an uncredited Paul Desmond.

Welsman proved to be an alluring, disciplined and sometimes even affecting big band singer. You can't really claim to be scatting when you're reproducing Ella's improv word-for-word and note-for-note, but Welsman eventually traded some genuine 8's on "How High the Moon." More impressive were her singing -- and piano accompaniment -- on "A Nightingale Sang in Berkeley Square" and her joyous vocalise romp through Ellington's "Cottontail."

She even stayed to sign her companion Swing Lady, Swing CD. Nice gesture.

The dancing was as lovely as Tchaikovsky's music when the Russian National Ballet performed The Sleeping Beauty at Belk Theater. But the chemistry was a little weird in this final Carolinas Concert Association presentation of the season. As Princess Aurora, Olga Grigorieva didn't sport the virginal look of a 16-year-old. No, it looked like Grigorieva had cheated on her 100 years of beauty sleep and spent 20 of them fully awake.

Ruslan Mukhambetkaliev, on the other hand, was more than sufficiently callow as the heroic Prince Desire. He danced like a god, but his eyes wandered over the audience like a child in his first show. No warmth or mercy was forthcoming from his ethereal partner, who never deigned to make eye contact.

I was still charmed by the profusion of fluttery fairies, and Timur Kinzikeev was electrifying as the evil Fairy Carabosse. Marius Petipa's choreography, vintage 1890, retained its appeal whether Carabosse was hurling maledictions or Puss 'n' Boots were stealing the spotlight.

Remembering when Second City was synonymous with improv comedy, I was dismayed to find that Sex and The Second City was attempting to extend the brand into the realm of musical theater. There was telltale scenery at Booth Playhouse -- and a framework perilously close to a plot.

Energy and talent were still amply evident, particularly when Beth Crosby and Randall Harr broke away from the quartet and unveiled their triple threat dancing prowess. But the highlight of the evening came when Crosby & Harr hearkened back to Second City's roots as they gathered quips and suggestions from the audience, weaving them into a rollicking improv segment.