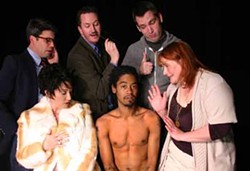 Thirteen years after Angels in America premiered in Charlotte, there is finally consensus about the controversy that broke our city into warring camps, exposed our provincialism to nationwide ridicule, and eventually resulted in the self-immolation of the Queen City's flagship regional theater company. Eric Coble, the playwright commissioned by Actor's Theatre of Charlotte to write a fictionalized account of our celebrated Culture War, came here late in 2007 to speak with people involved in the struggle. On one key point, he found surprising agreement.

The comic absurdity of it all will be center stage as Coble's Southern Rapture opens for previews this Friday night. With full frontal nudity, of course. Otherwise, how can Charlotte affirm that we've grown up since 1996?

"You've really got to listen to both sides of the story every time in order to form a good opinion," says Actor's Theatre artistic director Chip Decker. "The first time around, you had people screaming on both sides, and everybody thought they needed to be heard more than the next person. And eventually nobody was heard, because the screaming just became laughably loud."

Decker saw the comedic possibilities way back in the 1990s, when Actor's Theatre was still a tenant at Spirit Square and the embarrassment of Angels was beginning to dim. He convinced Dan Shoemaker, ATC's executive director, that the face-off between Charlotte Repertory Theatre and the Rev. Joe Chambers' army of Concerned Charlotteans was the stuff of a good play.

But it wasn't until 2004, when ATC had finally created its own home at 650 E. Stonewall St., that the project began to gain traction. When Coble came to Charlotte in conjunction with the company's production of Bright Ideas, Shoemaker realized that they had stumbled upon the kindred spirit to execute Decker's farcical concept.

Coble bit on Shoemaker's pitch, and he wholeheartedly agreed to a balanced perspective on the delicate issues of free speech and the proper use of tax dollars. Five years later, with the help of a patron's angelic $50K contribution, we can all look back in laughter. What we see through deftly distilled composite characters is the spectacle of theater people, religious zealots, politicians and media all behaving badly.

And just because we say Coble takes a balanced approach, don't assume he's gentle about it.

We're not explicitly in Charlotte. Instead, we're in "A City in the Southern United States" in February 1995. With a place called Myers Park not far from rehearsals of Rapture in America and a mayor, Winston Paxton, who devoutly hopes to land the 2004 Olympic Games in his hometown.

As one of the people whom Coble interviewed, I wondered why the playwright wasn't packing a microcassette. Reporters feel naked without one. Coble apparently wanted to avoid quoting any of his sources verbatim. Key people in the Angels melodrama weren't interviewed because Coble wanted to imagine them more freely. Rep artistic director Steve Umberger didn't sit down with Coble, and the playwright says he has never met Martin although he has spoken to him. Very briefly.

So the portrait of the managing director as publicity whore comes from Coble's imagination -- and his other sources.

"That seemed to be a common thread amongst people who did talk about [him]," Coble admits. "I mean, that's his job, to get people into that theater, whatever it takes. You get a golden opportunity like this, absolutely you're going to run with it and make something out of it."

Despite the biggest publicity and outreach campaigns in Rep's history, the opportunity didn't become golden until a Tony Brown feature on Angels in America fired up the front page of the Charlotte Observer on the same week that Part 1 of the seven-hour Pulitzer Prize drama was scheduled to open. While it may have been questionable to put that story next to everybody's morning coffee, the citywide furor that erupted in the wake of Brown's story was unquestionably big news.

With high drama. Until Martin and lawyer Bob Diehl appeared before TV cameras on March 20, 1996, brandishing a court injunction -- obtained one minute before a 5 p.m. deadline decreed by PAC president Judith Allen -- nobody was sure whether Angels would actually open at Booth Playhouse.

All of this heroic brinksmanship was necessary because, for a full eight seconds, actor Alan Poindexter would be exposing his peepee in public. With coverage in the New York Times, USA Today, Time, and a horrific live smackdown on Good Morning America that marked the apex of our embarrassment, media nationwide shone their fickle spotlight on Poindexter's penis and Charlotte's provincialism.