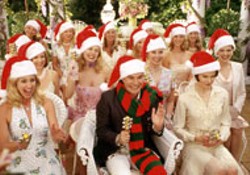 Once a highly respected screenwriter, William Goldman has sadly degenerated into a bitter hack who spends most of his time railing against those who, unlike him, have managed to remain in the upper echelons of the Hollywood hierarchy. But back during his glory days, between copping Oscars for Butch Cassidy and the Sundance Kid and All the President's Men, Goldman was handed the task of bringing Ira Levin's popular novel The Stepford Wives to the screen.

That 1975 effort, newly re-released on DVD (see this issue's View From the Couch section for a review), would hardly be mistaken for a classic, but it's obvious from the start that, thanks to the interpretation by Goldman and director Bryan Forbes (who rewrote some of the scenes), it's going to work as a sharp satirical thriller. In fact, the opening moments ingeniously sum up the entire movie's plot: As a married couple and their kids are leaving hectic New York City for the quiet pleasures of a New England suburb, they see a man on the street carrying a female blow-up doll. Little do they know that in their new hometown of Stepford, all of the wives are basically blow-up dolls, existing for the sole purpose of satisfying their men's every whim.

The new version of Levin's finger-on-the-pulse pulp, also titled The Stepford Wives, opens on a different -- but equally revealing -- note. When we meet Joanna Eberhart (Nicole Kidman), she's a head honcho at a popular television network, busy wowing a room full of stockholders and industry insiders with her ideas for more hit programs, all of them "reality" shows. This sequence is obviously meant to lampoon the whole "reality TV" craze as well as establish the movie's satiric bent, but the problem is that the shows that Joanna proposes, including one set on a tropical island populated with muscle-bound lunks, aren't that far removed from the nonsense that's already polluting our airwaves. It's as if scripter Paul Rudnick and director Frank Oz were suddenly inspired to take a page from Network, not realizing that they're running behind the times rather than ahead of them. Worse, this sequence hints at the clumsy attempts at comedy that will help destroy a story that, in more skilled hands, might conceivably have been successfully updated for a new generation.

Joanna's presentation turns disastrous, and faced with a multitude of lawsuits, the network quickly decides to fire her. In a show of support, Joanna's husband Walter (Matthew Broderick), the company VP, resigns from his post, and suddenly the pair and their two children (who appear briefly and then conveniently disappear for the duration of the movie) are free to blow town. They end up moving to Stepford, a quiet Connecticut suburb where everyone appears to lead happy, stress-free lives. But while Walter immediately takes to his new surroundings, Joanna and two other newcomers, blowsy author Bobbie Markowitz (Bette Midler) and mincing gay guy Roger Bannister (Roger Bart), immediately become suspicious of the fact that the town is almost exclusively comprised of nerds married to beautiful women who will do anything they request, from baking trays of cookies to fetching their slippers to having wild, passionate sex in the middle of the afternoon.

The Stepford Wives may well end up being the most ill-conceived movie of the summer, a ham-fisted attempt at social commentary that's further undone by last-minute tinkering on the part of its creators. The original Stepford film arrived at a time when the nation was still adjusting to upheavals instigated by rolling waves of feminist solidarity, and the movie shrewdly examined the manner in which certain men, feeling unsettled at having been knocked off their perches, might resort to any means necessary (including murder) to reestablish their retro world order. But in today's society, these issues have been largely settled (if not entirely resolved to everyone's satisfaction on both sides of the fence), and it would take a writer on top of his game to make the satire relevant and razor-sharp. Rudnick, alas, is not that writer, and Oz apparently was not the director to steer him in the right direction. The pair behind the amiable In & Out are satisfied to turn this chilling cautionary tale into a swishy camp outing, with more emphasis on snap-finger witticisms and immaculate decor than on anything of substance. This approach does draw some choice moments from Midler and Bart but leaves everyone else stranded (including Christopher Walken, whose neuroticism has been neutered for the role of the town bigwig).

Joanna is immediately established as a cruel, hardened woman who will sacrifice anybody -- family, friends, schleps dumb enough to appear on her shows -- to further her own career. Naturally, the point is that Joanna will over the course of the movie be thawed by her humbling experiences, but given Kidman's bristling performance, we're never allowed to effectively warm up to the character. Broderick, meanwhile, is stranded in a wishy-washy role that makes every decision his character takes seem wholly arbitrary.

Then again, "arbitrary" seems to define this entire movie, most notably a final half-hour that was reshot and now doesn't even line up with events that occur during the first part of the film! I'm generally not one to offer spoilers in my reviews, but anybody familiar with the book, the first film or even this new version's trailer will already know that the whole secret behind Stepford is that its women are robots. Umm, except they're not. Or that is to say, because the studio decided to scrap its original ending (presumably based on the white-bread opinions of those Average Joe Geniuses who attend test market screenings), they came up with a new finale that chucks out the entire robot concept (even after we've already seen robots in earlier sequences) and instead... Well, I won't spoil the "surprise," but be warned that after this ludicrous development, there's yet another final twist that manages to make the whole point of the movie irrelevant (and, some might add, misogynistic as well).

In short, if you were expecting this to end like the 1975 version -- with its downer of a curtain-closer -- don't hold your breath. A ridiculous epilogue, complete with a cameo appearance by that Stepford Host, Larry King, insures that you'll be leaving the auditorium all warm and fuzzy.

Wow, The Stepford Wives retooled as the feel-good movie of the summer! What will they think of next?