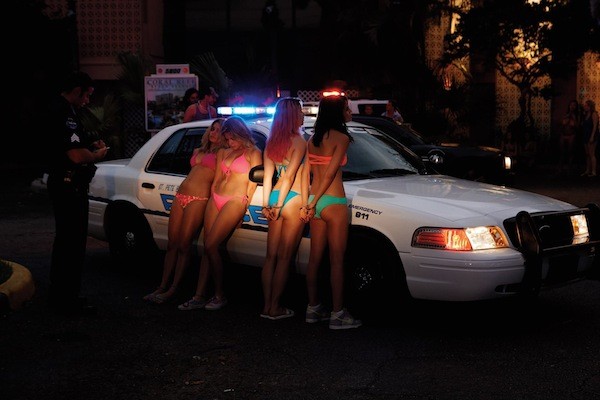 The latest gonzo endeavor from writer-director Harmony Korine (Trash Humpers, Julien Donkey-Boy), Spring Breakers manages to be a fever dream, a wet dream, a daydream and a nightmare all in one sitting. Recalling the glory days of MTV's spring break coverage, this film takes it a step or 12 further by also incorporating all the seedy encounters and sordid situations that logically might follow when this much sex, drugs and rock 'n' roll is put into play.

Two former teen princesses on TV, The Wizards of Waverly Place's Selena Gomez and High School Musical's Vanessa Hudgens, are teamed with Ashley Benson and Rachel Korine (Harmony's wife) to portray four college kids who make their way to St. Petersburg for the annual sun-sex-and-surf ritual. Gomez's aptly named Faith is the only one with any moral boundaries whatsoever, which means she's the one most upset when the nonstop fun is abruptly interrupted once the girls are arrested on a drug charge and subsequently bailed out by a gold-toothed, cornrow-haired, wannabe gangsta named Alien (James Franco).

Alien is a real piece of work, and Franco, woefully miscast in Oz the Great and Powerful, delivers one of his most absorbing performances (personally, I would have loved to see this character shaking up the land of Oz instead of that dullard of a wizard!).

Aside from Franco, though, the rest of Spring Breakers is impossible to defend, idiotic to criticize and impervious to easy interpretation. A formless first half full of repeated shots and snatches of dialogue gives way to a comparatively coherent second half that hinges more on a plot, and it's possible some viewers will embrace one portion while rejecting the other. Many more might embrace the entirety of the project, digesting it as a raw commentary on the vacuity of America's youth culture, while yet others will reject the whole movie as a disgusting and pointless wallow in depravity. But whatever the final verdict — and despite my mixed review, it strikes me as worthy of a repeat viewing — it's hard to imagine anyone will soon be forgetting it.

Spring Breakers is not showing in any theaters in the area.