The Stones are alive and kicking with satisfaction 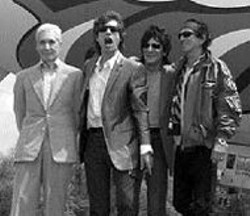 "The Beatles want to hold your hand but the Stones want to burn your town." -- Tom Wolfe"It's good to see everybody tonight," quips Keith Richards to fans at FedEx Field in Landover, MD, at a show earlier this month. "Hell, it's great to see anybody really," the jovial guitarist adds as he takes center stage to perform two songs during the Rolling Stones two hour plus set on their current Forty Licks World Tour.And why shouldn't Richards, who turns 59 in December, be the one to make light of his fascinating immortality? He's overcome heroin addiction, cheated death on more than one occasion and had numerous run-ins with the law. But more incredibly he's survived 40 years of rock and roll with a band that continues to defy logic with its own immortality as well.

Last month the Rolling Stones, consisting these days of Richards, Mick Jagger, Ron Wood and Charlie Watts, kicked off their latest tour to celebrate their 40th anniversary. The first leg, which will see the band playing over 40 dates in North America through February 2003, presently does not include Charlotte or North Carolina for that matter. Venues selected for the Licks tour included small clubs and theaters, arenas and stadiums. Next year, the tour will reach Europe, Australia, Mexico and the Far East.

"If I didn't think it would work, I would be the first to say, "Forget it,' Richards admitted to Rolling Stone last month in a cover feature. Apparently it seems to be working very well, however, as Fortune magazine recently reported the band as having generated $1.5 billion in gross revenue since 1989...and that's 27 years into their career. In fact, their Steel Wheels Tour in 1989, which generated $90 million for 45 shows in North America alone, stands as the fourth largest tour in pop history, according to Pollstar. Years later, their 1994 Voodoo Lounge tour also broke box office records by grossing $124 million. With tickets for the current Licks tour costing $50, $90 and $300 (depending on the size of the venue and the seat location) more records could be broken as well. And to think this is the band who once fought with promoter Bill Graham when he wanted to raise the cost of a $6.50 ticket by 50 cents.

Their monstrous concert tours of recent years aren't the sole source of revenue for the Stones either. Licensing deals, album and merchandise sales and income from sponsors have proved to rake in plenty of dough for the band, too. Their latest record, Forty Licks, a two-CD retrospective released earlier this month, debuted at number two on the Billboard album charts (ironically they couldn't knock another rock legend, Elvis Presley, out of the number one spot). And last week, its second week on the charts, Licks was down only one spot at the number three position, outselling much newer, and in some cases much hipper, artists, such as Xzibit, Disturbed, Keith Urban and Jurassic 5.

But do exorbitantly high sales numbers necessarily equal quality goods, one might wonder? Well, while David Letterman cracks jokes about possible tour names the Stones could use ("Hey! You! Get Offa My Barcalounger!" he teased them once), most reviews of the latest album and tour have been positive. "This band has something to sell besides memories," reported the Boston Globe in a recent live review of an intimate theater show, a setting where "creaky knees and creaky songs are impossible to hide" the reporter also noted. And Rolling Stone gave Licks a five star review along with an outstanding live review. Concurring is the Baltimore Sun that reported, "To see and hear them play the way they are during this tour and not be moved, in ways both joyful and profound, is to deny the power of rock and roll. To dismiss the Stones, even at this late stage of the game, is less a judgment call than a lack of judgment altogether."

While the band continues to nearly baffle some critics and skeptics with their ability to succeed as well as break new boundaries in rock revenue with each tour, money doesn't exactly appear to be the underlying motive. How could it be with the already enormous bank accounts these chaps must possess? "It's not something you retire from," Richards told the New York Times in a recent interview. "It's your life. Writing songs and playing is like breathing -- you don't stop."

But there are some things associated with the rock and roll lifestyle that a band with a collective age well over 200 (not to mention members with notorious bad habits) did have to stop. Earlier this month, the Washington Post described backstage for the current tour as being pretty mellow. "There's a wife and daughter around, but not a groupie in sight." Wood, who spent time in rehab shortly before the tour kicked off and whose dressing room area (yes, each member has his own room) is a booze-free zone, told the Post he spends most of his days on the tour painting the view from his hotel window. "It used to be crazy. All the circus surrounding it, the dope, the drinking. And we used to have some crazy fans back then...the ones that survived are still around, but they're on crutches."

These days, however, the band's staff (consisting of about 125 employees) includes someone to arrange trips to local sights as well as getting the lowdown on the nearest Pilates and yoga studios. "It could always be crazy if you wanted it to," Wood told the Post. "I've had a few good innings and I've calmed down."

Just how long the Stones will continue to roll is, however, something the band themselves can't manage to predict. "It's obvious we can't do this forever," Jagger told USA Today. "But it's pointless to speculate. I don't see the future beyond 18 months," he added. "I honestly don't know what we'll do." Richards, his musical partner (and noted rival as well) throughout this 40-year odyssey they call a career, said in the same interview, "We're in this game called rock and roll, predicated on the fact that you can't play after you're 18 or 20. We've broken the rules again. But when didn't we?"

The Rolling Stones will perform at Turner Field in Atlanta, GA, on Saturday, October 26. For more info, call Ticketmaster at 704-522-6500.