Elected officials haven't said much about CMPD Taser use 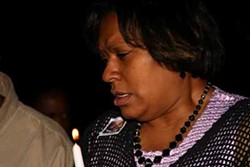 (Update: The Charlotte-Mecklenburg Police Department announced Wednesday that its Chain of Command Review Board found that Officer Jerry Dawson Jr'.s initial use of the Taser followed procedures but that prolonged use of the Taser did not.

Turner was Tasered for 37 seconds until he fell to the ground. When Turner did not then put his hands behind his back, Dawson discharged his Taser for five seconds. Dawson was suspended for five days, and CMPD continues to review its policies regarding Taser use.)

In the months that have passed since 17-year-old Darryl Turner was struck by a Taser at a Charlotte grocery store, the public has heard, to varying degrees, from the Charlotte-Mecklenburg Police Department, the Mecklenburg County District Attorney's office, and the attorney representing the teen's family.

Whom haven't they heard from? Elected officials. Charlotte City Council members and the mayor's office haven't yet weighed in on whether the city should remain one of 12,000 law enforcement agencies that employ Tasers or similar conducted energy devices.

With a lawsuit likely, they may not be likely to talk. Councilman Warren Turner, who heads the council's public safety committee and works as a parole officer, said he doesn't wish to rush to judgment after a single death. Whatever questions he may have, he said, he'll ask privately.

"I'm not going to expose my city and the taxpayers to any more legal issues," Turner said. "We're very well facing a lawsuit, and we know that. But I'm not going to give grounds to sue me on by asking that question from a public perspective."

Turner doesn't think the use of Taser is a council issue at this point.

"I don't see why we would indulge in that," he said. "Unfortunately, a fatality has occurred from one of our officers using them. But we've used them for some period -- and this will be our first [death], so I think that would be overreacting."

Mayor Pat McCrory's office did not answer a request for comment on Taser use.

Councilwoman Susan Burgess, the mayor pro tempore, said she hasn't heard discussion among council members, who now are operating on a slower summer schedule. Two years ago, she listened as Taser International representatives explained their products at a National League of Cities meeting. She came away thinking they were safer then than when they first appeared on the market.

"I had come to the conclusion that Tasers were better than bullets, but the death of a 17-year-old has made me rethink that," Burgess said.

Burgess said the matter could be worth council discussion. Usually, she said, "those on the public safety committee [would] initiate it. But if they don't, I might do it myself."

Attorney Ken Harris, who represents Turner's family, said he is still weighing whether to file suit. He disagrees with officials' interpretation of the events that unfolded March 20 at a Food Lion on Prosperity Church Road in northeast Charlotte.

Police have said that Officer Jerry Dawson Jr. answered a disturbance call from the grocery store and found a highly agitated Turner, a grocery clerk, throwing an object at the Food Lion store manager who had asked him to leave. He refused verbal commands and advanced toward the officer, whereupon the officer used his Taser.

Harris has seen video footage from Food Lion -- the tape hasn't been released publicly -- and contends the tape doesn't show Turner acting aggressively. "We also did not see on the videotape any evidence that Darryl looked at the officer in a menacing or aggressive way," Harris said. "There was also some suggestion that after collapsing on the ground, Darryl refused to obey verbal commands by the officer. Based on the videotape, it [appears] possible that Darryl did not have control of his faculties such that he would have been able to strictly obey commands by the officer. It's apparent that he was in distress."

Last month a federal jury ordered Taser International to pay $6 million after the 2005 death of a California man who died a day after being shocked repeatedly by police officers using Tasers. The jury found the company "should have more effectively warned police that Taser shocks were potentially dangerous," reported The Herald of Monterey, Calif.

Turner said eventually he expects Tasers to be classified as lethal weapons. Still, he said, the numbers of deaths from them are extremely low.

"People need to stay mindful of that," Turner said. "The only alternative we're put in a life-and-death situation is a lethal weapon, a firearm."

Human rights advocates -- among them the American Civil Liberties Union and Amnesty International -- worry that they're used in situations that don't warrant a lethal weapon.

Amnesty International says Tasers should not be used as a routine weapon to enforce compliance in the absence of a threat of serious injury or death of the subject, a member of the public or a law enforcement officer.

Nationwide, more than 300 men and women have died after being stung with Tasers, Amnesty estimates, and barring a substantive change in police policies, that number is only expected to increase.

"We're getting closer and closer to full deployment," Feuer said. In November 2004, about 5,000 law enforcement agencies used Tasers or similar conducted energy devices. By last November, that number had grown to 12,000 out of 18,000 agencies.

A two-year study by the U.S. Justice Department's National Institute of Justice found 99.7 percent of Taser use resulted in no injuries or mild injuries only.

A preliminary report from the study panel, which reviewed 962 incidents from six departments, concluded that, "Therefore, law enforcement agencies need not refrain from deploying CEDs, provided the devices are used in accordance with accepted national guidelines."

The report also says that "preliminary review of deaths following CED exposure indicates that many are associated with continuous or repeated discharge of the CED" and "caution is urged in using multiple activations' of CEDs." The panel is expected to release its final report in 2009.

Still, other studies have found risk associated with Taser use. The U.N. Committee Against Torture has urged the United States to use Tasers only as a nonlethal alternative to firing a gun.

Dwayne Collins, chairman of the Black Political Caucus, said he plans to meet with CMPD Chief Rodney Monroe this month to discuss deadly use of force, in light of recent shootings by police officers. Still, he said, "I would prefer a Taser as opposed to pulling out an actual firearm."