Sue Myrick and the Muslims 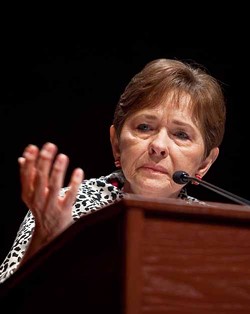 Sue Myrick delivered a good show last week during her townhall meeting with nearly 200 Charlotte-area Muslims. I don't mean Sue's dog-and-pony show about the humongous, ultra-critical, super-scary imminent threat of domestic terrorism by angry Muslims. No, the show we're referring to was the part where Myrick acted as if she gave a flying damn about what local Muslims thought or said.

Myrick told the media she was holding the meeting because she was "hoping to repair her relations with [the] Muslim community," and "build bridges." What was left unasked, however, is the glaringly obvious question: How do you build bridges you have spent so much time repeatedly burning? Although many of the Muslims in attendance politely thanked Myrick for meeting with them, there was little evidence of any real easing of tensions. In fact, the whole thing seemed like two separate meetings happening concurrently: in one, Muslim speakers criticized Sue for her inflammatory rhetoric; in the other, Myrick carried on about Islamic terrorists and claimed she'd been misquoted -- a lot.

Several speakers brought up Myrick's infamous 2003 comments about Muslims and convenience stores. She tried to defend the statement, saying it had been taken out of context, and "I wasn't off the wall." OK, let's do put that statement in context. After 9/11, many people were seeing Islamic terrorists behind every tree -- anyone else remember the tourist arrested in Uptown for taking videos of the Charlotte skyline? -- and in 2003, a small Muslim group in Charlotte was arrested for sending Hezbollah a portion of the money it had made by smuggling cigarettes. It was in that context that Myrick frequently spoke of her fear that Islamic terrorists were plotting against America everywhere you looked. As an example of what she was talking about, Myrick said, "Look at who runs all the convenience stores across the country." Even at that time -- i.e., "in context" -- she was roundly ridiculed for her xenophobia and fearmongering. As for "I wasn't off the wall," all you can honestly ask is, "Since when?"

Today, Myrick says her relatively new position on the House Intelligence Committee has made her privy to top-secret intelligence reports that reveal a huge, immediate threat from homegrown Islamic jihadists -- something that makes her want to yell, "Wake up, America!" That's great, but there's one more glaring fact that stands out: Other, more senior members of the Intelligence Committee have seen the same documents Myrick saw, and you don't see them getting all bug-eyed and trying to scare the daylights out of the public.

If Sue's freak-out over these scary documents seems somehow familiar, it's because she's placed herself in uncannily appropriate company. During the build-up to the Iraq war, Dick Cheney and Donald Rumsfeld, we now know, would cherry-pick specific intelligence reports that matched their own inner panic levels, even if the sources had been discredited (see The One-Percent Doctrine by Ron Suskind).

Myrick topped herself back in October, when she wrote the introduction to Muslim Mafia, a book written by one David Gaubatz, a confirmed anti-Muslim bigot who refers to President Obama as "our Muslim leader" and a "crack-head." Gaubatz charged that the Council on American-Islamic Relations, a nonprofit advocacy group, was a radical, pro-terrorist outfit that was planting radical Islamist spies as Capitol Hill interns. The charges, and Gaubatz's sub-flimsy "evidence," were dismissed as laughable by a multitude of congressional staffers, members of Congress, foreign policy experts, journalists, and even a former Republican N.C. cabinet member.

Yes, of course, there are some Muslims in America who'd like to commit terrorist acts, just as there are some really angry Christians who'd like to do the same -- guys like the abortion-doctor killer, or Eric Rudolph, or the Austin, Texas anti-IRS airplane guy. At least one speaker at last week's meeting asked Myrick why she's not just as devoted to fighting that type of terrorist. It's a legitimate question.

Myrick, though, as has been her habit at various times in her career, is latching on to one specific issue and obsessively flogging it for all it's worth. Too often, she has seemed to almost need to be riled up or panicky about something. If it's not teenagers being ruined by "Satanic" heavy metal music during her City Council days, it's the evil of traffic problems. If it's not traffic, it's coffeepots talking to her. If it's not Mr. Coffee coming to life, it's illegal immigrants wrecking American culture. And now, she's jacked to the gills over some intelligence reports (which, it's widely known, are very often all over the map in terms of believability -- or has no one else on the committee told her that yet?).

I give local Muslims credit for showing up last week to exchange views with Myrick. After all the baloney she has spewed about Islam for years, I give them credit for their patience.

I am not saying that Myrick is completely insincere. I'm sure that, aside from appealing to her GOP supporters, she really thinks she was "reaching out" to local Muslims last week, and she's no doubt dismayed that some of them "just don't get it." Myrick has always been what philosopher Eric Hoffer called a "true believer." She truly believes all the wacked-out stuff she comes out with. Always has. And to my mind, that's one of the best reasons to get her out of Congress.