Moving Poets Group is outta here, but not without a parting shot 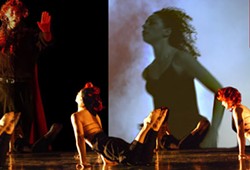 Nate Blackmon teamed together with Lee on the original compositions while W. Stanford Curtis spearheaded a swinging jazz trio from the keyboard. More memorable still were the occasions when Curtis abandoned his combo and sang, particularly his rousing hook-up with Lee on "Why," a Lee-Blackmon original.

Dramatic segments that stood out in BlackOut were "Colored Me," a monologue written by Jazmina Diva featuring Diva as Hurston, and "Love/Hate," showcasing Lee as poet Countee Cullen opposite Keith Roberts as Langston Hughes. Quandrico was fairly impressive as Nugent in his scene, "Richardo," hampered by the presence of Saundra Thomas as the interviewing reporter.

BlackOut is already booked at 2007 black gay pride celebrations in Detroit, Atlanta, and Columbia, S.C. Lee has also been asked to submit his play to the Black Theatre Festival, so an encore engagement in Winston-Salem is also possible.

Meanwhile, the web launch of BlackOut 2006 is scheduled at www.carolinasblackpridemovement.com on Dec. 18, Lee's birthday. Not only will the soundtrack be available online, but an edited video recording of the show -- plus behind-the-scenes footage and commentary -- will also be posted. That should transmit some of the electricity from the live performances at the Afro-Am, including a slice of JaJuana Moonie's dancing and choreographic prowess.

HEY. SOMETIMES downsizing works out. Witness the abbreviated version of The Spitfire Grill, the co-production by Davidson Community Players and Mooresville Community Theatre that finished a split run in its two parent towns on Nov. 19. While Spitfire was switching gears from the Davidson United Methodist Church Chapel to the Charles Mack Citizens Center in Mooresville, a streamlined version of the musical was taking first prize in statewide competition at the North Carolina Theatre Conference here in Charlotte.

The 96-minute version that I caught in its final matinee at the Mack -- a gorgeous facility, by the way -- had to be shortened to 60 minutes to participate in the NCTC competition.

"Less than that," corrected director/designer Melissa Ohlman-Roberge when I congratulated her at intermission. "If you go one second over your 60 minutes, you're disqualified."

Watching the production, I had no difficulty discerning the reason for Spitfire's success. Her name is Lisa Smith, past winner of Creative Loafing's best musical actress awards for performances in Oliver! and Cabaret. As ex-con Percy Talbott, who attempts to find balm for her shattered life in Gilead, Wis., Smith embraces a role she was born to play. Her backwoods accent and her Linda Ronstadt timbre sound exactly like what James Valcq and Fred Alley must have had in mind when they wrote their book and score, taking Lee David Zlotoff's 1996 movie as their inspiration.

To Ohlman-Roberge's credit, the rest of the Spitfire cast usually looks like it belongs on the same stage with Smith. Will Charlotte audiences ever get to see this production?

Don't bet against it. The Mooresville matinee may have been the last full-length performance of Spitfire, but the Slimfast version goes on to regional competition in Atlanta, where the Southeast Theatre Conference meets on March 8-10. If the Davidson-Mooresville entry clicks in Atlanta, then it's on to the National Community Theatre Festival. Two winners will represent the Southeast at AACTFest '07 to be held here in Charlotte on June 18-24.

If Spitfire wins in competition here, I'm guessing that a full-length revival will not be far behind.

READERS MAY remember when I wrote about witnessing the opening of the Four Seasons Performing Arts Center in September and Canada's first complete production of Wagner's Ring Cycle. It's fair to say that I tossed a barb in the direction of Opera Carolina when I cited the fact that, in its 59th season, our opera company hadn't voyaged any further into Wagner than The Flying Dutchman.

So did OC leadership take umbrage at my comparison? Not at all. Three days after the piece ran, OC general director and principal conductor James Meena shot me an e-mail that contained a bravo in its opening paragraph.

"It seems ESP is in the air," Meena continued. "We've been trying for three years to program either Die Walkyrie or Tannhauser and have run into so many obstacles each time that I eventually abandon those attempts. The problem, surprisingly, is not money, but schedule. Because of the tight schedule at the PAC, the most time we ever get in the theater is 12 days -- for tech, rehearsals and performances. Singers just aren't willing to sing 3 performances of one of these titanic pieces on this schedule -- it is grueling, so what we've tried to do is spread out the performances, which, as I said, on our schedule is nigh to impossible.

"Our latest attempt is for a Walkyrie in 2009, but only scheduling 2 performances, which will allow us to spread them out and give the singers the type of schedule that will ensure a good performance. But, I'm not sure that will work either. Hopefully, with the opening of the new Wachovia Theater down the road, the schedule will free up, and we will be able to schedule all our performances over a two-weekend schedule -- much, much better.