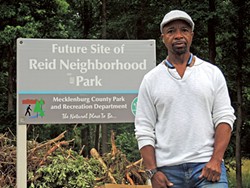 When residents of Reid Park, a community just west of Uptown, saw the doors close to the Amay James Recreation Center in 2008, they knew the doors were closing on the neighborhood's only after-school option for kids.

"That had a detrimental impact on our community," said Rickey Hall, president of the Reid Park Neighborhood Association (RPNA). "It's safe to assume that when you lose these amenities, you're going to see an uptick in crime. You see kids who don't have a place to play and that leads to other types of troubles."

The neighborhood experienced shootings, home break-ins, vandalism and other crimes in the years to follow, which RPNA members believe were directly related to the closing of the rec center.

"That's all connected, you tie it to public parks and lack of open space and places to recreate," Hall said.

Instead of hiding in their homes and making excuses about lack of public space, residents made a plan. They brought back a youth mentorship program in the neighborhood that had long been discontinued. They advocated with a new intensity for city leaders to support a park they had been fighting for for 25 years. In August, Reid Park residents will finally celebrate the opening of Reid Neighborhood Park.

It's this self-motivation that made Reid Park a perfect fit for community engagement group Sustain Charlotte to offer a helping hand in the form of its Sustainable Neighborhoods Program. This grant program, funded by Wells Fargo, brings Sustain Charlotte organizers into lower-income neighborhoods to help residents create long-term sustainability plans for their community.

With the help of Sustain Charlotte, Reid Park residents have now created a proactive plan to deal with issues like street safety, littering and park maintenance that includes short- and long-term goals with resources to help reach them. They say it has been a relief to start seeing projects get done, especially as they enlist the community's youth to complete them.

The list of neighborhoods ranges from hipster hotspots like Plaza Midwood to struggling communities like Reid Park, for which priorities can be much different but can be tackled in similar ways.

"We're seeing patterns emerge in how we can facilitate discussions in a diverse group of neighborhoods," said Meg Fencil, education and outreach program director with Sustain Charlotte. For example, many of the neighborhoods have included litter clean-up in their sustainability program, and that has had different positive effects on each community based on its specific needs.

The program is designed to help with sustainability issues such as transportation, access to green space, food and water and the conservation of waste and energy. The grant does not target crime, but Reid Park residents have found that efforts as simple as picking up trash can have a profound effect on area youth.

The program includes a $500 grant offered to each participating neighborhood to be used as they see fit. Reid Park used their grant to offer $20 stipends and meals to youth who helped clean up neighborhood streets and the site where the park will soon open.

The clean-ups, held twice a month on Saturday mornings, connect youth together with Reid Park's senior leadership. Hall said the stipends help familarize kids with having their work valued, setting them up to hold down jobs in the future.

"A kid who works in the community has to do the same thing as a kid who works at a job," he said. "We start at 9 a.m. If you're here at 9:10, go back and come again. There are all the same aspects: being respectful of the adult mentors and being respectful of the fellow youth in the program. It's about life skills, learning positive skills and habits that can transfer into a long term and fruitful, productive life."

Neighborhood leaders say the clean-ups are also breaking down barriers that once led to violence.

"The neighborhood has been sectioned off, and there's a gang thing going on now," said Jamie White, vice president of RPNA. White recently brought back the youth mentorship program he participated in as a Reid Park youth three decades ago.

Hall said kids from nearby Arbor Glen and Canton Park neighborhoods, once viewed as rivals, have joined in recently.

"That's the whole social capital aspect," Hall said. "Building the social capital in the community and reducing the chance for violence and gang activity, increasing the opportunities."

Officer Chris Herron, community coordinator for CMPD's Westover division, says officers have noticed a drop in crime in the area over the last year, but a recent rash of shootings has police back in the neighborhood regularly.

Two miles away, in Wilmore, gangs aren't a concern, but similar beautification efforts from residents, with Sustain Charlotte's help, have led to the installation of Charlotte's first edible walkway. Residents hope the walkway, planted with fruit trees and vegetables, will not only feed but educate youth in the community.

Kris Steele, 30, has lived in Wilmore for two years and is part of a gentrification the community has experienced in recent years. Each weekend, a group of 10 local children join him and his wife in their backyard garden and offer to help, but their questions during these sessions troubled him.

"One kid saw yellow on a plant and he asked me if it was butter, if that's where butter comes from," Steele said. "You start to ask these kids and they don't know where food comes from."

Planning sessions with Sustain Charlotte, along with a grant from city program Keep Charlotte Beautiful, helped bring the edible walkway idea from "beer chats" amongst neighbors to fruition. Now Steele hopes it can help educate the steady stream of youth from surrounding areas who cut through Wilmore on the way to a local convenience store to buy "food" (quotes from Steele).

During their meetings, residents agreed to place the walkway between a street known for such pedestrian traffic and Calvary Methodist Church, where schoolchildren have already begun to learn about the food-growing process and can continue to expand on the walkway.

"I think it comes down to people. We have a number of individuals who create a collective in this space that create a momentum for change, people who see things and rather than just talk about it they get behind it," Steele said. "Sustain Charlotte was the central piece of that, bringing people around to talk about what could be, and when those ideas get out and sit in a space, a cauldron, they brew and essentially we turn those ideas into a reality."

Serving as a conduit for residents' own desires is key to the success of the Sustainable Neighborhoods Program, Fencil said.

"We realize the projects we help to facilitate are only successful when there's a core team of committed residents," Fencil said. "That's inherent in sustainability: it has to come from within the community. We can be a resource for that but we can't come in and make it happen. If we try to impose our ideas on them, that's not sustainable."

Darcel Fennell, treasurer of RPNA, said it was "crucial" to let neighborhood residents be the ones to design the plans and then carry them out.

"We're the ones that live here. Of course, we appreciate the help and all that, but we live here and we know what we want for the community," she said. "It feels good to see that the ground is moving. It feels good to see that everything we talked about is coming to pass. We appreciate all the grants and all the help but, first and foremost, we need to be heard. This is our living situation."

In 2015, Sustain Charlotte will work with Arbor Glen residents on similar sustainability plans and continue to work with Reid Park to encourage more community involvement. The organization has also returned to Grier Heights in east Charlotte, one of the first grantees in 2012, to begin work on sustainable transportation plans.