T for Terrific | Features | Creative Loafing Charlotte
Switch to the mobile version of this page.

Also for thrilling, topical and thought-provoking 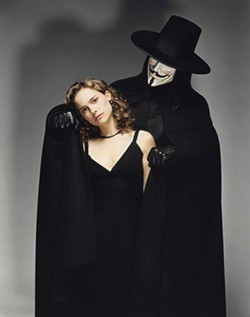 One irate citizen's Margaret Thatcher is another's George W. Bush, which might explain why writer Alan Moore has distanced himself from V For Vendetta, the big-screen adaptation of his influential graphic novel.

Penned in 1989, Moore meant for his work to be taken as an indictment of Thatcher's conservative platform in England. The screen version, filtered through the sensibilities of Hollywood players such as the debuting director James McTeigue, producer Joel Silver and the writing-producing team of the Wachowski Brothers (all of whom were involved in making the Matrix trilogy), has been upgraded for a new chapter in world history. The Great Britain of the 1980s remains, but it's now forced to share space with the United States of the 2000s.

Like so many other recent blockbusters, V For Vendetta can be viewed on two different levels. In one respect, it's a typical big-budget FX affair, not the sort that rolls off the assembly line but the type that shows that as much creativity as dollars went into every aspect of the production -- including the screenplay (see also Minority Report, King Kong, Spider-Man, etc.). Yet on another level, it can be viewed as a thinly disguised assault on the present state of the union, a wake-up call to Americans disgusted that their country has been hijacked by criminals, traitors and warhawks.

Set in England in the year 2020, V For Vendetta envisions a world that's been torn apart by all manner of conflicts. The United States, we're told, has fallen as a superpower and now lays in ruins, largely destroyed by a civil war from within. England, meanwhile, struggled with a dreadful plague that killed thousands but has since reemerged under the rule of a fascistic government headed by Chancellor Sutler (John Hurt). In this Orwellian landscape, dissidents, intellectuals and homosexuals all meet with the same fate -- execution -- while all news is filtered through the sensibilities of a government-sanctioned TV network.

Evey Hammond (Natalie Portman) is a low-level worker at the TV station, yet she's also the daughter of political activists who were dragged off -- and summarily murdered -- by government thugs when she was still a child. Like most Britons, she lives in fear of the ruling body and keeps her head down in an ongoing attempt to remain clueless about the atrocities surrounding her. But that's before she meets V (Hugo Weaving), an eloquent swashbuckler who sports a Guy Fawkes mask and speaks of a regime change.

A man of mystery, V subscribes to the theory of a radical revolution, of achieving freedom by any means necessary. He refuses to apologize for his violent actions, and while Evey gradually comes to understand his goals, she can't quite commit to his methods. Meanwhile, Chancellor Sutler will stop at nothing to remove this thorn in his side, and his administration largely depends on the efforts of dogged Chief Inspector Finch (Stephen Rea) to locate and apprehend the masked man.

V For Vendetta is that rare blockbuster that's interested in words more than action. That's not to say the picture doesn't contain its share of explosive set pieces and dashing derring-do, but its import rests in the muddy waters it navigates. What exactly divides a terrorist from a freedom fighter? V's mission to take down Sutler involves blowing up lots of prime real estate (indeed, the movie's November 2005 release was delayed partly to distance it further from last July's London bombings), and those in charge refer to him simply as "the terrorist." But when a government is as rotten as the one seen here, does the end justify the means?

Or is the loss of innocent life the dividing line? No civilians are ever killed by V's actions, which allows movie audiences to throw their support fully behind the vigilante. Yet if one of V's bombs had killed a child, would that automatically qualify him as a terrorist? The situation becomes even more complicated when one brings real-world issues into the debate. American bombs are constantly killing innocent Iraqi children -- does that make us terrorists as well? To its credit, V For Vendetta tosses around a hornet's nest of difficult questions yet never presumes to have the answers. It's as unsettling as it is exciting, which may not exactly stoke word of mouth but will placate discerning filmgoers tired of being spoon-fed their movies.

When I reviewed Batman Begins last summer and commented on the scenes that took the Bush administration to task -- particularly the moment when Morgan Freeman's Lucius Fox shows Christian Bale's Bruce Wayne suits designed to withstand enemy firepower, only to note that the government didn't buy them because they felt $300,000 was too much money to spend on each soldier -- I received a handful of e-mails from readers who felt I was reading too much into the movie and that it was simply a popcorn flick, period. I'll be interested to see if I receive similar missives dismissing this film in the same manner -- if I do, I'll be forced to accept that ostriches aren't the only creatures with the ability to bury their heads in the sand. Admittedly, some of the allusions skewer more toward the Nazi regime than the Republican Party (though many will persuasively argue that they're one and the same), but how to deny the topicality evidenced in the scenes involving detainment centers where prisoners are hooded, humiliated and tortured, or the presence of a TV station that's unabashedly pro-government, or an administration that instills a vague fear of foreigners to quiet the teeming masses, or a ruler who uses faith-based initiatives to crush opposing viewpoints? Meanwhile, those charitable toward Colin Powell might even see him in the character of Inspector Finch, a decent man too cowed by his bosses to outwardly question their motives. I suppose the only real question is whether a hatemongering right-wing TV host (Roger Allam) is meant to represent Bill O'Reilly, Pat Robertson or Rush Limbaugh, though ultimately I guess it doesn't really matter.

Because his face is hidden behind an immobile mask, Hugo Weaving relies on his voice and movements to bring life to the role of V -- he succeeds even when the script fails to sufficiently flesh out the role. Yet the performer to watch here is Natalie Portman. Heroines in fantasy flicks often get swallowed up by the extravagance surrounding them, yet Portman's work is excellent, existing on a par with Aliens' Sigourney Weaver, The Terminator's Linda Hamilton and King Kong's Naomi Watts. Portman has always displayed formidable acting chops, but here she takes another major step forward. Evey Hammond grows up over the course of the film, and it's invigorating for audiences to have the luxury of watching the actress mature right alongside her character.