Brad and Angelina both get the job done 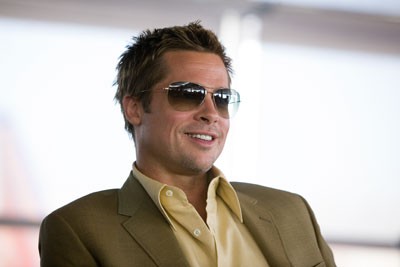 If America's "news" outlets aren't busy reporting on the bad behavior of imbecilic starlets and socialites, they're generally taking pains to track every movement — taken separately or in unison — of those gorgeous creatures known as Brad Pitt and Angelina Jolie (in other, apparently less significant news, there's still some ill-advised, U.S.-sponsored skirmish going on in the Middle East). With so much unwanted media attention, it's a wonder that our dynamic celebrity duo gets anything done, but here we have Jolie headlining and Pitt producing A Mighty Heart while Pitt also lends his star power to Ocean's Thirteen. That both films turn out to be recommendable would seem to be beside the point for those only interested in real-life dirt, but for fans actually plunking down the dollars for admission, it's, needless to say, completely the point. 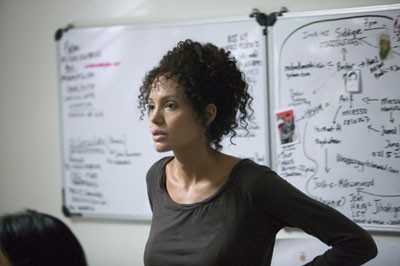 A Mighty Heart (*** out of four), the sort of heavy drama that generally gets released in the fall, proves to be a fine summertime distraction for discerning older audiences, even if it doesn't quite pack the punch of similar titles like Missing and Under Fire. Yet films about idealistic Americans abroad (usually journalists) work more often than not, and this one's no exception.

Based on Mariane Pearl's book A Mighty Heart: The Brave Life and Death of My Husband, Danny Pearl, the film finds Jolie delivering a restrained performance as Mariane, whose husband (played by Dan Futterman), a Wall Street Journal reporter, is kidnapped while the pair are living in Pakistan in 2002. Six months pregnant, Mariane tries to stay optimistic in the face of this grim situation, using her own sources to track him down while also relying heavily on the aid of the Pakistani anti-terrorism unit, American diplomats and the FBI. In fact, her outer fortitude is occasionally misinterpreted as a lack of concern (i.e. the Lindy "The dingo's got my baby" Chamberlain syndrome), which leads some to foolishly question her devotion to her husband.

But all that matters to Mariane is having her spouse returned to her, and, given Hollywood's propensity for promoting American know-how as well as its can-do attitude, it's perhaps the movie's most surprising development that the efforts of the Pakistanis — not the U.S. law officials — go the furthest toward cracking the case and bringing the terrorists to justice. As the local lawmen and their stoolies scour the streets looking for any clues that will help them find Danny, we realize this isn't like looking for a needle in a haystack — it's like looking for a needle in the Atlantic Ocean. So when their tireless efforts lead to real success (muted by the final outcome, of course), it's a testament to their determination and resourcefulness.

The real Mariane Pearl is a Frenchwoman of Afro-Cuban and Dutch heritage, but the minor stir caused by the casting of Jolie will soon be dissipated in the face of her exemplary performance in the role. Yet the real talent to watch in A Mighty Heart is Indian actor Irrfan Khan, who figures prominently as the sympathetic Pakistani captain who employs whatever methods are required to locate Danny Pearl. The Bollywood mainstay's work in this picture is impressive enough on its own terms, but when coupled with his superb efforts as the Indian immigrant in the spring sleeper The Namesake, it's obvious that here's an international star whose skills apparently know no boundaries.

The Return of the King aside, isn't it accepted — in fact, isn't it pretty much gospel — that the third picture in any given trilogy is when the series has totally lost it, when the filmmakers have been completely replaced by pimps and profiteers? So how is it possible that Ocean's Thirteen (*** out of four) has emerged as the best of this star-studded franchise?

True, all three films have basically been an excuse for director Steven Soderbergh and his high-voltage friends to take paid vacations in trendy, plush locales under the pretense of making motion pictures — if life was fair, then resort timeshares would have been handed out with movie tickets so that audiences could also join in the festivities. But Ocean's Thirteen is the first of the trio to truly feel like there's something at stake in its convoluted, house-of-cards plotline. Male-on-male love (platonically speaking, of course) has always been the driving force in this series (even in the 1960 Rat Pack original from which these new works emanate), and this one milks that sense of camaraderie for all it's worth.

The boys are back in town for this latest chapter, and the action begins when one of the group's senior members, Reuben Tishkoff (Elliott Gould), gets swindled by a venal casino owner named Willy Bank (Al Pacino), who cheats Reuben out of his share in a swanky new Las Vegas casino. The incident leaves Reuben near death's door, and Danny Ocean (George Clooney) decides that they owe it to the old-timer (who was his former mentor) to set matters straight. Thus begins an elaborate scheme that finds Rusty Ryan (Brad Pitt) posing as an environmentalist, Linus Caldwell (Matt Damon) disguising himself as an underling with a generous proboscis, and Basher Tarr (Don Cheadle) passing himself off as a stunt cyclist. Yet even all of these cons don't quite get the job done, forcing the team to reluctantly turn to their old nemesis, Terry Benedict (Andy Garcia), for assistance.

Because there are so many characters competing for attention (think back to how poorly utilized Damon was in the first flick), there will always be casualties when it comes to screen time. In this installment, it's Bernie Mac who gets hit the hardest — he's only allowed one scene in which he's allowed to strut his funny stuff. Yet because this is the most briskly paced of the three, and because the revenge angle provides its protagonists with a strong rooting interest, it's hard to get bogged down in the flaws. I wasn't a fan of the previous two pictures in this series, but Ocean's Thirteen qualifies as the first to even approach a winning hand. 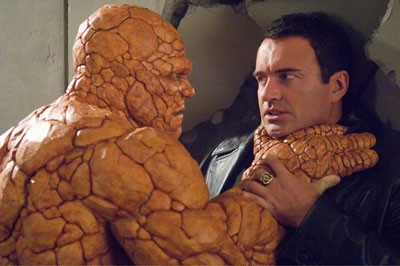 It remains a mystery how the 2005 superhero yarn Fantastic Four grossed $154 million stateside, considering that most of its special effects were on the level of a 6-year-old floating his plastic boat in the bathtub. (The cheapie end result also begged the question of where, exactly, did the film's $100 million budget go?) But somebody filled theater seats, and as a result, we now get Fantastic Four: Rise of the Silver Surfer (*1/2 out of four).

The good news is that, this time, 20th Century Fox has ensured that much of the loot is visible on the screen. The effects are a vast improvement over those in the previous installment, particularly the CGI-created Silver Surfer — while his conceptualization isn't quite as impressive as those of his distant "cousins," the T-1000 in James Cameron's Terminator 2: Judgment Day and the aliens in Cameron's The Abyss, he's still a cool creation to behold, and certainly faithful to his comic book counterpart.

Would that the rest of this picture inspired similar admiration. Instead, FF2 suffers from the same ailments that made the original such a drag: ham-fisted direction, stilted dialogue, the fumbling of a classic villain, and Jessica Alba attempting to emote.

Returning helmer Tim Story does manage a bit more visual pizzazz this time around, and the script by TV heavyweights Don Payne (The Simpsons) and Mark Frost (Twin Peaks) sets up some mildly interesting conflicts, not only between the heroes and their adversaries but also among the team members themselves: group leader Reed Richards/Mr. Fantastic (Ioan Gruffudd), fiancée Sue Storm/Invisible Woman (Alba), Reed's best friend Ben Grimm/The Thing (Michael Chiklis) and Sue's kid brother Johnny Storm/Human Torch (Chris Evans). Personal issues get thrust onto the backburner, though, once the Silver Surfer (voiced by Laurence Fishburne) flies onto the scene with the intention of destroying the planet. The team must work fast to contain this intergalactic menace, with their efforts hampered by the return of their old nemesis Dr. Doom (Julian McMahon).

Victor Von Doom ranks as one of the comic world's all-time best villains, yet in both FF films, he's about as threatening as the parking valet at a ritzy restaurant (and wait till you see how the filmmakers botch another great villain, the planet-devouring Galactus!). McMahon's dull efforts in the role are just one of several wince-inducing factors in this film, others being Alba's painful-to-watch performance as the plucky Sue and the strained banter between Johnny and Ben.

The Fantastic Four comic book, the title that began the Marvel boom back in the 1960s, deserves far better treatment than what we've been witnessing on the screen — if ever a film franchise needed to come equipped with a Reboot button, it's this one.